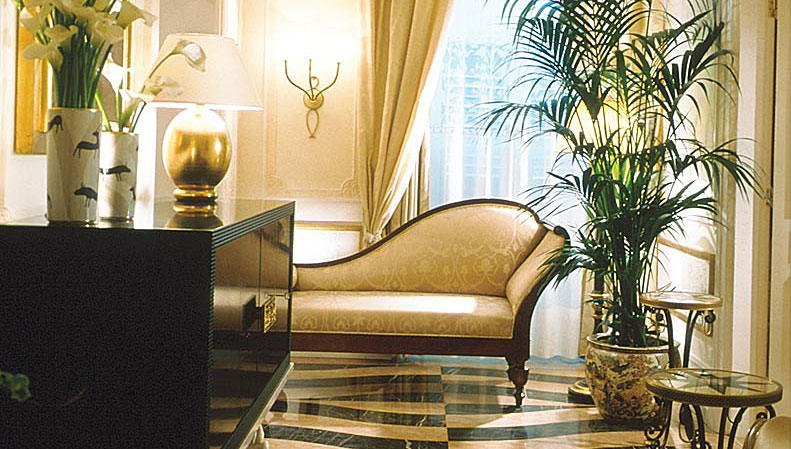 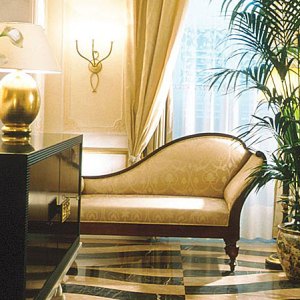 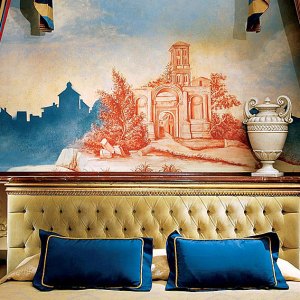 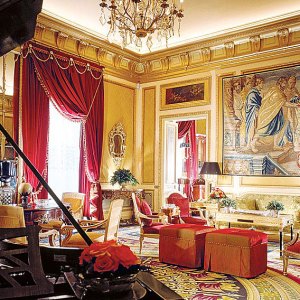 When César Ritz opened Rome’s Le Grand Hotel in 1894, the Swiss hotelier introduced new levels of luxury and sophistication to the Italian capital. Indulgences such as private baths—and innovations including electric lighting and central heating—dazzled guests of the palace-like property near the then-new National Museum of Rome. The Grand, as it long has been known, continues to set the standard for Roman hotels, but it does so now largely through its emphasis on history and heritage. Entering the lobby of the Grand is akin to walking into a modernized 19th-century Italian palazzo. Past the black-and-white-checkered marble floor is the aptly named Grand Hall, a Pantheon-like setting with a domed ceiling and lofty Corinthian columns. The Salone Ritz—the first ballroom in Rome—hosts the city’s biggest soirees beneath Murano crystal chandeliers and a handpainted ceiling that rivals that of the Sistine Chapel. The pairing of past and present continues downstairs, where, just across the lobby from the ultra-contemporary Vivendo restaurant, a small wooden door conceals a spiral staircase that leads down to an ancient wine cellar. Like this hidden chamber, which can be reserved for intimate dinner parties, the Grand is far enough removed from Rome’s tourist traps to impart a homey, secluded, and timeless ambience within the Eternal City. Accommodations Opulence abounds in the 138 guest rooms and 23 suites, many of which include antique furnishings and frescoed walls. Facilities Heads of state and other high-profile visitors will appreciate the discreet diplomatic entrance, which features its own private garage and elevator. The hotel also has a fitness facility with saunas and two spa treatment rooms, as well as a new Ermenegildo Zegna boutique. Dining Step through a small door and climb down a winding staircase to di Vino, a wine cellar where parties of as many as 14 guests can enjoy intimate meals surrounded by Diocletian bath stones and a selection of more than 600 vintages. More extroverted guests will enjoy modern Mediterranean fare at Vivendo or drinks at the recently remodeled Le Grand Bar. Concierge Recommends The St. Regis Grand was the first hotel in Italy to offer 24-hour butler service, so take a break from the crowds of Rome and enjoy an evening of pampering in your suite. Rates From $1,140 for a superior room to $18,500 for the Royal Suite.