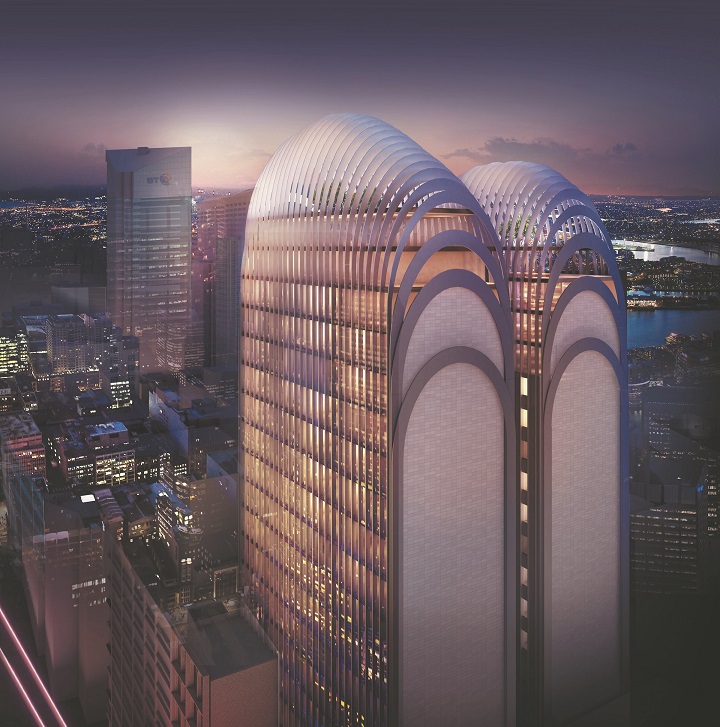 (Sydney, Australia) February 5, 2015 – An Australian property developer has won a prestigious Singaporean property award for its innovative residential development in the heart of Sydney’s CBD.

The awards celebrate the best of Southeast Asia’s residential property developments and highlight 14 winners from 65 nominees across the region.

Crown Group Country Director Singapore Karen Chia accepted the award on Friday. “We are honoured to receive this award, particularly because it is a People’s Choice award voted for by people here in Singapore. We’ve been so heartened to see the popularity of Sydney by Crown in Singapore,” Mrs Chia said. “Sydney by Crown is an exceptional building.”

Located at 161 Clarence Street development, Crown Group achieved an impressive $173 million in sales within four hours at the same-day launch of Sydney by Crown in Sydney, Indonesia and Singapore in November, after reaching its $100 million sales target within two hours.

Crown Group Chief Executive Officer Iwan Sunito said the success of the Sydney by Crown launch was reflective of a growing demand for high-end property in Sydney. “Sydney by Crown is set to become one of Sydney’s architectural centrepieces, a globally recognised icon, designed in Sydney, for Sydneysiders. Sydney by Crown has captured the attention of the world,” Mr Sunito said. “We pride ourselves on tapping into local talent and providing a platform for local architects and suppliers to be seen on the world’s stage.”

iProperty.com Singapore General Manager Mr Sean Tan congratulated the award winners. “These developers have shown the highest standards of innovation and design, and have now been recognised by Singapore’s first and only property awards selected by consumers. Now in our third year, we received a record number of votes, demonstrating consumer interest in and appreciation of standout properties,” Mr Tan said.

Designed by internationally renowned Koichi Takada Architects and chosen from a selection of world-class designs during an international design competition, the 25-storey building will feature heritage-inspired lower levels transitioning to a modern glass-and-steel tower, capped with dozens of steel arches.

The unique arches will envelope the tower’s rooftop bar and garden, forming a striking addition to Sydney’s skyline. Lower levels will include an eight-storey cathedral-like atrium rising 20 metres above street level over a new public laneway between Kent and Clarence Streets, joining historic Skittle Lane. Sydney by Crown will also be home to a collection of Crown Suites.

The tower will be within walking distance to Sydney’s new waterfront precinct at Barangaroo, new Sydney Convention and Exhibition Centre, Wynyard station and Darling Harbour.

With a current development pipeline worth more than $3.8 billion, Crown Group is continuing its reign as one of Australia’s fastest growing property developers. The Sydney-based developer will launch a number of new projects this year including Crown Ashfield and the award-winning architectural landmark development Crown Green Square.

For more information or to register your interest visit www.crowngroup.com.au

Iwan Sunito graduated with Bachelor of Architecture (Hons) and Master of Construction of Management from University of NSW. In 1993 Iwan became a Registered Architect in NSW and was awarded the UNSW Eric Daniels award for excellence in residential design. In recent years Iwan received a number of awards including Indonesia’s Property & Bank Magazine Golden Leadership Award 2013, the 2013 Congress of Indonesian Diaspora Entrepreneur award and named a winner in the 2013 Ernst & Young Entrepreneur of the Year Awards.

Since the company was founded 18 years ago, Crown Group has successfully completed major developments in Sydney’s best locations including Bondi, Bondi Junction, Parramatta, Ashfield, Epping, Homebush, Newington, Pennant Hills and Rhodes. Today, Crown Group boasts a $3.8 billion portfolio of projects under development and in the pipeline and is currently developing four major projects; Viking by Crown, a 10-storey residential complex in Waterloo, V by Crown, a 29-storey residential tower in Parramatta, Skye by Crown a 20-storey development in North Sydney and Sydney by Crown in the heart of Sydney’s CBD.

After selling out Top Ryde City Living in October last year, Crown Group launched Sydney by Crown in November, resulting in more than $170 million in apartments sold within four hours. Crown Group will launch a number of projects this year including Crown Ashfield and the award-winning architectural landmark development Crown Green Square.