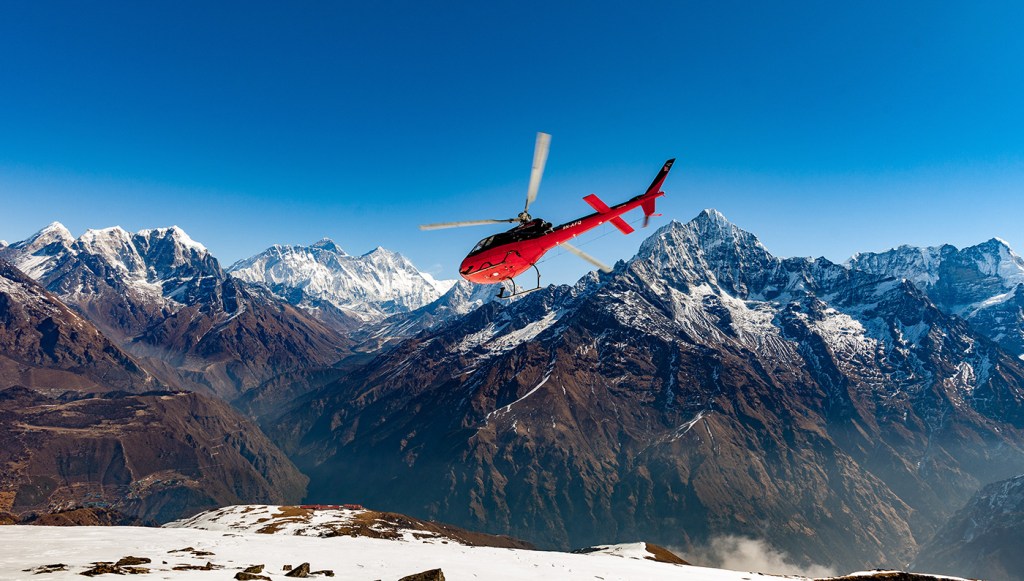 While any trip to the roof of the world is a wonder, Remote Lands’ Himalayas by Helicopter adventure makes for an even more rarified experience. During the 10-day foray, intrepid explorers will be transported by chopper to stand in the shadows of giants, visiting the basecamps below eight of the 10 tallest peaks on the planet—including Mount Everest. But there’s no need to tent it as each night is spent in the sumptuous shelter of a boutique hotel. Guiding the getaway will be Tashi Tenzing, an Everest climber who is also the grandson of Tenzing Norgay—one of the first two people to stand on the coveted summit and return to tell the tale.

Following a day of acclimation upon arrival in Nepal, armchair alpinists will be flown by Eurocopters (seating four to six passengers) to an elevation of 15,100 feet and the bottom of Kangchenjunga (third highest mountain in the world at 28,169 feet). Moving on up to 16,400 feet, guests are greeted with a magnificent view of Makalu (fifth highest at 27,838 feet). The Yeti Mountain Home in Lukla will be the evening’s luxe lodging.

Next, it’s on to 17,400 feet and the legendary launching point for those attempting to climb Everest (king of the mountains at 29,029 feet) and Lhotse (fourth highest at 27,940 feet)—and that’s all before breakfast. The flight plan then veers toward Cho Oyu (sixth highest at 26,864 feet) with time spent in its lowlands at 16,100 feet. Downtime for the rest of the day is spent browsing around Bandipur and an overnight stay at Three Mountain Lodge.

The remainder of the respite will include wildlife gazing in Chitwan National Park (while atop an elephant and by canoe along the Rapti River) and soaking in the sights of Kathmandu before the exclusive expedition comes to fruition. While bookings are available throughout the year, the suggested months are between March through May as well as October and November. Pricing for the Himalayas by Helicopter package is based on two traveling together (with double occupancy rooming) and hovers at $26,664 per person. (remotelands.com)