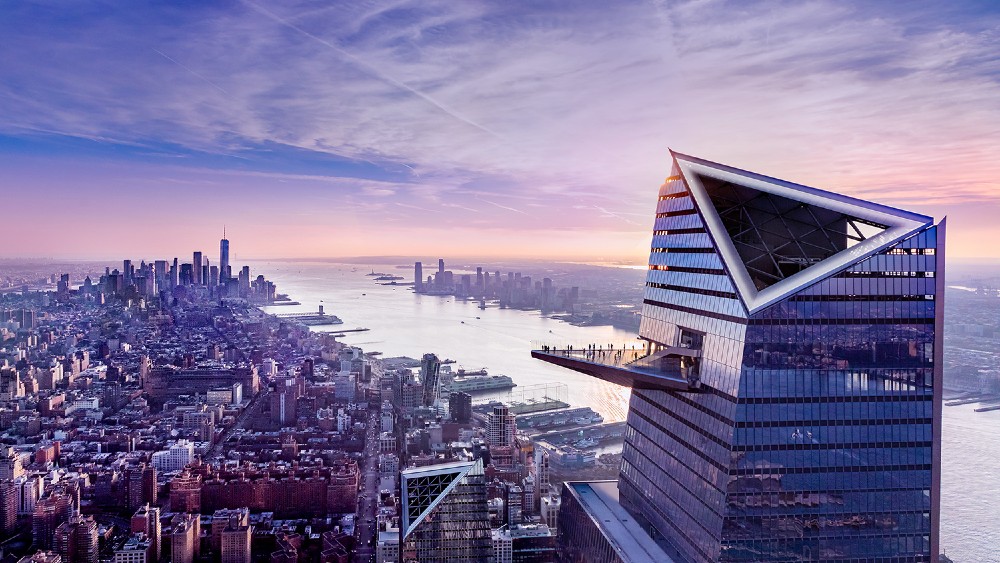 Walking onto the triangular glass-floored section of the Edge, Manhattan’s newest observation deck and the highest outdoor deck in the Western Hemisphere, takes a certain leap of faith. An element of trust. Looking down at your feet—100 stories down, to be precise—you appear to be floating high above New York City’s skyscrapers, minuscule toy-like taxis whizzing below you. It’s a bit dizzying, disorienting, and thrilling all at once.

“KPF has been working on Hudson Yards for about a decade, and we were challenged to put an observation deck onto the building,” says Marianne Kwok, Design Director at KPF, who together with KPF founding Design Principal Bill Pedersen designed the building and the sky deck, which opens on March 11th. “We thought that there was an opportunity, with the way this structure is, to have this unimpeded area where we could put glass. And we thought, that would be kind of great—why not?”

“I think it was a big surprise to everyone that we decided to do something that you can see from the skyline (and) that would be an attractor to the space,” Kwok continues, adding that this approach differs from that of most other observation decks, which are typically more integrated into the building. (For example, the Empire State Building has a terrace that blends into the building’s design.) “We wanted was to do something more dramatic, so we cantilevered the deck off of the building, protruding by about 80 feet.” As a result, the deck juts into a triangular point, providing the ultimate spot for a Titanic “I’m king of the world” moment—and ensuring you’ll want to make a beeline for that spot.

The bleacher-like steps are another unique touch  Courtesy Related Oxford

The sky deck itself weighs 765,000 pounds, hangs 1,131 feet in the air, has 7,5000 square feet of viewing space, and features frameless glass panels angled outward, lending a unique effect to the angular space; the panels are strong enough to lean against, if you’re brave enough to try. Another unique feature is the bleacher-like steps in the back of the deck, which allow for a vast panorama of both the deck itself, and a large chunk of the city, all the way from the tip of Central Park down to the Statue of Liberty and Brooklyn.

Back inside, there’s a bar selling Champagne, cocktails, coffee, and snacks, and a retail shop selling Edge, Hudson Yards, and general NYC swag. To reach Edge, guests enter on the fourth floor of 20 Hudson Yards, then are led (through a somewhat self-congratulatory experience that tells the story of Hudson Yards) to a 52-second elevator ride backed by a video that depicts Manhattan’s skyline growing from sketches to its present-day reality. (Each elevator’s capacity has been lowered from 15 people to 8 due to the current coronavirus epidemic.)

The view east spans most of Manhattan  Courtesy Related Oxford

One level up from the sky deck—accessible by a dramatic staircase or via an elevator directly to the 101st floor—is Peak Restaurant & Bar, which officially opens on March 12th. The latest restaurant by London’s Hospitality Group RHC, which also runs the Sky Garden in London (another among-the-clouds restaurant) and Wild Ink in Hudson Yards, the 110-seat Peak features vast windows and a circular bar to keep the focus on the incredible views; try to snag one of the tables that are literally pushed up against the windows, inviting the skyline to be part of your meal. Rockwell Group designed the sleek interiors and utilized accents that recall the Hudson River and Manhattan, like an angular chandelier that twinkles at night and a custom mural by Malcolm Hill that echoes the Hudson and the city skyline coming together.

Tickets to the Edge are $38 in person ($36 online) for timed entry or $58 ($56 online) for a Flex Pass that can be used any time of day or night; the platform is open until midnight. For the ultimate VIP experience, book the Premium Admission for $92 ($90 online), which includes a Flex Pass, a glass of Champagne, and a personalized photo book. Hot Tip: if you drink or eat at Peak, you’ll be able to step out onto Edge without a separate ticket.