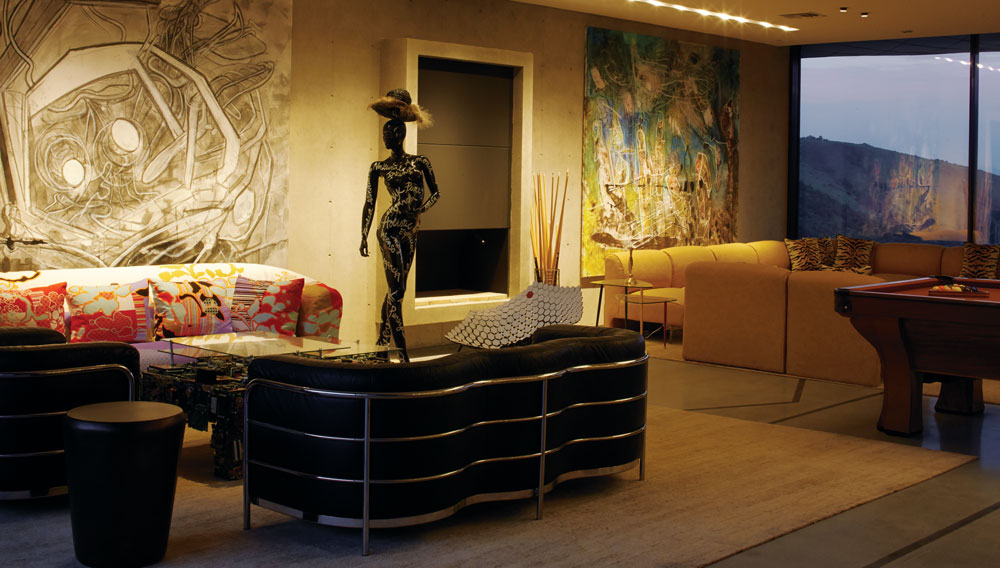 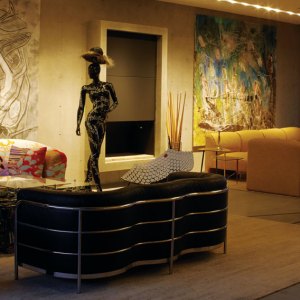 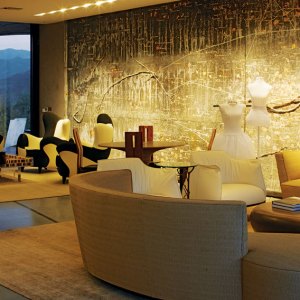 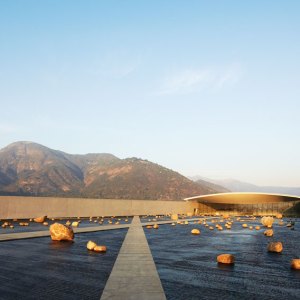 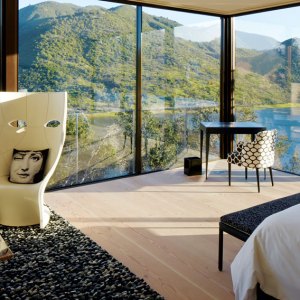 Alexander and Carrie Vik envisioned their first South American project as a vacation home. But during construction of their 4,000-acre ranch in José Ignacio, Uruguay, the globe-trotting financier turned hotelier and his wife realized they wanted to share it with others. Estancia Vik welcomed its first guests in 2009, and its design—artful and detailed, as though it were a private residence—has since informed the look and feel of the other three Vik Resorts properties on the continent.

Viña Vik, the newest of the four, opened in November on a hilltop overlooking grapevines, an azure lake, and verdant valleys. Located south of Chile’s capital, in Millahue Valley, the 22-room hotel pairs with Vik Winery, which was designed by the Chilean architect Smiljan Radic.

For the hotel itself, the Uruguayan architect Marcelo Daglio realized the Viks’ concept of a glass and concrete building with an undulating bronzed titanium roof—a design that recalls Frank Gehry but was inspired by the surrounding mountains and the winds that flow across the property. Avid art collectors, the Viks chose or commissioned all of the retreat’s works and even designed select furnishings, adding personal touches that feel perfectly at home.

“We poured immeasurable work and passion into Viña Vik,” says Carrie, “to develop our concepts and ensure they were implemented in a coherent and aesthetically pleasing manner.” For the Viks, the idea was to create not only a stunning art hotel but also an unparalleled wine experience. Two years of scientific research went into finding land with the ideal terroir for growing the best Carménère, Cabernet Sauvignon, and other grapes. Vik Winery took root only after that painstaking process was complete.

From its hilltop perch, the hotel, which was three years in the making, “affords amazing views and brings the outside in while still preserving complete privacy for our guests,” says Alexander. Longtime admirers of the Italian artist Piero Fornasetti, the Viks named and designed a suite around him. “The furniture was chosen for its architectural nature, which married so well with the other Fornasetti pieces found throughout,” says Carrie. The chair by Fabio Novembre Nemo for Driade was purchased in an auction in Sweden. The desk is from ABC Home, and the American art deco chair, from the first-class dining room of the SS United States, was reupholstered in one of Carrie’s favorite reversible fabrics, Samba Ebony/Ivory by Lee Jofa. The floor-to-ceiling windows are equipped with a Pirouette blind system by Hunter Douglas that features soft vanes floating on a sheer backing. The same window coverings are installed in the other suites, including Retro.

With its calming palette of earth tones, the Chile Suite highlights some of the country’s most celebrated artists, materials, and traditions. “The inspiration for this suite,” says Carrie, “was ancient and historic buildings we have seen throughout the desert of Chile.” The different textural elements at play contribute to the rustic ambience. An oatmeal-hued sisal wall covering, cactus-wood doors, and serape-upholstered ottomans in the bedroom are offset by polished concrete floors and adobe walls in the adjoining bathroom. Above the cactus-wood headboard hang two paintings by Carlos Leppe, while alongside the bed is Felipe Cusicanqui’s painting Mujer en Mimbre (Woman in Wicker), a 21st-century interpretation of traditional arpilleras, or patchwork scenes woven by the country’s peasant women during the Chilean military dictatorship (1973–1990). For the bathroom, the Viks commissioned canoe makers in Uruguay to create the 6-foot-long bathtub and the sinks, all of which are fashioned from thin strips of beechwood held together with resin.

Named for the artist Cristián Abelli, the Abelli Suite highlights one of his colorful abstract works on the wall above the bed. Matching George Nakashima commodes flank the bed, which features a headboard fashioned by Carrie and covered with Varangue acrylic from the French fabric house Manuel Canovas. In the bathroom, the whimsical patchwork effect on the walls is the result of strategically placed multicolored tiles. “The concept for the bathroom was to create a very bohemian space and to have the tiles placed at random throughout to give a very free-spirited feeling, as if you went to the tile junkyard to find leftovers to tile your bathroom,” says Carrie. “In actuality, it was quite difficult to make it look random, and there was ultimately more precision that went into the placement of the tiles to make it look free-form.” The sink and the faucets are by Gessi.

Traditional Portuguese tiles known as azulejos were the driving force behind the design of the aptly named Azulejo Suite. “It took about one year of sending ideas, sketches, and photos back and forth with the artist in Portugal,” says Carrie. Laid across the ceiling in the bedroom and on the walls in the bathroom, the tile work depicts members of the Vik family and their friends sharing a bacchanalian feast in the shadows of the Andes Mountains. “The tiles are based upon a very old Portuguese technique, and this theme of ancient technique was then extrapolated upon throughout the rest of the room,” says Carrie. An 18th-century commode by the Swedish furniture designer Karl-Erik Ekselius sits near one corner of the bedroom, while two ball gowns, both cut from lavish Stafford Rosso velvet by Bart Halpern and designed by Dawn Rickabaugh-Jones, serve as headboards. “The headboards speak to historic formality, particularly in their use of rich velvet,” says Carrie. Two paintings by the Chilean artist Pablo Montealegre also grace the walls.

The Viks personally selected or designed Viña Vik’s every minute detail, and the Graffiti Suite was no exception. For this accommodation, the couple commissioned the Chilean street artist Diego Roa to create a large-scale painting of hands resting delicately on a table alongside glasses of wine. That painting covers an entire wall in the bedroom. Carrie designed the two handmade sheepskin benches that sit at the foot of the bed; they add a touch of bucolic warmth, which counterbalances the sleek desk and brown-leather-upholstered wing chair from Restoration Hardware. “We like eclectic combinations,” says Carrie. The suite’s wooden floors are spectacular—composed of single planks of Dinesen Douglas fir—and in the bathroom, UonUon glazed porcelain tiles produced by 14OraItaliana are patterned like wood planks and swathed in soothing shades of blue and gray. While all of the hotel’s bathrooms incorporate fixtures by Gessi, the spaces are otherwise as distinct as their suites in this unique home away from home.