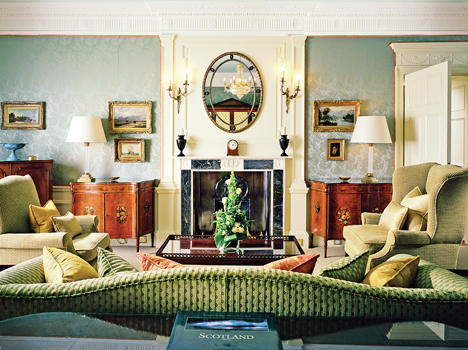 The Harris hawk is a sociable creature, known to pursue and attack its quarry in casts, or teams, in the wild. The bird’s group mentality makes it an ideal companion on the hunt and the species of choice at Gleneagles’ British School of Falconry. Students at the school, which sits across from an equestrian center at this 850-acre resort in Perthshire, Scotland, learn basic handling techniques before free-flying the raptors through the countryside. Although native to North America, the hawks prove effective at flushing game from under the bracken and gorse cover around Gleneagles, where sportsmen of all stripes enjoy equally bountiful surroundings.

Hunters who prefer firearms to falconry can take aim at clay targets—mimicking grouse, teal, partridge, and other small Scottish game—at Gleneagles’ shooting school. Both expert and novice horsemen can polish their skills at the equestrian center, while fly fishermen can pull Nessie-size trout from water hazards on a Jack Nicklaus–designed golf course, one of three 18-hole layouts on the property. Other facilities at the resort include tennis courts, an archery range, and an off-road driving course.

Lording over this estate—and surrounded by ponds, putting greens, and an English garden maze—is Gleneagles’ château-style main lodge. Inside the 1920s-era structure, a Jazz Age–style bar serves single malts from a trolley, a two-Michelin-starred restaurant debunks myths about food in Scotland, a shopping arcade proffers wares from Escada and Alfred Dunhill, and cavernous hallways lead to guest rooms that overlook the grounds.

Gleneagles added a wing of contemporary guest rooms in 2002. The space connects to the lodge through an atrium that houses a new spa and pools for both adults and children. Nearly all of Glen­eagles’ facilities cater to younger guests, with programs such as junior clinics at the golf school and off-road driving lessons in miniature Land Rover replicas. The resort even offers a children’s falconry class in which participants learn to handle Lima and Bond, two of Scotland’s friendliest hawks.