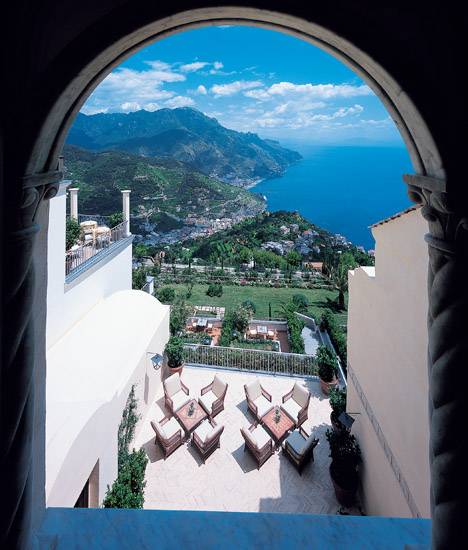 Hotel Caruso dangles from a cliff in Ravello, an Italian village of some 1,000 steps and at least as many lemon trees. The resort’s executive chef, Mimmo Di Raffaele, utilizes the ubiquitous citrus in his desserts—including his delìzia al limóne di Amalfi sponge cake—and a variety of seafood entrées. Like its chef, the Caruso at large avails itself of the surroundings; the infinity-edge swimming pool and several of the guest rooms overlook lemon groves and, more than 1,000 feet below, the Gulf of Salerno.

First opened as a hotel in 1893, the Caruso is built around the excavated remains of an 11th-century patrician’s palace and a colonnade that dates to the 17th century. The hotel’s current state owes to an extensive restoration, completed in 2005, by the Orient-Express group. The company enlisted for the project Italian designer Federico Forquet, whose palazzo-style interiors incorporate frescoed walls and patterned cotto tile floors. Vaulted ceilings, marble pillars, and a bevy of picture windows complete the palatial atmosphere.

At the pool, which borders the excavated colonnade, guests can order pizzas made in a wood-burning oven. But the Caruso’s cuisine reaches its height in Di Raffaele’s kitchen, where you can feast on species unique to the Tyrrhenian Sea—with plenty of Amalfi lemons on the side.