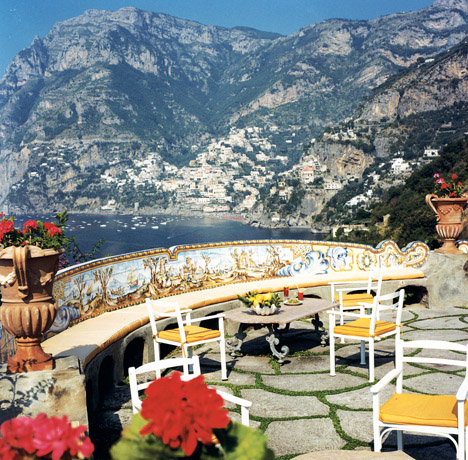 From the twisting road that follows the Amalfi Coast outside of Positano, Italy, you might not notice the entrance to Il San Pietro di Positano. The only indication that you have arrived at the resort is a stone chapel perched on a rocky bluff. Il San Pietro—which is accessed via an elevator that descends through the cliff—sits somewhat improbably below the 17th-century chapel, on a ledge 300 feet above the bay of Positano.

Carlo Cinque, son of a local hotelier, purchased the land below the chapel (which is dedicated to Saint Peter, patron saint of fishermen) in 1962. He built a private villa, carved a garden plot from the cliff, and, over the next eight years, added 33 sea-facing guest rooms, a sunny lobby, and a huge terrace shaded with grape arbors and bougainvillea. When Cinque died in 1984, his relatives took over Il San Pietro, and they continue to operate the now-60-bedroom resort.

The elevator ride from the top of the property takes you to the lobby and the 4,500-square-foot terrace, which overlooks the bay, the Lattari Mountains, and the Faraglioni Rocks of Capri. All of the hotel’s rooms—no two of which are alike—offer similar views from private balconies. Il San Pietro’s beach also affords privacy, as it is accessible only via the hotel’s stairway or elevator.

At night, guests ascend back to the hotel to sip limoncello—Il San Pietro makes its own version of the liqueur from Amalfi Coast lemons—at chef Alois Vanlangenaeker’s Michelin-starred restaurant. Vanlangenaeker also utilizes local ingredients in his cuisine, which may include a Gragnano pasta prepared with Sorrento nuts, a piennolo tomatoes, mozzarella cheese from Campania, and lemons from the hotel’s gardens.