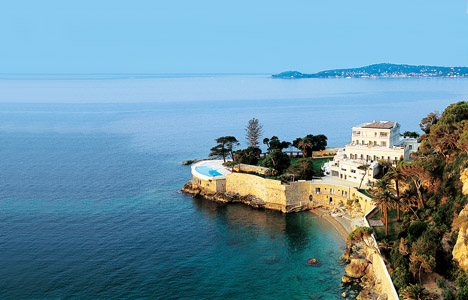 By the time a South African couple purchased Le Cap Estel in 2000, the resort had slipped in rank on the status-conscious Côte d’Azur. Newer and flashier hotels on the stretch of coast between Monaco and Nice had long since lured royalty and celebrities away from Le Cap,which first opened as a resort in 1951. But after a three-year renovation, Le Cap has reemerged as the region’s hottest address—despite its apparent indifference to the French Riviera scene.

Situated at the end of a private peninsula, at the convergence of the Mediterranean and the Maritime Alps, Le Cap consists of only eight guest rooms and 12 suites. The suites are massive—some more than 5,000 square feet—and each features a distinct interior style. The commodious accommodations make you feel at home, as does, in a departure for a French Riviera resort, Le Cap’s service.

A representative from Le Cap contacts you before you arrive to arrange activities and to learn your food and drink preferences. Chef Nicolas Vie will then design a custom menu of mostly Mediterranean selections, which you can enjoy en suite or in one of several private dining areas situated throughout the property. Le Cap’s five-acre grounds also include a hammam, a billiards room, indoor and outdoor pools, and a private beach. For those who wish to work off their meals before taking a swim, the resort offers two personal trainers at its ocean-view fitness facility.