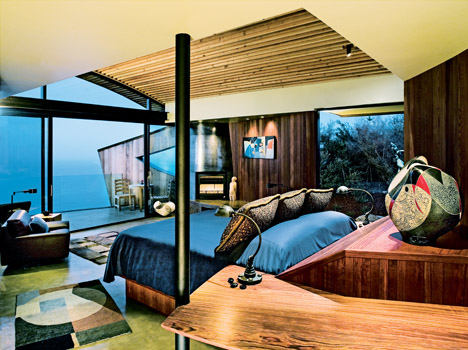 Couples from Chicago, New York, Los Angeles, Paris, and Hong Kong gather around Post Ranch Inn’s resident astronomer, asking questions on a cold night in March. The sky is clear, and the Big Sur, Calif., resort’s 12-inch Mead tracking telescope is focused on Saturn. One woman puts her eye to the scope and jumps back as though a bee had stung her. “I’ve never seen such a thing,” she says of the planet, which resembles a little white plastic sticker of Saturn, rings and all, stuck onto a black chalkboard sky. “We can never see stars in Hong Kong. This is incredible!”

The views on the ground in Big Sur, located an hour’s drive south of Monterey on the winding Pacific Coast Highway, also are worth traveling great distances to see. When you finally arrive at Post Ranch—set on rugged cliffs that drop steeply to cold Pacific surf below—an attendant transfers your luggage to a hybrid Lexus SUV, offers you a seat, and then delivers you to your room at what seems to be the edge of the earth.

Post Ranch opened in 1992 with 30 accommodations scattered along the forested bluff. At that time, 30 was the most rooms allowed by the Monterey County Planning Commission, which, prior to Post Ranch, had not approved a new-construction hotel in Big Sur for two decades. It took Bill and Lucy Post, whose family had owned and worked the 94-acre property as a cattle farm since the 1860s, six years to obtain their original building permit. But at a recent meeting, the MCPC praised the resort for going beyond what the county had required environmentally and aesthetically, and then granted Post Ranch permits for 10 additional rooms.

Though similar to Post Ranch’s existing accommodations (some of which have roofs covered in sod and flowers), the 10 new rooms are larger and more high-tech. Conveniences include push-button-operated drapes and digital music systems. Outside, on cantilevered terraces, hot tubs filled with recycled shower water (also used to heat the bedroom floors) provide private spots from which to gaze at the planets and stars.