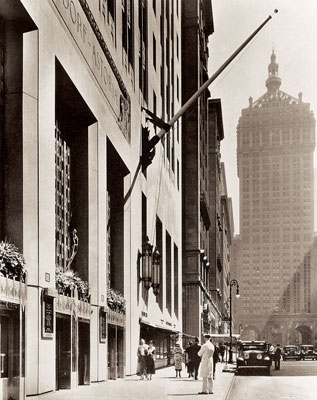 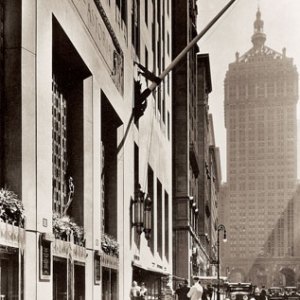 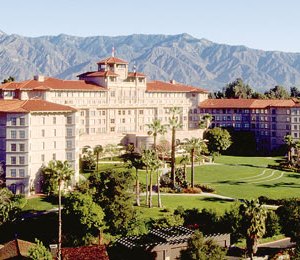 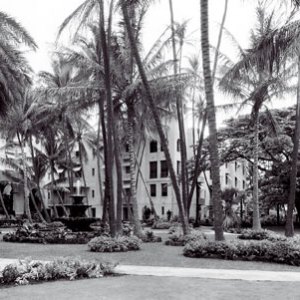 When William Waldorf Astor tore down his Fifth Avenue home to build the Waldorf Hotel in 1891, he was concerned less with becoming a hotelier than he was with overshadowing his aunt, Caroline Astor. William, a novelist, onetime ambassador to Italy, cultivated snob, and renowned eccentric, was vying for head-of-family status with Caroline, who owned the house next door with her son, John Jacob Astor IV. Not to be outdone by his cousin, John (a war veteran known alternately as Colonel Jack or Jack Ass) demolished his and his mother’s home to build the Astoria Hotel.

John designed the Astoria to be five stories taller than William’s Waldorf, which had opened in 1893. But William, who, like his great-grandfather John Jacob Astor, was regarded in his day as the world’s richest man, lost interest in the contest before either property was completed. Declaring his homeland “not a fit place for a gentleman to live,” he moved to England in a protracted yet ultimately successful bid to secure a noble’s title.

Despite their geographic separation and tenuous relationship, William and John formed a partnership and, in 1897, joined their hotels to create the Waldorf-Astoria. The hyphen in the hotel’s name eventually was replaced with an equal sign, a reference to the equivalent quality of the property’s two wings and to the hallway that connected them. The cousins established a fund to finance the closing of the passageway in case animosities between the family’s two branches resurfaced, but the fund was never called into use.

The tale of the Waldorf=Astoria is but one example of the quixotic vision and excessive egos behind America’s golden age of hotels. Dilettante developers and determined mavericks—the Astor cousins, Henry Flagler, Henry Edwards Huntington, Capt. William Matson—reinvented the hospitality business with their grand palaces of the late-19th and early-20th centuries, catering to a burgeoning upper-crust society that had an increasing appetite for entertainment. From 1880 to 1907, the number of millionaires in America multiplied from 100 to 40,000, and they needed places to play. Movie palaces, golf courses, cabaret nightclubs, luxury ocean liners, and extravagant hotels helped satiate their hunger. “We graybeards remember the uproar when in 1912 grandmothers of forty tossed away their crutches and took lessons in the Tango,” F. Scott Fitzgerald wrote in his 1931 essay “Echoes of the Jazz Age.” “There were very few people left at the sober table.”

The Waldorf=Astoria, Flagler’s Breakers in Palm Beach, Matson’s Royal Hawaiian in Waikiki, the Huntington Hotel in Pasadena, and the St. Regis, New York (which John Astor built after completing the Astoria), were among a new breed of hotels that served as gathering places for this spirited society. Before the 1890s, “the best hotels . . . were never thought of as social centers at all,” wrote former Vanity Fair editor and Waldorf=Astoria historian Frank Crowninshield in 1939. “There was never a question of giving fashionable dinner parties in any of them; nor . . . receptions held in them.” The Waldorf=Astoria changed this perception: The hotel’s opening in 1897 was marked by a lavish fund-raiser for a children’s hospital that was organized by Alva Vanderbilt, wife of William K. Vanderbilt. That same year, at a time when the country was in the midst of a depression, Bradley Martin and his wife, Cornelia, spent more than $300,000 transforming the Waldorf into a replica of the Palace of Versailles for a costume ball. The event drew sharp criticism from Protestant leaders and social activists, but it helped launch an era of elaborate functions at the Waldorf and its peers across town and around the country.

After his initial success with the Waldorf=Astoria, John Astor (without the help of William) spent $5.5 million building another high-society hotel, the St. Regis, which opened on Fifth Avenue and 55th Street in 1904. He filled the European-style structure with Louis XVI furniture, crystal chandeliers, 3,000 leather-bound books, and such modern conveniences as telephones and temperature controls in every room. His mother made the St. Regis the headquarters of the original Four Hundred (a rarefied set that stood at the top of New York’s social hierarchy), while John utilized the hotel as his own personal club, frequently hosting friends and relatives in its guest rooms in the years before he perished aboard the Titanicin 1912.

To escape Manhattan’s frigid winters, the Vanderbilts and their ilk began traveling south to Florida for what was dubbed “the season.” Henry Flagler, a partner of John D. Rockefeller in the Standard Oil Co., had extended the Florida East Coast Railway south to Miami and Key West, and in the 1890s, he built the Royal Poinciana Hotel on Lake Worth and the Palm Beach Inn over a barren stretch of sand and swampland. The Palm Beach property, which Flagler renamed the Breakers in 1901, burned down two years later, but he replaced it the following year with an even more elegant rendition, renowned for its beach casino and golf course. Author Henry James acclaimed the new Breakers as “vast and cool and . . . shiny, swabbed and burnished like a royal yacht.” When, in 1925, yet another fire claimed the second Breakers, the heirs of Flagler (who died in 1913) hired Waldorf=Astoria architects Schultze and Weaver to build the fanciful Mediterranean palazzo that remains today.As Flagler had done in South Florida, Southern California’s Henry Edwards Huntington, nephew and protégé of Central Pacific Railroad partner Collis Huntington, turned a sleepy town into a high-profile destination. Huntington, who had wired downtown Los Angeles with electric streetcars, almost single-handedly transformed nearby Pasadena from a ranch settlement into a social and cultural center. He acquired paintings, rare manuscripts, his uncle’s widow (whom he married in 1913), and, eventually, the old Hotel Wentworth, which was located three miles from his 207-acre estate. He reopened the Wentworth as the Huntington Hotel in 1914 and established plans before his death to make his Huntington Library, Art Collections, and Botanical Gardens public institutions. His contributions to the community solidified the perception that Huntington was, according to biographer James Thorpe, “mainly responsible for all the good things that had happened to Southern California.” Flags flew at half-mast throughout Los Angeles when Huntington died in 1927.

That same year, Capt. William Matson, head of the Hawaii-based Matson Navigation Co., opened Waikiki’s first grand hotel—the Royal Hawaiian—and launched a ship, the Malolo, to transport guests to the islands. Matson created his oceanfront Spanish-Moorish resort “to rival and surpass such hotels as the Coronado,” wrote Joan Didion, a frequent guest in the 1960s and ’70s. “The Royal made Honolulu a place to go, made all things ‘Hawaiian’—ukuleles, luaus, coconut-leaf hats and the singing of ‘I Want to Learn to Speak Hawaiian’—a decade’s craze at country-club dances across the United States.”

For many Americans, however, the years following the Royal Hawaiian’s opening were marked not by luaus and sing-alongs, but by the hardships of the Great Depression. The decade-long downturn and, perhaps more significantly, the subsequent World War quelled the nation’s appetite for newer and grander hotels. Still, several of the palaces built in the years prior weathered the 1930s and ’40s, and they remain today among the country’s most luxurious resorts.

While the Waldorf and other properties from its period honor their storied pasts, remaining solvent has required continual reinvention—and significant financial investment. The original Waldorf, once the largest hotel in the world, was razed in 1929, two years before the current hotel on Park Avenue opened. Although the Art Deco–era building’s Gotham-glamorous public spaces are unparalleled in New York, its guest rooms may be considered more homey than luxurious; the hotel is updating the rooms in the coming months. Similarly, the accommodations at the St. Regis were viewed as too dark for modern tastes, and so the hotel is expanding the rooms’ windows. A series of renovations has enabled the Royal Hawaiian to maintain its privileged status despite its countless younger rivals on the islands. The Breakers has spent $225 million since 1990 on restorations and additions, and the Ritz-Carlton, Huntington Hotel & Spa, which is undergoing a $19 million makeover, is more opulent now than it was in its pre-Ritz, early-1900s prime.

In their heyday, the Huntington, Waldorf, and other hotels from this golden era established a new standard for accommodating and entertaining in America, and their influence soon extended across the Atlantic. William Waldorf Astor may have abandoned his native country for Britain so that he could remain a gentleman, but in 1906, the Ritz opened on Piccadilly in London to emulate the hotel he had left behind in New York (and which he had visited only once). Meanwhile, William had purchased and moved into the 17th-century Cliveden House estate overlooking the Thames. It, too, eventually became a hotel.