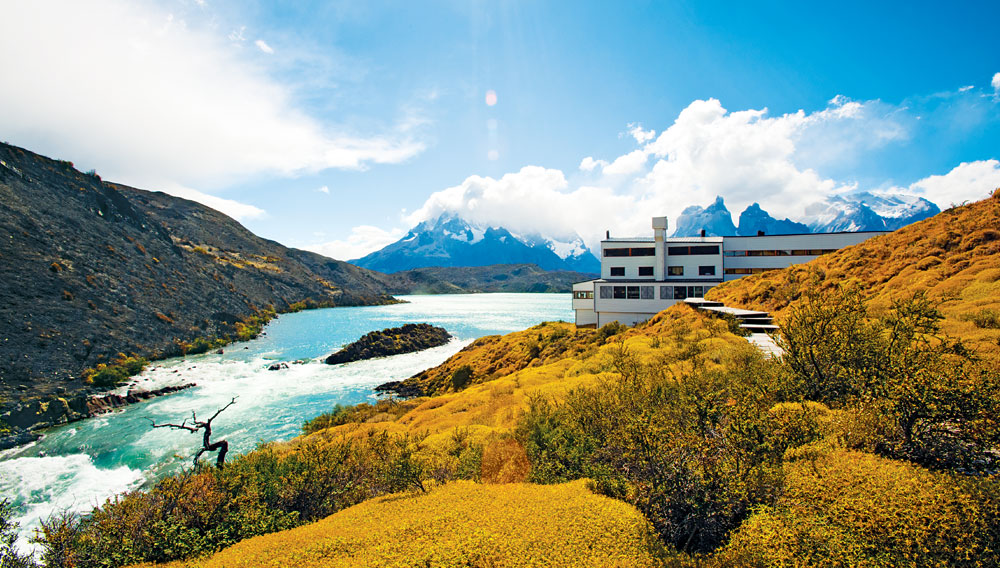 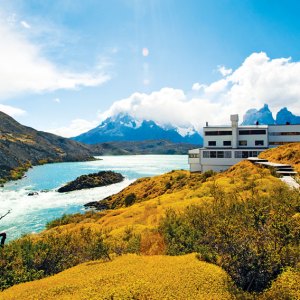 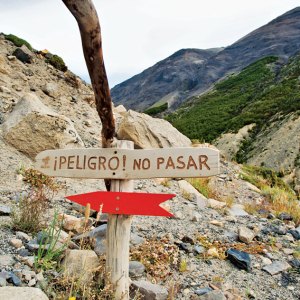 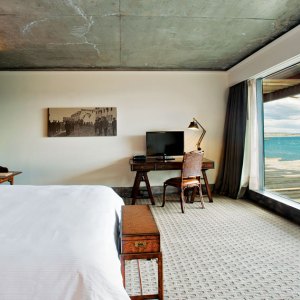 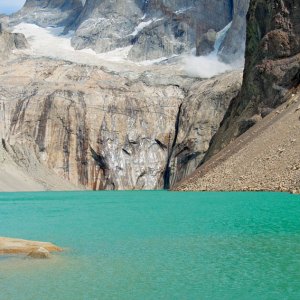 The clank of my spoon against the porcelain mug echoes loudly through Hotel Salto Chico’s empty dining room. It is December in the Southern Hemisphere, the high summer season when this popular Patagonian resort typically sells out. And yet, gazing out the window, I see Salto Chico’s boat still moored to the dock on Lake Pehoé, without a guest or guide anywhere in sight. All is eerily still but for a rushing waterfall and the frantic sway of thorny bushes bending backward in the unforgiving wind.

I take a sip of tea, and my waitress, for lack of anything else to do, tops me off again. In the distance across the lake, the jagged horns of the Cuernos del Paine mountain range jut along the horizon like a scribble, still enshrouded by the early morning gray clouds. Closer by, on the banks of the Salto Chico waterfall, lies the only visible evidence of what has left this popular adventure retreat vacant: The once-lush steppe above the falls—and directly across from the hotel—is now a blackened slope of charred rocks and singed tree stumps.

Just weeks before my visit, a fire ravaged this part of Chilean Patagonia and quite nearly took Hotel Salto Chico with it. Allegedly started by an Israeli camper who failed to extinguish a small (and illegal) bonfire adequately, the blaze continued for weeks, ultimately claiming about 6 percent of the 935-square-mile Torres del Paine National Park in which the lodge is located.

“The last month was a nightmare for us,” says Jesús Parrilla, CEO of Explora, the Santiago-based owner and operator of Hotel Salto Chico and adventure resorts in Chile’s Atacama Desert and on Easter Island. Parrilla has met me at Salto Chico during his inspection of the shuttered property, which has been completely scrubbed down during a process that involved replacing linens and mattresses; washing blackened wooden walls, floors, and ceilings; and expelling the heavy scent of smoke that permeated most of the lodge. “For nearly two weeks, the building was under constant threat of the flames,” he explains. “But we were very lucky.”

Luck actually had little to do with Salto Chico’s survival. Rather, a devoted staff that stayed to battle the flames long after the hotel’s evacuation was the saving grace. But even though Salto Chico emerged relatively unscathed, the tragedy weighs heavily on the Explora family. “We are anxious to reopen, but at the moment, there has to be a mourning period,” says Parrilla. “You have to understand how emotional this has been for everybody. For our guides, especially, this is their home and their backyard, so they are understandably in a bit of shock.”

Hotel Salto Chico, which reopened postfire in February, indeed has deep roots in Torres del Paine. Originally opened in 1993, the upscale retreat was the first of its kind in the region, where rustic lodges and wind-battered tent camps were the only other accommodation options at the time. “When we started [building the lodge], people thought we were crazy,” Parrilla says. “People didn’t think the kind of person who comes to a vacation resort would want to be outdoors, trekking and horseback riding all day. But we recognized that some travelers want a more meaningful experience than just lying by a pool.”

Nearly two decades after its opening, Hotel Salto Chico is regarded as one of the world’s preeminent adventure properties, known for its Scandinavian-style contemporary design, its incomparable adventures in the national park, and its magical setting on the shores of Lake Pehoé and in the shadow of the sculptural Cuernos del Paine mountains. And while it remains the only luxury lodge within Torres del Paine—thanks to a contract Explora signed with the park in the late 1980s, when the region was a relative unknown in the world of tourism—Salto Chico finally has some company in Chilean Patagonia.

Opened within a few weeks of each other last December—the same month as the wildfire—the Tierra Patagonia Hotel & Spa and the Singular Patagonia are the first new luxury offerings in the area since Salto Chico. Tierra Patagonia is a striking contemporary structure (also loosely Scandinavian in style) set just outside the entrance to Torres del Paine. Carved into a gentle slope along Lake Sarmiento, the resort looks out to the Paine Massif and the sprawling golden steppe.

Less than 90 minutes south of the entrance to Torres del Paine, and just outside the town of Puerto Natales, the Singular Patagonia is set in a former sheep-processing factory that underwent a decade-long transformation to become a 57-room resort. Brick, glass, and corrugated steel anchor an austere ambience that allows the surroundings—in this case the shores of Last Hope Sound—to take center stage.

Patagonia’s scenic environs, of course, are the primary motive for any trip to the region. Until the 1950s, when the first aerial surveys of Patagonia were taken, thorough knowledge of the area was scant. By the late 1970s, with the publication of British author Bruce Chatwin’s travelogue In Patagonia, the region began to generate more interest among adventurists. Chatwin described Patagonia as “the point beyond which one could not go,” reserved for “the outlaw, the exile, and the wanderer.”

Escaping the modern world remains core to Patagonia’s allure. Distances are seemingly unending in the region, which spans some 400,000 square miles (roughly one-quarter of which is in Chile; the remainder is in Argentina). The local population is so scattered—averaging about one person per square mile—that sightings of guanacos and Pat­agonian foxes far outnumber the occasional glimpses of gauchos on horseback.

To arrive in Chilean Patagonia, travelers from the United States must endure 24-hour-plus journeys. Still, tourism in the region is on a slow but steady rise. In 2011 Torres del Paine National Park welcomed 145,000 visitors, roughly 35 percent more than it did in 2005 and more than three times as many as in 1995. Studies suggest that tourism in the park will continue to grow by roughly 10 percent each year.

Torres del Paine’s main attraction for adventurers is the trio of iconic towers (torres) of the Torres del Paine range. Set behind the Cuernos del Paine mountains, the peaks are accessible only via a grueling 10-hour trek to their base. Salto Chico, Tierra Patagonia, and the Singular Patagonia all offer excursions to the torres, as well as activities such as kayaking through icy fjords, horseback riding with gauchos (each lodge has its own estancia), and boating to glowing blue glaciers.

Following the fire, Hotel Salto Chico overhauled its excursion offerings, adding 11 new outings in undamaged locales while removing affected areas from the list to enable undisturbed recovery. During my stay at Tierra Patagonia, we forgo our hike to Grey Glacier and instead take a boat tour that avoids the burned lands surrounding the ice field. In the end, my fellow adventurers agree that standing on the bow of the boat at arm’s length from the 104-square-mile glacier while sipping pisco sours on the rocks (using glacier ice, naturally) is preferable to hiking anyway.

Still, the long hike to the torres is the reason I have traveled from New York City to the ends of the Earth. On the last day of my trip, I wake at Tierra Patagonia to a perfectly framed view of the Paine Massif range, ready for the adventure ahead.

Less than an hour into the hike, our group of 12 naturally divides itself, with the warriors forging ahead at lightning speed and the less intrepid trailing behind. We navigate through forest and steppes, crossing glacial lakes via narrow bridges and traversing steep hills and narrow valleys. When we reach the base of the rocky mountain that stands in front of the iconic range, we realize the all-or-nothing nature of our quest: Only those who make it all the way to the end will actually get to see the three torres.

Venturing on, I pick my way through large granite stones and loose gravel, slipping a half-dozen times and either barely righting myself or landing with a hard thud on my backside. The higher we rise, the stronger the wind whips at us in unpredictable bursts, threatening to knock us off the side of the mountain. As we slow down, gradually losing the long battle with fatigue, we form a bottleneck of sorts, ascending the final stretch of the winding pathway in a nervous conga line.

The payoff at the top is beyond expectations. The photos I have been obsessively poring over for weeks have been a mere tease; the reality is an electrifying turquoise lake that shimmers far brighter and three chalk-white towers that loom larger than any camera can convey. In spite of myself, I click my shutter uncontrollably.

Still anxious to feel as isolated as the exiles and wanderers, I push my aching legs farther than the rest of the group, hopping from rock to rock until I reach the base of the lake. Here, hidden from the others by the massive boulders behind me, it is easy to envision myself in the last empty corner of the world. For one transcendental moment, I relish in the realization that I have reached, in Chatwin’s words, the point beyond which one cannot go. Then, remembering the long trek home, I fix my thoughts instead on the deep-tissue massage that lies ahead.

A windswept paradise at the ends of the Earth, Chilean Patagonia is home to some 100,000 square miles of jaw-dropping fjords, glaciers, plateaus, and peaks—and three implausibly upscale lodges that immerse guests in the stellar surroundings.

A Patagonia standard-bearer, the 49-room Hotel Salto Chico (866.750.6699, www.explora.com) sits on the banks of Lake Pehoé in Torres del Paine National Park. Opened in 1993, the Explora-managed property was the first luxury resort in the region and remains the only one within the park’s boundaries. The hotel was designed to resemble a ship, with curvy, blonde-wood paneling and circular windows. Dramatic vistas—plus a restaurant, bar, and small spa—keep guests content on-site, but the extensive roster of glacier walks, treks, horseback rides, and other nearby excursions is what sets Salto Chico apart from any other resort. Four-night packages from $2,780 to $4,240 per person, all-inclusive

Located just outside the entrance to the national park, the new 40-room Tierra Patagonia Hotel & Spa (800.829.5325, www.tierrapatagonia.com) looks out to the Paine Massif range from a gentle slope along Lake Sarmiento. The property, which opened in December, embraces its setting, affording views through massive windows in cathedral-like public areas and via peekaboo panes adjacent to soaking tubs in the guest rooms. Its spa is likely the region’s best such facility, with an indoor pool, an outdoor hot tub, a sauna and steam room, and treatments that focus on relieving sore muscles after long hikes. From $2,460 per person for four nights, all-inclusive

The Singular Patagonia (+562.954.0480, www.thesingular.com) is the result of a painstaking, decade-long transformation of a former sheep-processing plant. Situated roughly 90 minutes south of Torres del Paine National Park, just outside the town of Puerto Natales, the property opened as a 57-room resort in December. Spacious guest rooms feature floor-to-ceiling windows overlooking Last Hope Sound, where the resort’s two powerboats embark on trips to neighboring glaciers and fjords. The Singular Patagonia also offers a range of boating, biking, hiking, and other excursions into Torres del Paine. A two-level restaurant serves local fare including guanaco, while an on-site museum honors the property’s former life as a factory. From $680 per night based on double occupancy, all-inclusive