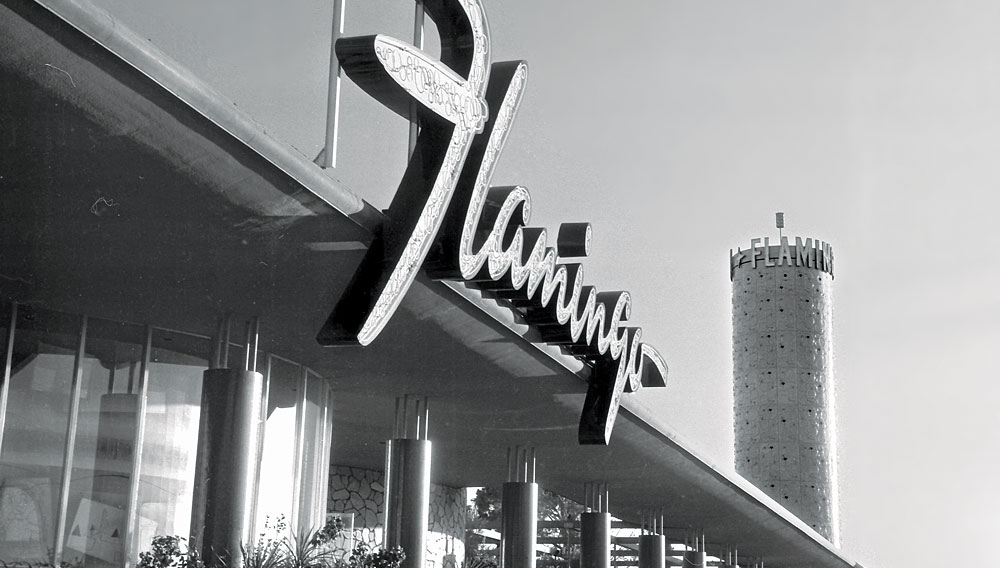 Despite its errant image, the desert resort town to which we enthusiastically retreat to indulge our ids is today a bastion of innocence in comparison with its rather sinister past. Las Vegas, after all, has a cadre of founding fathers whose blood sports ably abetted its reputation as Sin City.

When the 1909 act outlawing gambling in Nevada was repealed in 1931, the lawless made their way there in droves to exploit the newly legalized pastime of the city’s citizenry, which had swelled from a few thousand to 25,000 people after Herbert Hoover signed the appropriation bill for the construction of a dam that would eventually bear his own name. Guy McAfee was one of the more accomplished of these criminal pioneers, having managed lucrative speakeasies, brothels, and gambling dens while heading the Los Angeles Police Department’s vice squad. When the winds of reform swept clean city hall, McAfee wisely relocated to Las Vegas, where he could ply his trade with impunity. Although in 1946 he would open the Golden Nugget, then billed as the world’s largest casino, his first venture was the 91 Club, named for the desolate tract of highway that McAfee famously dubbed “the Strip” in homage to his former haunt, the storied stretch of Sunset Boulevard in Hollywood.

McAfee was something of a maverick. Sin central at that time was located downtown on Fremont Street, otherwise known as Glitter Gulch, where another pillar of the community, Lester “Benny” Binion, established the Horseshoe Club. With his Western shirts and oversize Stetsons, Binion had the appearance of a matinee cowboy; however, many a lawman would gladly have replaced his bolo ties with a hangman’s noose. The same year that gaming returned to Nevada, the bootlegger and racketeer was convicted in Dallas of murdering a rumrunner. Though this was by no means his first or last homicide, he received only a two-year suspended sentence for the deed. When the Chicago mob successfully ousted the politicos with whom he had curried favor, Binion, like McAfee, sought a safe haven. His contributions to casino culture included helping to launch the World Series of Poker, instituting no-limit betting, and—most importantly—initiating the practice of serving complimentary drinks to all gamers.

The typically Western trappings of the Horseshoe and Golden Nugget gave way to greater sophistication with the advent of the National Crime Syndicate, as represented by its chairman of the board, Meyer Lansky. The sleek Flamingo hotel and casino (pictured) was an urbane oasis designed to reflect the more polished style of the casinos Lansky knew in Havana. Despite the resort’s popular association with the chairman’s lieutenant, Benjamin “Bugsy” Siegel, whose wasteful and capricious spending bloated the construction budget to a staggering $6 million, Lansky is credited as being the visionary. The latter wanted, he said, “to build the greatest, most luxurious hotel casino in the world and invite people from all over America—maybe the high rollers from all over the world—to come and spend their money there.”

With this glamour came the Syndicate’s eventual control of every major casino on the Strip. Interestingly—Lansky’s dream notwithstanding—few of the resorts over which the Syndicate reigned were actually conceived by the mob. The Flamingo was the brainchild of W.R. Wilkerson, founder of the Hollywood Reporter; only when his financing floundered did Siegel, at Lansky’s bidding, come to the rescue, muscling out the publisher. Wilbur Clark, the entrepreneur behind the Desert Inn, also fell short of funds and sold controlling interest in his hotel to Cleveland mob boss Moe Dalitz. Even Mafia-made properties were not immune to takeover. Tony “The Hat” Cornero took a substantial loan from Dalitz in 1955 to complete the Stardust. Under pressure to repay the $1.25 million, Cornero suffered a fatal heart attack while down more than $37,000 in a game of craps. At the time, he had less than $1,000 in his bank account. Dalitz promptly claimed the Stardust as his prize.

Dalitz himself was supplanted in 1967 by a different breed of boss. When he attempted to evict Howard Hughes from the high-roller suites he occupied at the Desert Inn, the reclusive billionaire made him an offer he couldn’t refuse: Dalitz sold him the hotel for $6.2 million in cash and $7 million in loans. Hughes, determined to clean up the Strip, went on a $65 million spending spree, buying up five more casinos, and paving the way for a kinder, gentler Vegas, whose present sins are venal rather than deadly.