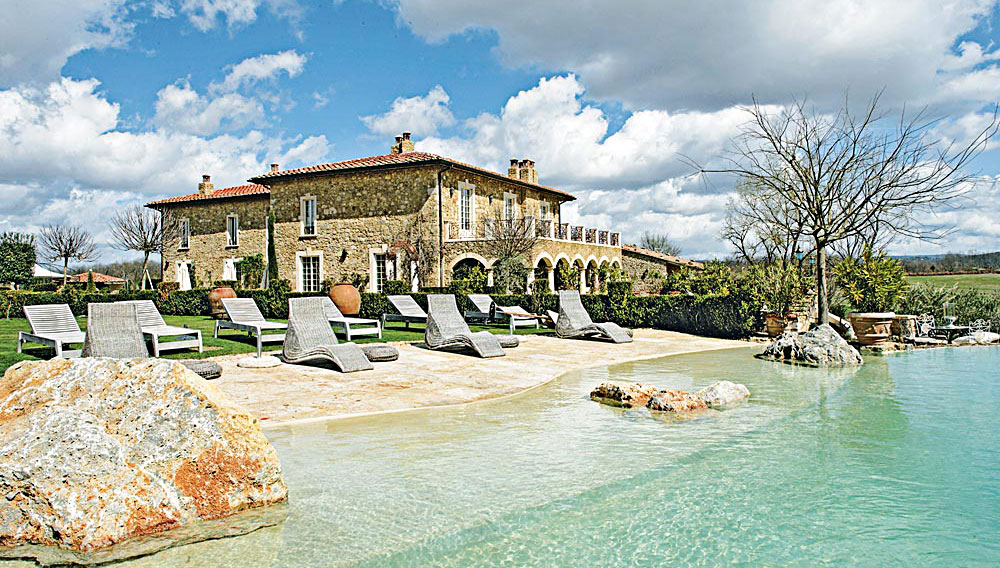 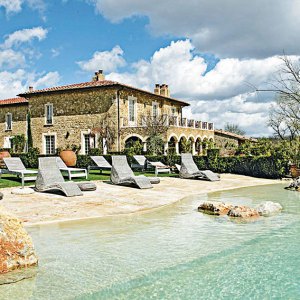 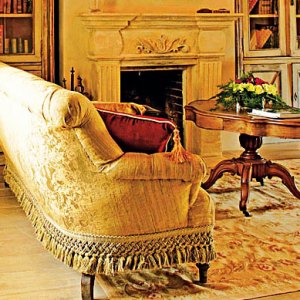 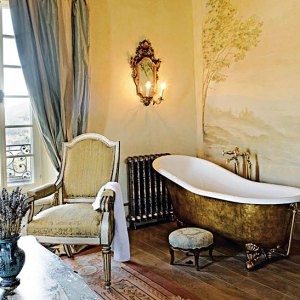 What » The ultimate villa-rental experience in Tuscany.

Who » Claus and Jeanette Thottrup, the Danish owners of Borgo Santo Pietroin southwestern Tuscany, moved in 2001 from their adopted home in London to Italy. While living part-time in Italy’s northern mountains, the couple discovered the 13-acre Borgo Santo Pietro estate in a remote valley, about 30 minutes from Siena by car. The property’s 13th-century main house was covered with 30 years’ worth of pigeon droppings, but the Thottrups were undeterred. “[We wanted] to bring Borgo Santo Pietro back to life,” says Jeanette.

Claus, a developer who has built some of central London’s finest homes, hired specialists from Denmark, Germany, Australia, and England to resuscitate the estate’s ancient buildings. To fill their new home, the couple acquired repatriated Italian antiques from overseas, stone from an Italian castle, and furnishings from French antiques markets. “When the villa was finished,” says Jeanette, “we spent another year and a half with our artist friends creating murals and hand-painting the floors.”

After restoring their estate over a period of five years, the Thottrups decided they did not want to live full-time in a rural location. “We determined it would be a retreat,” says Jeanette. “We modeled the lifestyle on that of an old English manor house, not that of a hotel.”

Today, the Thottrups operate Borgo Santo Pietro as a seven-room villa retreat that can be rented by a single group. The estate serves as a scenic base for exploring Tuscany, where the Thottrups’ many connections can open doors—to cellars, museums, and more.

Among the activities that the Thottrups and their staff can arrange are hot-air balloon rides over the countryside and day trips to San Galgano, the site of the region’s oldest Cistercian abbey, where the cross-shaped sword that allegedly inspired the story of King Arthur is stuck inside a stone. Art-themed excursions to Florence might include a rare visit to the Vasari Corridor, a hidden passageway that connects the Pitti Palace and the Uffizi Gallery. The half-mile-long space was built for a royal wedding in 1564 and houses more than 1,000 paintings.

Borgo Santo Pietro guests also have special access to another off-limits location: Florence’s city center. “The city of Florence allows only residents to drive within city limits,” explains Jeanette. “But Borgo has a private arrangement and can therefore drive guests directly to and from the center.”

No exploration of Tuscany would be complete without immersion in the region’s food and wine. “We can arrange wine tours pretty much everywhere, including Biondi Santi in Brunello, Castello di Cacchiano in Chianti, and Casanova di Neri in Montalcino,” says Jeanette. “Our guests have access to one-on-one audiences with vintners and exclusive samplings of rare wines.” Borgo Santo Pietro also offers private cooking classes with the property’s chef, Thomas Brieghel, who teaches guests how to prepare dishes using ingredients produced on the estate’s working farm and gardens.

Interspersed among the gardens are tennis courts, a trampoline, hammocks, daybeds, a children’s playground, and an infinity pool. The Thottrups are also working on what Jeanette calls “the lake project,” which, upon its completion, will be a park with a lake for swimming.

After days spent exploring the grounds and the Tuscan surroundings, guests can retire to Santo Pietro, the largest of the villa’s suites, where gilded double doors separate the bedroom from the dining and drawing rooms. “The name Santo Pietro can be translated as ‘holy rock,’” says Jeanette, “which is fitting, because we consider the suite to be the cornerstone of Borgo Santo Pietro.”

The Exclusive » “Our truffle hunter is widely regarded as one of the most experienced in Tuscany,” says Jeanette of Sandro Bilotti. “He is 58 years old and has spent much of his professional life collecting truffles and mushrooms.” Borgo Santo Pietro can arrange private hunts with Bilotti, who rarely takes people into the fields. “He is an incredible guide who knows the hills and woodlands of this area intimately,” says Jeanette.

Price » Approximately $110,000 for exclusive use of the property for two weeks; activities not included.