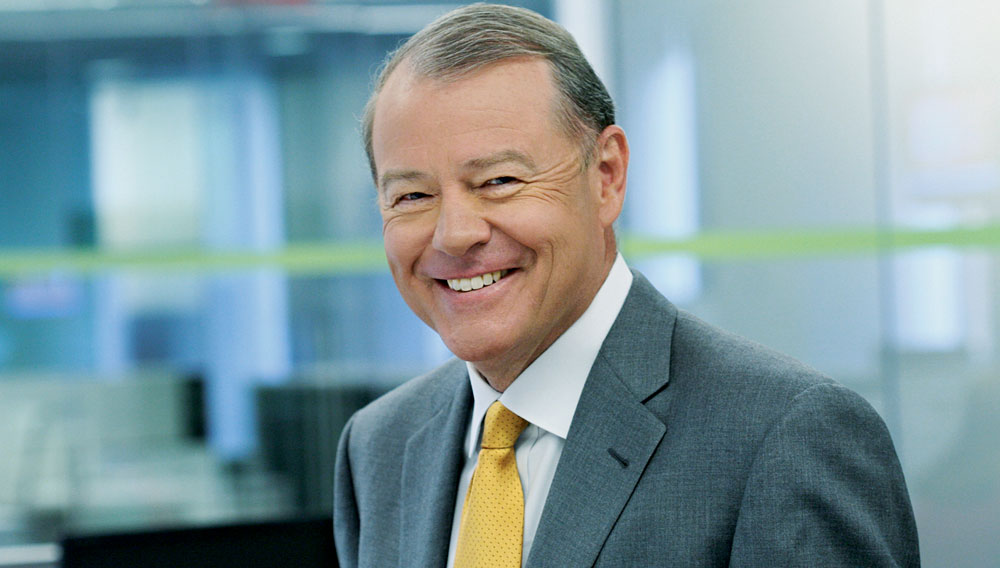 Stuart Varney’s love affair with America started with a simple visit as a young man. “I really wanted to see America because that was the last big place I hadn’t been to,” recalls the 63-year-old British expatriate and world traveler, who is best known as the host of Fox Business Network’s Varney & Co. “And I liked it right off the bat. There’s a big horizon in America. I grabbed hold of it and ran.” Some 40 years later, Varney and his American wife, Debra—who have six children and six grandchildren—own property throughout the country. His most prized plot is a farm with a log cabin in New York’s Catskill Mountains, where he harvests woods for custom-furniture makers. When not offering political and economic insight on his morning TV show, Varney can often be found on the farm riding a John Deere tractor with his Lassie-look-alike collie at his side—a scene, British accent notwithstanding, that is as American as it gets. —Bailey S. Barnard

Tell us about your farm in the Catskills.

We built it from scratch in 2003. I was involved with the design and build of the structure, and my wife handled the interior design. Up there, I’ve got a gigantic American flag. Every Fourth of July, we winch it up the side of the house on pulleys so it covers the entire house, or at least the front and side of it—which is ironic, is it not, for an Englishman to be flying a gigantic American flag?

What types of woods do you harvest there?

We have a lot of black cherry, which is kind of the Amer­ican mahogany. It’s used for very high-end furniture. We also have a lot of hard maple, which is used for basketball courts, and some red oak, which again is a furniture-type material. We have over a thousand acres up there, and on my [John Deere] Gator I can drive through the woods, up and down the meadows, and into the canyons and creeks. On a Gator you can get anywhere you like, and there’s cargo space in the back that I use when I’m logging.

And you have property elsewhere.

I’ve got single-family homes in California and in Naples and Orlando, Florida. Our primary home is in Bergen County, New Jersey. We’ve also got a family farm in New Zealand and a very nice house in Adelaide, Australia, which is near the wine country where my son works. When I travel now, I’m far more interested in Australia and New Zealand, and that’s not just because I’ve got family there. I’m especially intrigued by Western Australia, which is a gigantic area rich with natural resources and totally empty of people. I think of it as one of the last frontiers anywhere. I’m intrigued by wide-open spaces, an absence of people, and a sort of get-up-and-go frontier mentality.

Where else have your travels taken you?

Before I went to college I did the British equivalent of the Peace Corps, so, at the tender age of 18, off I went to East Africa. And then after college I literally sold everything I owned and hitchhiked around the world for a number of years. I went through Europe and headed through Turkey, Iran, Afghanistan, Pakistan, India, up to Nepal, Sri Lanka, over to Thailand, Malaysia, Singapore, and then down into Indonesia, Australia, and New Zealand. I’ve also been to 49 states—and there’s not one that I don’t like.

What are your favorites places in America?

I love New York City. I work in the middle of it, and I truly love it. Arizona in March is a terrific place. So is Santa Fe [N.M.] in February. I like Lake Tahoe [Calif.] for heaven’s sake, but not so much in January. It’s funny, but I love Las Vegas—even though I don’t gamble, and I don’t drink, and I tend to get to bed early. I’m the guy who gets up at 4 in the morning and emerges in the casino just as everyone is leaving. I think Las Vegas is a priceless piece of Americana.