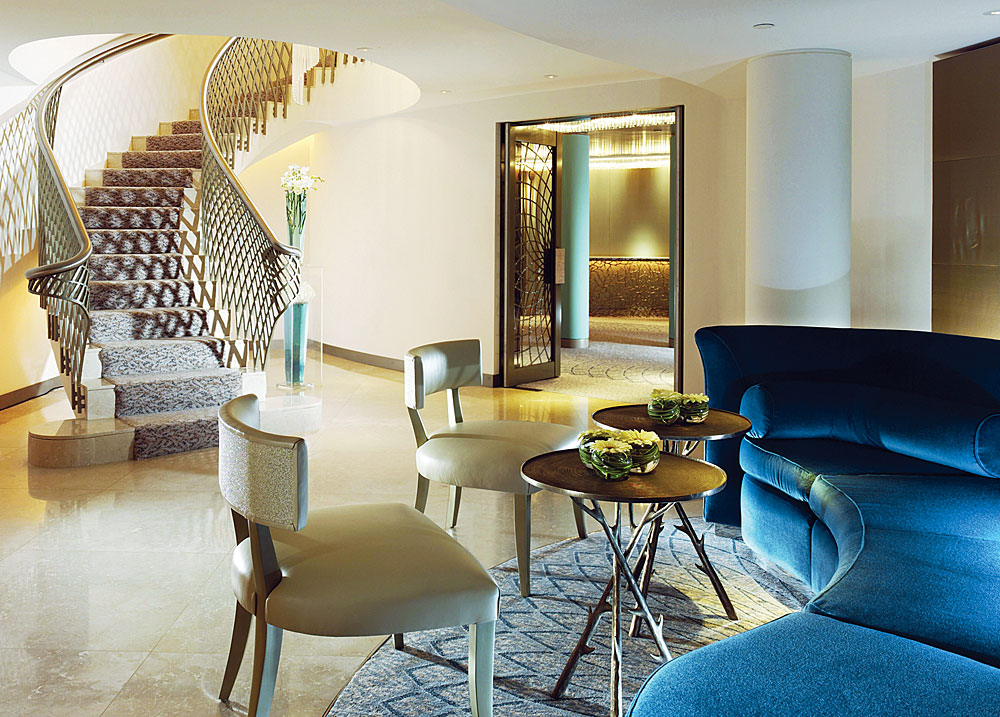 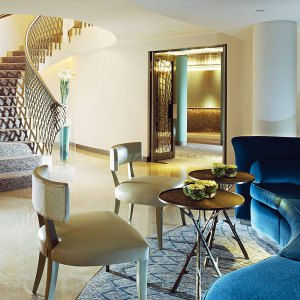 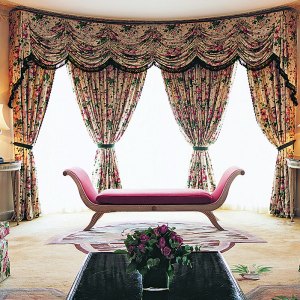 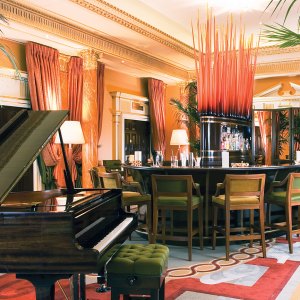 It may be a stretch to suggest that the course of World War II changed in spring 1944 when General Eisenhower, unhappy with the decor at Claridge’s, checked out of the hotel and took a 10-minute stroll through the streets of the Mayfair district to the Dorchester. But at his new lodging, in what is now one of the Belgravia Suites, the Allied supreme commander met with Winston Churchill to plan for the Normandy invasion. To preserve Eisenhower’s privacy, Churchill ordered the construction of a wall on the suite’s balcony, a feature that remains intact after the Dorchester completed an $81 million renovation in time for the hotel’s 75th anniversary last year.

The heart of the Dorchester, the Promenade, also remains, but with an updated configuration and appearance conceived by New York–based designer Thierry Despont. The light-filled space, which runs for 165 feet on the ground floor, is lined with new lounges and restaurants, where Londoners sip cocktails under ceilings supported by marble columns crowned with gilded Corinthian capitals.

Ornate details also abound in the Dorchester’s suites. Theater designer Oliver Messel adapted the original interiors for the Royal Penthouse, located on parts of the eighth and ninth floors, from the stage set of his ballet Sleeping Beauty, which opened at Covent Garden in 1946. Door handles in the recently restored suite resemble birds resting on branches, while mirrored walls lined with glistening flowers in the dining room create the effect of eating in an enchanted forest.

The suite where Eisenhower schemed with Churchill has a more masculine ambience, with wood paneling in the bedroom and war memorabilia hanging in the hallways. While it may no longer serve as a place to plan battles, the suite’s terrace, which affords both privacy and views of Hyde Park, is the perfect staging area, with cocktail in hand, for launching a conquest of London.

On Park Lane, across from Hyde Park in London’s Mayfair district.

Each of the 195 guest rooms, 50 suites, and four roof-garden suites is distinct in design.

Lounging in the spa’s sitting area, which is dominated by an Art Deco fountain spouting water from bronze water lilies, qualifies as a treatment in and of itself. The hotel’s function rooms include a ballroom that is paneled in black Spanish glass and can accommodate as many as 800 guests.

The Grill for British food, China Tang for Cantonese fare, and the Krug Room for private dining and Champagne tastings. This fall, French chef Alain Ducasse opens Ducasse at the Dorchester, a 70-seat restaurant situated just off the Promenade.

A guided shopping trip to fashion boutiques, arts and antiques shops, perfumeries, and other holders of the Royal Warrant (which is awarded to establishments that supply royal households) on nearby Bond Street.