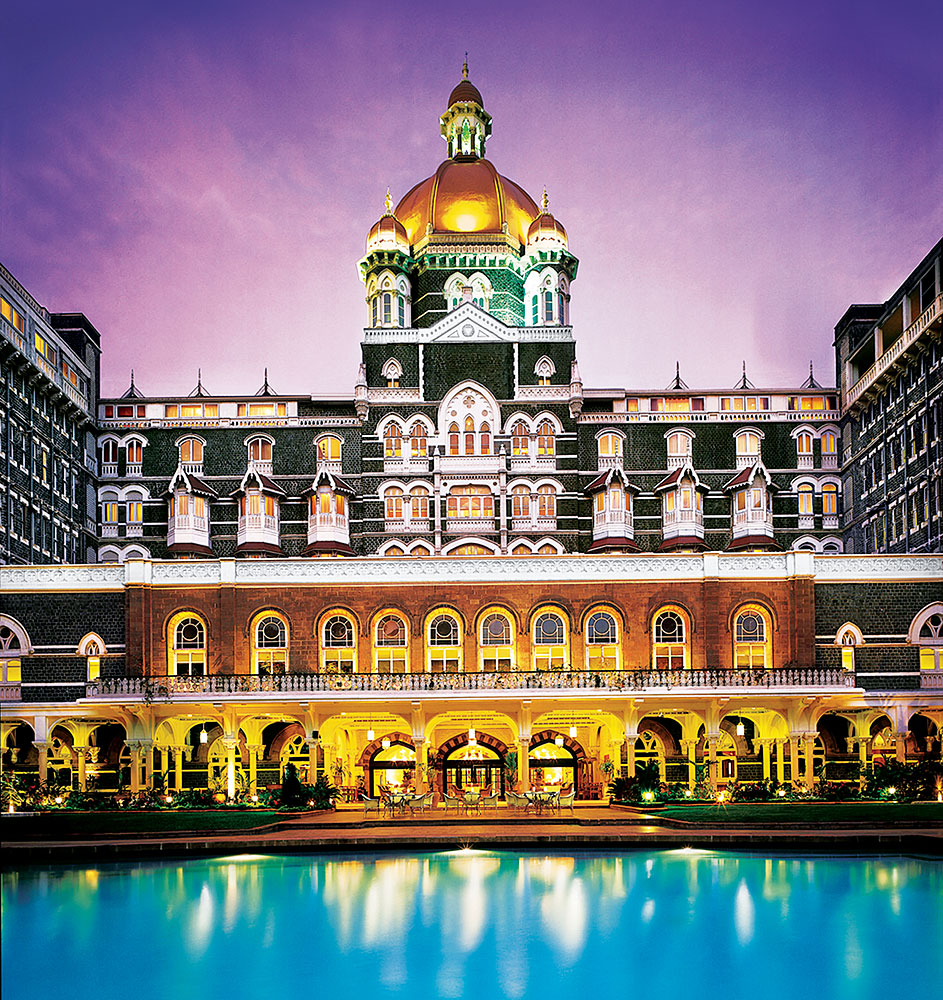 Once while visiting Bombay, George Bernard Shaw was asked if he wanted to travel to Agra to see the Taj Mahal. “I have no desire to see it,” the writer replied, “as the Taj Mahal where I am staying is good enough for me.” Shaw was referring to the Taj Mahal Palace & Tower, which today is the flagship of the international Taj hotel chain.

Built in 1903, the Taj was the brainchild of Indian steel magnate Jamsetji N. Tata, who believed that a grand hotel would help establish Bombay, now known as Mumbai, as one of the world’s great cities. Early guests at the property included maharajas and princes from Indian states, as well as Shaw and his literary peers from the British Isles. When English author Aldous Huxley arrived at the hotel, he remarked that it combined “the style of the South Kensington Museum with an Indian pavilion at an international exhibition.”

Indeed, with soaring domes, cupolas, vaulted ceilings, and other divergent features, the Taj’s architecture displays a vast range of influences: Moorish, Italian Renaissance, Asian, and Rajput. The property also houses an art collection—the most comprehensive collection of any hotel in India—that includes 16th-century Goan Christian artifacts and Bastar tribal pieces from the 15th century. Furnishings include crystal chandeliers and other period pieces that the Taj acquired from prominent local families in the 1960s, when several of the mansions in Bombay were demolished to make way for high-rise apartment buildings.

In 2003, the colonial-era wing of the Taj Mahal Palace & Tower underwent an extensive renovation. The city’s most significant colonial monument, the Gateway of India, is visible from several of the wing’s guest rooms, as are the multicolored fishing and sailing boats on the nearby Arabian Sea. Regardless of the angle, as Shaw no doubt would attest, the Taj affords a captivating view.

On the Arabian Sea in the heart of Mumbai’s tourist district.

The traditionally appointed Palace and more contemporary Tower, which are connected by a corridor of shops and restaurants, contain 519 guest rooms and 46 suites. Rooms overlook the city, the swimming pool, the Gateway of India, or the Arabian Sea. Personalized butler service is available on request.

A swimming pool, a health club and spa, a yoga and Ayurveda center, a business center with meeting rooms, and 11 banquet halls.

Seven restaurants offer a range of cuisine, from Indian and Mexican to Japanese and Thai.

Reserve the hotel’s yacht and take a day trip to Elephanta Island, where India’s famous temple caves were carved out of rock between the fifth and eighth centuries.