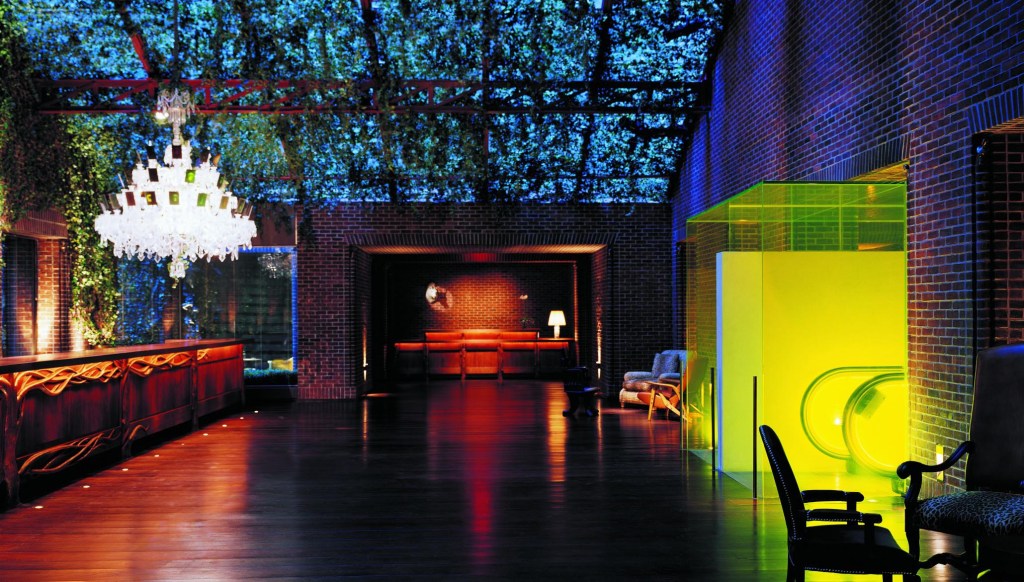 Each with a storied past and a unique design approach, these five hotels aim to impress. From a former newspaper headquarters to a repurposed bank vault, each property offers up its own alluring appeal. Michelin star restaurants, great bars, elegant in-room amenities and booming nightlife are easily found at these five converted hotels.

Originally constructed for the American Women’s Association Clubhouse in 1928, Hudson New York (a Morgans Hotel Group property) has since become a reflection of New York itself. The doors opened as the Henry Hudson Hotel in 1941, as a home to Dutch troops during WWII, as the United Nations Security Council in 1946, and as the headquarters for Channel Thirteen and Sesame Street Studios in 1985. In 1997, Hudson underwent a three-year design process and re-opened in October 2000. A mainstay in an ever-evolving metropolis, today Hudson features 892 rooms that sit atop a private park, a soaring lobby space with 40-foot ceilings, an intimate library bar, a terrace with sweeping views of the city, a modern-day beer hall and burger joint with nightly entertainment and much more.

Built between 1887 and 1889, the building that is now Hotel de Rome served as the Dresdner Bank’s headquarters until 1945. Designed by architect Ludwig Heim in the Renaissance style, the original building only had three floors. Three additional floors and a roof terrace were added in 1923. Formerly a cashier’s hall, the ballroom’s mosaic floor contains the names of the bank’s four main offices (Dresden, Bremen, London and Berlin). It was briefly used as a cinema during the Communist era. Now, Hotel de Rome’s Spa de Rome is located in the old bank vault (original features include a 15cm thick steel door leading to a treatment room. The Gold leaf mosaics on the walls reflect where the bank once held its gold deposits.

This seven-story building was transformed into a 110-room boutique hotel and opened May 2015. The city is fantastic and the property aims to capture the essence of Portland by enabling guests to get under the city’s cultural skin through Maine-based artisans, craftsmen and local culinary talent. Creative, dock-to-table and farm-to-fork menus are offered at the new 65-seat restaurant UNION, run by Executive Chef Josh Berry – a self-proclaimed “Mainer.”

Portland’s newest hotel was constructed in 1881 by the Portland Seamen’s Friend Society and served as a safe place/ boarding house for sailors. In 2013, four friends – Jessie Burke, Jonathan Cohen, Matt Siegel, and Gabe Genauer – with zero hotel experience acquired the building and began a total renovation project to restore this once-great building to its former glory. The property bridges the gap between hotel and hostel, providing private + bunk accommodations to foster an inviting, adventurous atmosphere and community.

Built on the Roman ruins of Emperor Augustus’ palace, the Grand Hotel Excelsior Vittoria has a regal history and has welcomed the likes of Sophia Loren, Jack Lemmon and Queen Margaret since 1834. Just a 20 minute ferry ride to Capri and a little under an hour to the stunning isle of Ischia and a quick drive to the amazing Amalfi coast– the hotel has been in the Fiorentino family for 180 years and never changed owners, truly offering a quintessential taste of iconic Italian hospitality.