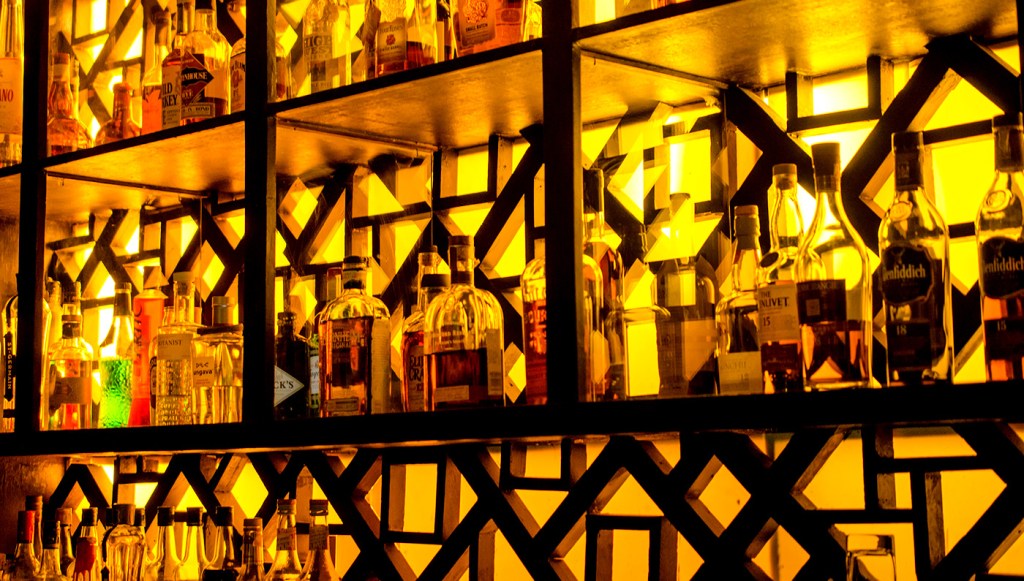 The Philippines has landed on more than one “Top Destinations” list in the past year. Its popularity is no surprise, given that its beaches rank among the most scenic on Earth. However, the country’s capital holds a rather unexpected secret: Manila’s forte for craft mixology and penchant for speakeasy-style romance. Down some dark alleys, you’ll happen upon doors without signs, hiding a slice of pre-Prohibition-style bartending within. Push the correct panels of a sandwich-shop wall and you’ll stumble into a Led Zeppelin–loving lounge that makes a mean Gin Fizz. While the country’s beaches are the main draw for most travelers, its capital city’s speakeasies are worth a stopover for a nightcap. Here are three hidden cocktail bars in Manila.

You’ll likely miss the tiny plaque by the unmarked door in your first attempt at accessing Blind Pig—because the sign is in braille. Knock, wait for the peephole to pop open, and hope there’s a seat inside—where a beautiful chandelier is set low on the rheostat and amber candles cast dark woods and leathers in shadow. In New York City, Blind Pig’s decor might be considered predictable; but in Manila, where Jose Cuervo is still usually the sole tequila on a back bar, Blind Pig is a sanctuary of high-end spirits. The bar was one of the first—if not the first—serious cocktail ventures in the city, and veterans of New York’s iconic Milk & Honey were consulted on the project. (blindpig.ph)

The Exit is the sister concept to Blind Pig. While Blind Pig warmed up Manila to the idea of cocktail ice, bitters, tinctures, and lower volumes on the stereo, the Exit pushed the envelope. To get to the Exit, seek out the Plaza Café sandwich shop a few blocks down from Blind Pig. The bright room is filled with the smell of frying bacon for outstanding turkey sandwiches. Walk to the back and you’ll find a long wall made of dark slatted wood to your left. Give the wall a shove, and step into an easygoing, T-shirt-and-jeans-loving bar. Led Zeppelin is in heavy rotation on the stereo, and the Cosmonauts cocktail (fresh crushed raspberries, lemon, and gin) is a must-try. (+63.2.551.1283)

ABV is a very novel bar—as in The Great Gatsby or A Farewell to Arms. Inside the British-style pub called Lazy Bastard is a wooden door hiding an antique elevator shaft that leads you down into a drinking den seemingly straight out of the 1920s. ABV is filled with a surprising selection of absinthes and—no surprise—a menu that features the green liqueur in cocktails of the speakeasy era. Order a Sazerac or a Corpse Reviver No. 2, but don’t imbibe too quickly: This den of alcoholic antiquities stays open nightly until the last customer feels like leaving. (abv.ph)