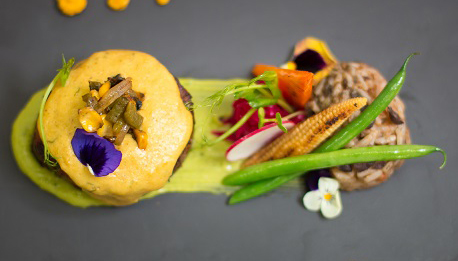 Five of the best Mexican chefs known internationally for their trend setting culinary art will highlight the best of the new tendencies in high Mexican cuisine with the Best of Mexico Riviera Maya. The event will be held from October 5 to 9 at the AAA Five Diamond Grand Velas Riviera Maya.

The exclusive resort invited the prestigious chefs including Zahie Téllez, Carlos Gaytan, Francisco Ruano, and Mikel Alonso to share their creativity, talent and passion for Mexican cuisine through this gastronomic event. The event is a 10-course tasting menu, original dishes featuring ingredients and seasonings from all of Mexico. The special tasting menu will be offered over the four nights, and is included in the daily rate for all guests of this top all-inclusive resort.

“We want our guests to take with them an unforgettable memory of Mexico through the best of its gastronomy,” said Rodolfo González Munguía, Managing Director of Grand Velas Riviera Maya. “The gastronomic event is yet another part of our resort’s commitment to maintaining the highest quality standards, creating unique experiences and adding value for guests. It complements what we call our international culinary tour as we feature cuisines of the world in our Grand Velas gourmet restaurants where guests can dine at no additional charge,” he added.

The hosts of the event, Chef Ricardo de la Vega of Frida, awarded Four Diamonds by AAA, and Executive Chef of the resort, Michel Mustière, Maître Cuisinier de France, added that the Best of Mexico Riviera Maya was designed to promote the richness of Mexican cuisine through its leading exponents and the use of ingredients, colors and seasonings typical of the different regions of Mexico.

Holding a total of 18 Diamonds by AAA, Grand Velas Riviera Maya has set new standards in the All Inclusive World with food, creativity and presentation comparable to top restaurants in world capitals. In addition to Frida’s Four and the resort’s Five, its Cocina de Autor restaurant is the only restaurant in the world that’s part of an All-Inclusive to hold the AAA Five Diamond Award. The resort’s French restaurant Piaf also holds Four Diamonds.

Frida, named in honor of the famous Mexican painter Frida Kahlo, offers high Mexican cuisine in an atmosphere at once contemporary and relaxing. It has been honored as one of the 50 Best Restaurants in Mexico, featured on the Gourmand of BBVA Bancomer list.

Chef Alejandro Heredia recognized as the best Mexican chef of the 20th century, will be named ambassador of Frida restaurant during this gastronomic event.

With an insatiable curiosity and a passion to create new dishes, Zahie Téllez transmits her energy and joy of cooking at every step. She produces culinary experiences inspired by her background with Mexican and Italian cuisine and enriched by her Lebanese and Mazatec roots and practical studies in many cuisines of the world. She has participated in six seasons of the leading TV show El Gourmet. Besides giving classes, she has participated in gastronomic festivals in India and Italy and is a Brewery Master Sommelier. Zahie is also the owner of the successful restaurant Jose Guadalupe Platos de Cuchara that promotes Mexican cuisine with a modern touch and great quality.

The culinary voyage of Chef Carlos Gaytan, originally from Guerrero, has been marked by hard work, persistence and dedication. His talent and passion for cuisine has taken him to leading hotels and restaurants and to work together with renowned chefs like Michael Garbin and Dominique Tougne. A former contestant on BRAVO’s Top Chef, in 2011, he was named the chef of the year by the American Culinary Federation. His restaurant Mexique is known as one of the best in Chicago, with a Michelin star and awards from Michelin Bib Gourmand among others. With great creativity, love and dedication he has succeeded in creating a revolution in Mexican gastronomy, applying his knowledge of French cuisine yet rooted in traditional Mexican cuisine.

Francisco ‘Paco’ Ruano became interested in gastronomy thanks to his mother’s and grandmother’s teachings. Encouraged by Mikel Alonso and Pablo San Roman, he studied in the Spanish Basque Country at the Escuela de Cocina Luis Irizar. Upon completion, in Europe, he worked in some of the best restaurants in the world, including Mugaritz and El Celler de Can Roca in Spain and Noma in Denmark where he met Jorge Vallejo with whom he worked upon returning to Mexico, in Quintonil. In 2013, he opened Alcalde restaurant, considered the best in Guadalajara for its unpretentious updated Mexican cuisine.

Originally from Biarritz, France, Mikel Alonso studied in the Escuela de Cocina Luis Irizar and began his career in restaurants in Spain under the likes of the famed Chef Arzak of Northern Spain. In Mexico, he has been executive chef of numerous prestigious restaurants, docent of the Universidad del Claustro de Sor Juana, advisor at special events, and speaker and lecturer at leading gastronomic events. Ten years ago he opened Biko restaurant which has consistently been named among The World’s 50 Best Restaurants. Mikel alongside Bruno Oteiza create the singular menu at Grand Velas’ Cocina de Autor, the first all-inclusive restaurant to earn Five Diamonds from AAA. Upon opening the restaurant was also named one of the “100 Best New Food & Drink Experiences” in the entire world by Food & Wine.

Born in Mexico City, Chef Ricardo de la Vega began his gastronomic adventure in the city of his birth. His passion for the culinary arts has taken him to leading hotels and restaurants in Puebla, Oaxaca, Yucatan and Quintana Roo. As executive chef of Frida in Grand Velas Riviera Maya, he has focused on exploring in depth the culinary riches of Mexico. The diversity of its ingredients and different preparations to give diners an unforgettable culinary experience with a modern touch without losing the traditional essence.