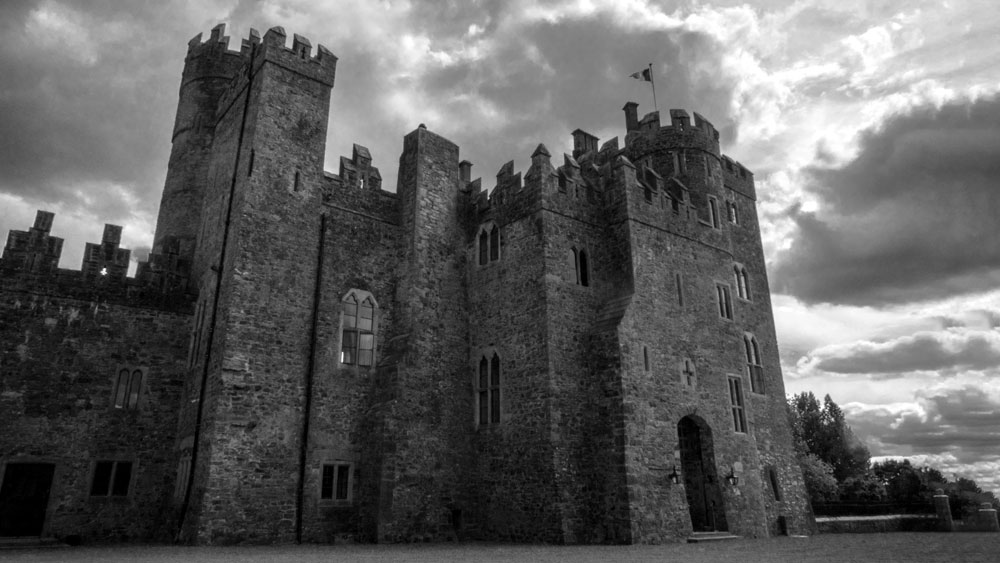 Kilkea Castle is hundreds of years old, and it has the ghosts to prove it. Built in the late 12th century, Kilkea remains one of Ireland’s oldest habitable castles. Located an hour’s drive southwest of Dublin, the estate sits on 185 acres of green meadows and thick forests near the Killeshin Hills. Its scenic setting is ideally suited to falconry, horseback riding, archery, and some spirited ghost-hunting.

Kilkea—which is wrapping up a multimillion-dollar renovation in the coming months—presently offers a tour that covers the castle’s colorful history, including tales of its most famous phantoms. In addition, groups of up to eight guests can take a complimentary nighttime tour that treks through several of the property’s most hotly haunted places—including the castle’s upper levels, its courtyard, and even an abandoned graveyard.

After sunset, the tour begins in Kilkea’s old nursery, located on its upper level. Numerous past guests claim to have seen an apparition of a little girl playing in the hallway leading to this room. Even more bewitching is the sound of the child’s laughter and quick-paced footsteps, which have been reported at all hours. Some lodgers have described a peculiar pull on their bedcovers at night—slight and gentle, as if the blankets were being tugged by a child. The story behind the little girl is still murky, but she is thought to be a past inhabitant of the castle.

The exterior of Kilkea Castle. The Haunted Room is located at the top of the tower.  Photo: Bruno Sternberger/Kilkea Castle

Another otherworldly occupant within the castle walls is The Wizard Earl, a nickname given to the 11th Earl of Kildare, Gerald FitzGerald, after he began toiling in black magic. In the 16th century, FitzGerald had been studying alchemy before his interest twisted toward the dark arts. The Wizard Earl allegedly proved his supernatural powers to his wife by turning himself into a bird—which was abruptly snatched and swallowed by a black cat. Though it’s been more than 500 years since the Wizard’s sinister stunts, his spirit still clamors around the room where he practiced his spells. Perched at the top of a spiral staircase in the castle’s main tower, this so-called Haunted Room has been preserved for many years and remains unused—aside from the ghost tours.

Next, guests venture out to the courtyard and try to spot the Woman in White, another consistent figure on Kilkea’s grounds. She’s been caught crossing the castle’s gravel courtyard and passing through stone walls to reach the nearby garden gate, where she vanishes. The Woman in White floats past in a long, flowing dress that appears to date back several centuries.

An illustration of the property from the 18th century by Lieutenant Daniel Grose, 1792.  Photo: Courtesy kildare.ie

Explorers then trek a few paces behind the castle to the tour’s last stop: the old graveyard. It is the family plot for Lord Walter Fitzgerald, an antiquarian who lived in the estate at the turn of the 20th century and devoted many years to researching the castle’s history. To add even more ghostly grandeur to this plot, it was built atop the ruins of a medieval church.

Kilkea Castle offers these historic property tours year-round, but these nighttime excursions are limited to the fall—and recommended for only the most stouthearted spirit chasers.