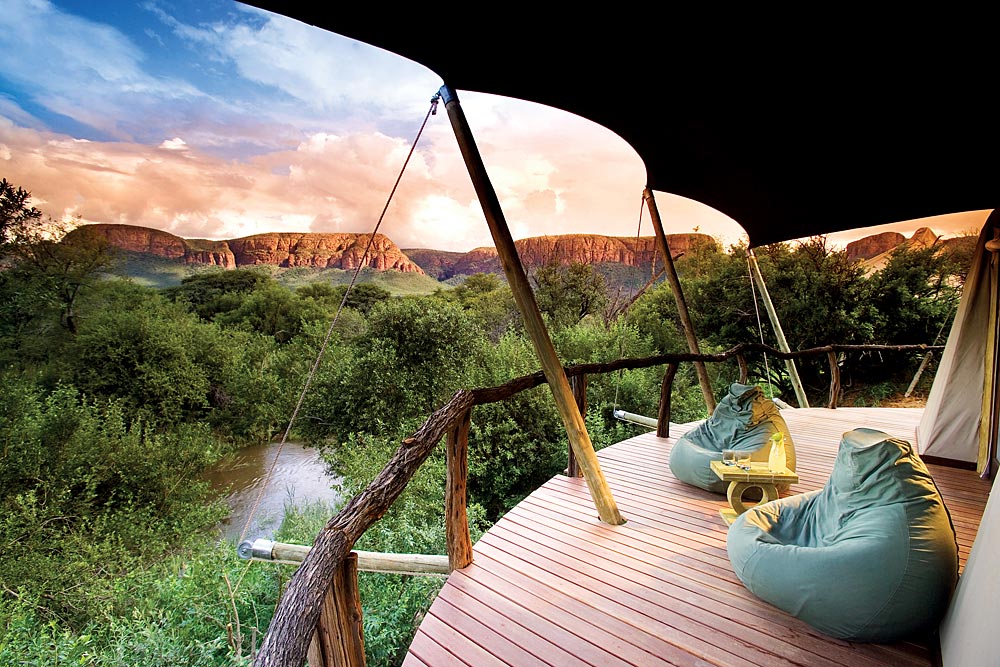 Having arrived after-hours at Marataba, a Hunter Hotels game reserve that borders South Africa’s Marakele National Park, I waited outside the locked, electrified gates for a staff member to meet me. Tired and increasingly impatient after the long trip from the United States, I stood for about 25 minutes, alone, in the dark. I soon learned, however, that the inconvenience was a consequence not of shoddy service, but of a Marataba virtue: So vast is the property that it takes almost a half-hour to drive from the lodge to the gate. When senior field guide Hugo Coetzer finally arrived in a Toyota Land Cruiser, he loaded my bag into the vehicle and then tempered my mood by handing me a cold beer.

Marataba, at the foot of the Waterberg Mountains in the western part of Limpopo province (about a three-hour drive north of Johannesburg), is set within the 57,000-acre Marakele Contractual National Park. This neighbor to Marakele National Park was formed from 14 farms, which the late Dutch philanthropist Paul Fentener van Vlissingen acquired in the latter 1990s. Under an agreement with former South African president Nelson Mandela and Mavuso Msimang, then the head of South Africa’s national parks service, van Vlissingen agreed to purchase the farmland and manage it as a game reserve for 30 years. (The national parks service, known as SANParks, has the option to buy the land and add it to the park at any time.) Van Vlissingen then enlisted Hunter Hotels to design and run the property’s accommodations. Marataba welcomed its first guests at the end of 2005, and Hunter plans to add two more luxury camps on the property within the next five years.

On my visit earlier this year, the night air was chilly as Coetzer and I bounced along the dirt road leading from the gate to the lodge. With the headlights casting a bright tunnel through the darkness, I scanned the periphery for wild animals. A scrub hare darted in front of the vehicle and frantically raced ahead of it, causing us to chuckle at my first sighting of South African game: a bunny rabbit.

At first light the next day, Coetzer led other Marataba guests and me on a game drive, an experience that proved far more compelling than the previous night’s preview. The wildlife at Marataba is abundant and diverse because of the property’s location between South Africa’s dry western and moist eastern regions. In addition to bunnies and the big five—lions, elephants, buffalo, leopards, and rhinoceroses—Marataba’s malaria-free plains, bushvelds, and river gorges support hippopotamuses, cheetahs, giraffes, hyenas, zebras, and hundreds of species of birds.

“Marataba is refreshing,” Neil Davison, the lodge’s general manager, told me. “It’s a place where you can relax and lose yourself in nature without feeling pressured to go on every game drive and obligated to see the big five. It’s a more holistic bush experience.”

I already had experienced, on my first night, some of what Davison meant by “holistic.” When Coetzer and I arrived at the lodge—a contemporary wood-and-glass structure—I ordered a late supper of herb-crusted lamb with curried gnocchi and a glass of South African Shiraz. After dinner, a ranger accompanied me to one of the camp’s 15 tented suites, each of which includes air-conditioning, a stone bathroom, and a deck overlooking the surrounding plains and nearby mountain peaks. My tent was softly illuminated by candlelight, and an egg-shaped copper bathtub had been filled with warm water, fragrant oils, and a scattering of flower petals. I sank into the bath and let the journey wash off before slipping between the crisp cotton sheets on a king-size bed. It was indeed refreshing.