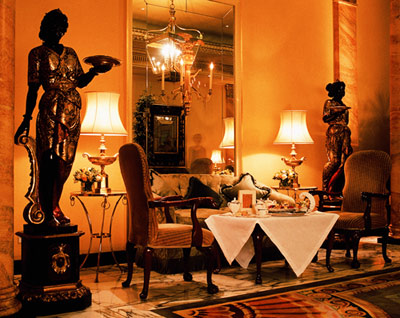 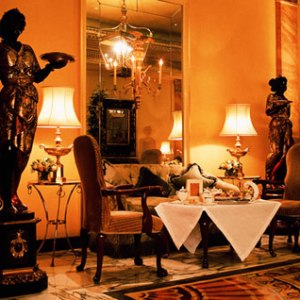 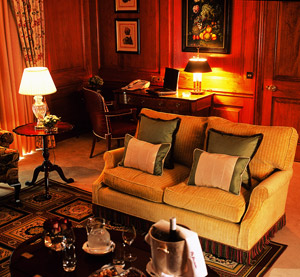 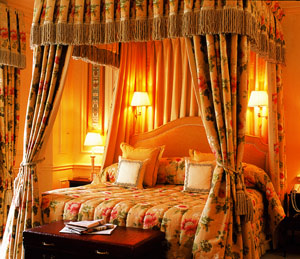 When it was built in 1931, London’s Dorchester hotel raised eyebrows among some Englishmen who preferred their hotels to be understated, monastic, and no more lively than the charts room of the Royal Naval Museum. By contrast, with its soaring Art Deco facade, marble-columned Promenade festooned with voluptuous naiads, and lavish, romantic guest quarters, the Dorchester was the most opulent hotel in London.

It was also the most innovative. In 1940 the hotel opened its Krug Room adjacent to the kitchen. Here, diners could observe dinner being prepared while quaffing the finest vintages of the eponymous champagne. Later, the hotel commissioned Oliver Messel, the famous stage designer of the 1950s, to create a suite of sheer fantasy, with a dining room that suggested a mirrored forest and a grand balcony that included a fountain inspired by the myth of Leda and the Swan. Stuffy it was not.

The hotel quickly became a favorite of the international theatrical set and eventually the habitual watering spot for such noted revelers as Peter O’Toole, Peter Finch, Judy Garland, Richard Harris, Michael Caine, and Richard Burton and Elizabeth Taylor. The last made the hotel their home, as had Somerset Maugham and Noël Coward before them. Celebrities still flock to the Dorchester to hold court amid the Promenade’s statuary and ornate Oriental screens.

Remarkably, the Dorchester in its current incarnation is more luxurious and accommodating than the one known by Richard and Liz. After a multimillion-pound refurbishment this year (It is so crass to mention precise figures, don’t you think?), the hotel offers an even more lavish ambience, more extensive services and conveniences, and state-of-the-art entertainment and communication technologies.

The suites and rooms have been made over in the fresh, bright style of an English country home, and no two are alike. Richesse is apparent in every detail, from the iridescent satin curtain pulls to the thick needlepoint carpets on the floors. Some chairs are done in nailed and embossed leather, others thickly cushioned with embroidered panels, while the chaise longues have been specially designed for watching television or in-room films. The bathrooms, with walls and floors of Carrara marble, are cavernous, and the baths are alleged to be the deepest in London.

All evidence of high-tech modernity is tucked away, discreetly concealed within a single console that is a masterpiece of antique chinoiserie, housing either a 42-inch plasma screen or a high-definition television, as many as 60 DVDs and 5,000 music tracks, Microsoft Office, broadband Internet access, and e-mail. To ensure that the operation of the electronic devices is as smooth as holiday eggnog, the hotel’s staff now includes a personal e-butler. “You e-rang, Sir?”

Top-notch service throughout the Dorchester is assured by the abundance of staff, with nearly three employees for every one room, perhaps the highest staff-to-guest ratio in Europe. Baby-sitting, same-day laundry, and mobile phone rental are just a few of the conveniences available through the hotel.

To immerse yourself in the lore of the Dorchester, you might stroll along the Promenade, which leads to two of London’s most renowned restaurants, the Oriental and the Grill.

The former is the Western world’s most highly rated Cantonese restaurant, offering such authentic dishes as Beggar’s Chicken, which is stuffed with onions, dried red dates, and Chinese red mushrooms, then wrapped in lotus leaves, packed in clay, and baked for five hours. The Grill, furnished in the style of 1930s Barcelona, features such mystifying British favorites as blood pudding and shepherd’s pie. The Dorchester Bar, farther along the Promenade, strikes a chord of whimsy with the glass-and-rhinestone piano formerly owned by Liberace.

In recent years the Dorchester has added an amenity that no other London hotel can offer: access to the Dorchester Club, which is located just off of the Promenade. It is difficult to say what those hard-drinking thespians would have thought of it, but the Dorchester Club is considered to be one of the world’s most exclusive establishments. The mahogany-paneled rooms are all very understated and masculine, with polo, cricket, and golf prints on the walls, and a dignified bar where nobody talks too loudly. In fact, compared to the exuberant style of the place that houses it, the club resembles a typical London hotel.