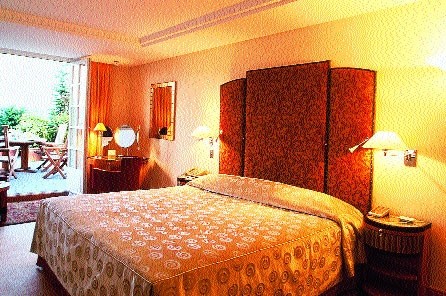 Ever since its opening in 1911, the Hôtel Plaza Athénée has been considered the epitome of understated elegance. Now, after a hugely successful renovation, the hotel fairly glitters. All the guest rooms and suites have been spruced up with new velvets, damasks, and silks. Many have terraces and offer views of the Eiffel Tower or the interior vine-covered courtyard, Cour Jardin, bedecked with geranium-filled flower boxes. Art Deco–period design rules on the top two floors, while the rest of the immensely comfortable guest rooms and suites exude French chic and classicism. Adjacent to the lobby, the Galerie des Gobelins, one of the most inviting parlors in Paris for afternoon tea and pastries, has also been outfitted with new rugs and silk curtains.

The refinement of the hotel also extends to its employees, who know how to appropriately respond to guests of all ages. When a young man insisted on bouncing his soccer ball in the formal lobby, older guests assumed he would be in for a severe scolding. Instead, the concierge signaled a bellman, who took the boy and his ball outside. That kind of understanding for young and old is typical of what makes the Hôtel Plaza Athénée so special. Elsewhere in Paris, you might encounter a desk clerk pompously ignoring your attempts to use high school French. But not here. It’s just another sign of an unstuffy staff who have seen it all and understand how best to make you feel comfortable.

The new Restaurant Plaza Athénée, the realm of Alain Ducasse, attracts what the French call pipole, referring to the famous and beautiful crowd. Ducasse is a chef-magician who uses traditional French culinary techniques to turn out audacious and inspired cuisine. His Restaurant Plaza Athénée is not just the best hotel restaurant in Paris, it is in its own constellation. The new Bar, another star and celebrity destination, has two totally distinct ambiences. In one area, a long illuminated bar made entirely of sculpted and sandblasted glass resembles a newly calved iceberg. It is flanked by Louis XV–style metal stools with leather cushions. The second area is cozier, with cushy leather club chairs as inviting as they are comfortable. On the walls are a series of large paintings with frames so deep that guests can actually sit in them, in effect, joining the art scene.

Along with the bar, guest rooms, and restaurants, the Hôtel Plaza Athénée has a new fitness center with Cuban mahogany paneling that resembles the interior of a prewar ocean liner. But there’s nothing retro about the services. Aside from a sauna, steam bath, massage, and beauty treatments, an in-house personal trainer can guide you through a personalized workout routine.