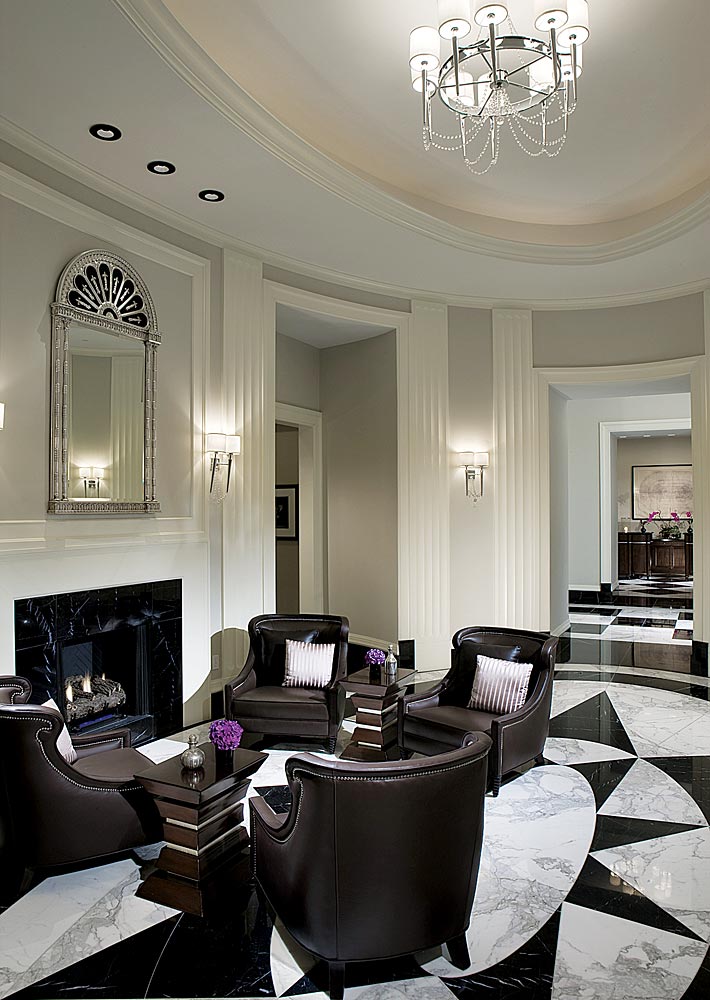 Frank Fleming’s statue The Storyteller—which depicts several figures, including a muscular man with the antlered head of a deer—symbolizes the tale of how Atlanta’s most exclusive neighborhood got its name. The statue sits in a park at the intersection of Peachtree, Paces Ferry, and Roswell roads, where, in 1838, a hunter mounted the head of a large buck in front of a tavern. Residents began referring to the surrounding community as Buckhead, and the name stuck.

Atlantans still have an affinity for nicknames; the city’s residents routinely refer to their hometown’s “Central Park” and “Rodeo Drive.” The monikers—for Piedmont Park and the Streets of Buckhead development, respectively—derive from landmarks in bigger cities, as do the name and urbane style of Buckhead’s newest luxury hotel.

Opened in May, the Mansion on Peachtree, a Rosewood Hotel & Residence, might be more at home in the Big Apple than in Buckhead. Dallas-based Rosewood Hotels & Resorts modeled the property after the company’s Carlyle Hotel in Manhattan and named it after the brand’s flagship hotel, the Mansion on Turtle Creek in Dallas. The name—when it is applied to a 58-story octagonal tower—would appear incongruous if not for the two Buckhead mansion–style buildings that flank the high-rise and house the hotel’s fine-dining restaurant and three of its residences.

For the Mansion on Peachtree’s architect, Robert A.M. Stern, the design’s duality makes perfect sense. “The immediate context of the hotel and residential tower is mixed-use and high-density, with corporate office buildings, other hotels, and shopping centers,” he explains. “But if you look further into Buckhead, you encounter a wonderful residential neighborhood of classical houses and beautiful gardens.”

A formal English garden, adjacent to the three Garden Villa residences, graces one of the two courtyards at the Mansion. (The property’s 42 other residences are located in the tower from floors 32 through 58.) Guests access the hotel through the other courtyard before passing underneath a monotone porte cochere to reach the tower. The entry leads to a series of intimate public spaces that—in the spirit of the Carlyle—feature black-and-white Italian-marble flooring and open doorways with molded frames.

The 126 guest rooms at the Mansion showcase a more contemporary style, juxtaposing traditional Southern furnishings with features such as abstract artworks that retract to reveal LCD televisions. Many of the rooms overlook the sea of deciduous trees that covers the surrounding suburbs.

The hotel’s immediate neighborhood is rife with activities—shopping, dining, touring the Georgia Governor’s Mansion—and with activity. At the nearby intersection of Peachtree, Paces Ferry, and Roswell roads, a bustling eight-acre construction site marks the future home of the Streets of Buckhead complex. Scheduled to open by the end of next year, the property will eventually house more than 80 stores, including Oscar de la Renta, Domenico Vacca, Bottega Veneta, Loro Piana, and Vilebrequin.

Directly across from the Streets of Buckhead, a new St. Regis hotel will open in March. The property will reflect its surroundings with Hirsch Bedner–designed interiors modeled after those found in the classical mansions of Buckhead. Local residents presumably have yet to come up with a nickname for the hotel, but at least one suitable moniker—the Mansion—is already taken.