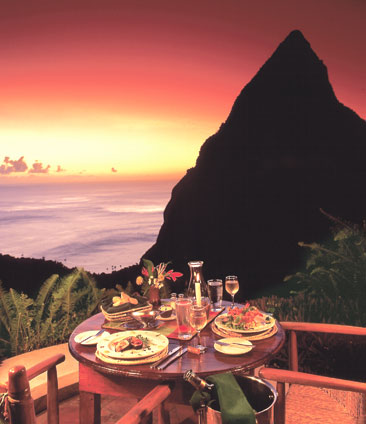 The waitress smiles as she places a loaded water pistol on the breakfast table in the dining room at St. Lucia’s Ladera Resort. “It’s for the birds,” she says. The view from the table is unblemished by obstacles such as walls. You take your morning coffee while gazing down upon Jalousie Bay, its blue Caribbean waters bracketed by the green volcanic peaks of big, broad Gros Piton and slim, sharp Petit Piton. Removing all barriers to nature has its drawbacks, however; birds invite themselves to breakfast, and so you are armed with a water gun to deter the peskier party-crashers.

“They’re after the Equal,” the waitress explains, pointing to the nutshell that serves as a sugar bowl. The pale blue rectangles are buried under the drab brown packets of sugar to avoid attracting blackbirds and finches, which may be the only Ladera visitors that prefer the artificial to the real thing. The resort is ideal for those who enjoy being close to nature without the privation that comes with camping. Its 25 villas and suites are perched upon a volcanic ridge, and each lacks a telephone, a television, and the wall that would face the bay.

Ladera offers several options for enjoying the surroundings. Shuttles run to the local beaches, and a butterfly house and a walk-in volcano are nearby. The adventurous can take a moderately strenuous hike up Gros Piton, and the masochistic can attempt to conquer Petit Piton. Afterward, you can return to the resort and relax, drink in hand, in a poolside deck chair under the stars.

Ladera is a superb destination for stargazing, because there are no city lights to obscure the subtleties of the night skies. In fact, the resort will hold its second annual astronomy week from March 13 through 20, which will feature nightly viewings with the aid of high-powered telescopes that will be installed on the terrace near the pool. This terrace is also a suitable spot for watching the heavens unaided year-round. It afforded an unobstructed view of the November 2003 total lunar eclipse, when the moon’s color changed from milk white to weak tea brown to Bloody Mary red as the Earth’s shadow passed over it.

Although it may seem as though you are next to nature at Ladera, you can maintain a comfortable distance from it when necessary, such as when a drenching cloudburst coupled with whipping winds arrives unexpectedly. Instinct urges you to remain inside, and the lodgings, spacious villas and suites built from polished tropical hardwoods and stone make this a pleasant prospect. Cleverly designed roofs and walls create a sense of being comfortably exposed to the elements. A shower stall in one of the villas carries this perspective to a breathtaking extreme: It, too, is missing the wall that faces the bay.

At the end of the day, you doze off beneath the ample skirt of the mosquito net that hangs over the king-size four-poster bed. The net cannot muffle nature’s noises, however, and once the sun sets, birds, tree frogs, crickets, and other insects begin chirping, hissing, and tweeting. As they do during breakfast, the staff will provide defensive weapons to combat nature’s intrusions—in this case, earplugs.