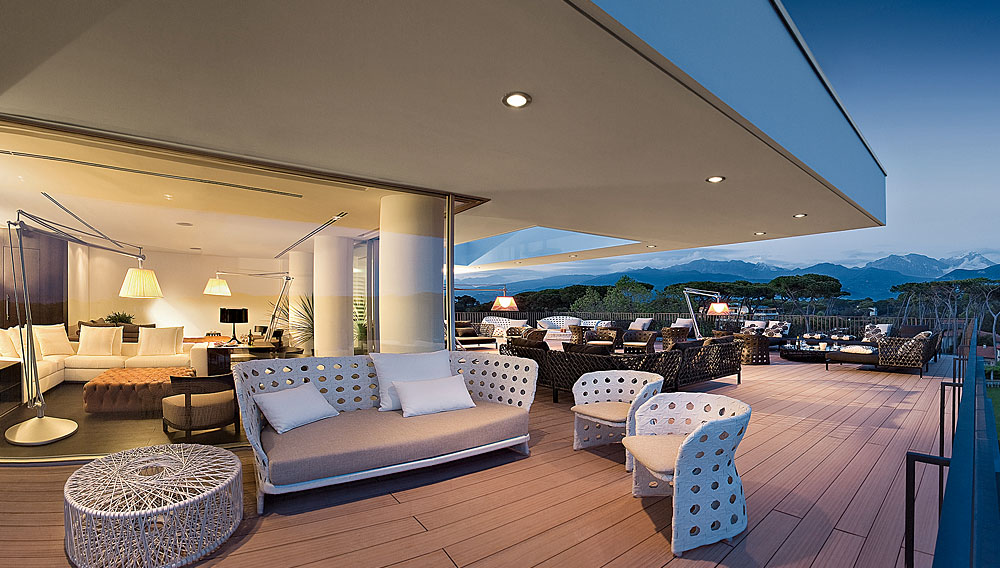 During the scorching summer months in Forte dei Marmi, children play in the fountain on the Piazza Garibaldi, where sprawling sidewalk cafés serve Prosecco and gelato in glasses that perspire in the heat. Bicycles sit idle along quiet tree-lined streets, and modest low-rise villas stand behind manicured walls of shrubbery. Even after the sun sets on the northern coast of Tuscany, the town is still sweltering. But this never deters the locals from their passeggiata on the Via Giuseppe Spinetti, where clusters of designer shops offer one of the few obvious clues that Forte dei Marmi is among Italy’s most exclusive retreats.

The Agnelli family, of Fiat fame, began summering in Forte dei Marmi in the 1920s. Other well-heeled Italians soon followed, and the town has retained its balance of old-money elegance and low-key ambience over the better part of a century. In a bid this past summer to preserve the local culture—and discourage a recent influx of Russians and other outsiders—Forte dei Marmi’s mayor, Umberto Buratti, banned foreign investment in the town, a move that made headlines in newspapers throughout Europe.

In July, the same month Buratti made his declaration, the Principe Forte dei Marmi hotel—which is co-owned by a Russian holding company—opened on a neighborhood street two blocks from the beach. Where existing Forte dei Marmi hotels exude old-money luxury—ornate chandeliers and an abundance of marble (the town’s name, which translates to “marble fort,” refers to the prized Carrara variety that comes from the neighboring Apuan Alps)—the Principe offers a refreshing take on the Italian resort town’s traditions.

Staff members at the Principe dress casually in black suits. The hotel’s basement spa recalls hipster hangouts in Miami, while contemporary furnishings—by B&B Italia, Flexform, Maxalto, and Armani Casa—encourage lounging rather than sitting, especially around the pool and in the gardens. A spiraling Guggenheim-style staircase accesses the 28 light-filled guest rooms and suites, which are located among the new building’s first four stories.

The fifth story at the Principe features a wraparound roof terrace with 360-degree views of the Tyrrhenian Sea and the Alps. Here guests can dine on sushi and dim sum, which are still relative rarities in this part of Italy. The hotel also offers traditional grills and pastas at both of its on-site restaurants, as well as at its nearby Marechiaro Beach Club.

Forte dei Marmi’s private beach clubs are known for their groomed golden sands and 1920s-style wooden bathing huts painted in bright colors. The contrastingly all-white Marechiaro club offers butler service and access to the Principe’s private yacht. After a day at the beach—and a stroll on the Via Giuseppe Spinetti—guests and locals alike frequently retreat to the Principe’s rooftop terrace. The popularity of its restaurant and bar suggests that Forte dei Marmi is open to new traditions, as long as they appear to be Italian.