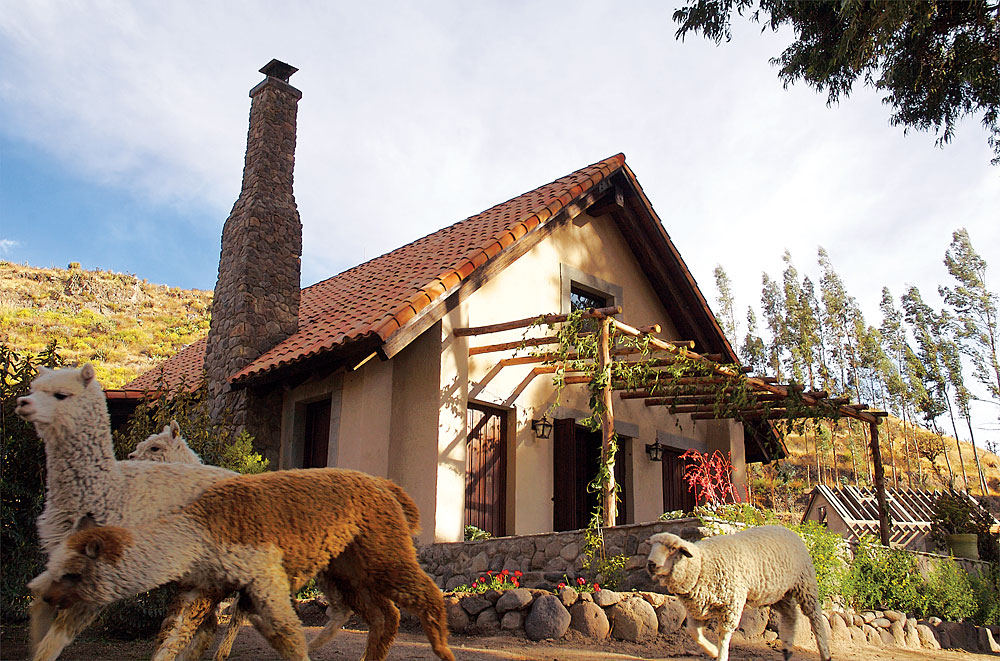 Though unsure of my exact altitude, I am certain—based on my surroundings and shortness of breath—that I am nowhere near sea level. Of course, my gasping also might owe to the precipitous drop directly in front of me, a sheer cliff that plunges into one of Earth’s deepest valleys.

Snowcapped volcanic mountains rise above me, and as I gingerly approach the edge of southern Peru’s Colca Canyon, I spot far below me four Andean condors circling on the thermals that swirl up from the valley floor. The more daring among our group of travelers lean out over the abyss. Cameras click in rapid succession as the massive, vulturelike birds glide on the invisible currents, searching for small game to carry back to their nests in the crevices of the canyon’s walls.

Our nests in Colca Canyon are at Las Casitas del Colca, a 20-room Orient-Express resort that opened last spring on a stretch of terraced hillsides near the valley floor. The resort’s casitas—nondescript on the outside, pure luxury inside—sit just above the Colca River in an agrarian area that has been farmed for some 1,500 years, since the first pre-Incan peoples moved into the valley. “When the Spanish arrived here, they did a census of the native men and found that there were 60,000,” our guide, Patricio Murillo, tells me. “By the time they left, there were just 30,000 total people.”

Murillo introduces us to dozens of traditionally dressed farmers and their families on our way back to the resort. Descendants of the pre-Incan settlers, the locals graze sheep and cattle on the valley’s terraces, till crops by hand, and carry produce and other goods to market in the Colca region’s half-dozen small towns.

Orient-Express built Las Casitas in this rural valley to complement the company’s hotels near the Incan ruins of Machu Picchu and in the former Incan capital of Cuzco. Orient-Express also operates the Hiram Bingham train that travels between those two locations. Visitors to Colca arrive by auto from the city of Arequipa, taking a journey that ascends through the desert, crosses barren Andes plateaus, and may include sightings of the region’s fleet vicuña herds.

Once at the resort, guests can enjoy a massage at the contemporary Spa Samay, embark on a horseback ride from the property’s stables, feed the resident baby llamas and alpacas, and search for the Southern Cross from the casitas’ outdoor soaking tubs. Las Casitas also offers several cultural and adventure excursions, including the trip to the canyon’s rim, as well as classes on Peruvian cooking. One night I learn to make causa, so called because peasants reputedly had only this modest potato dish to feed troops—their contribution to la causa—during Peru’s revolutionary war in the 1820s. Las Casitas chef Faustino Garcia helps us prepare the meal, which involves blending mashed potatoes and yellow pepper, and layering in other vegetables and chicken, crayfish, or tuna.

Las Casitas’ most spirited recipe, however, comes courtesy of general manager César Torres. “Once we had a shortage of limes,” says Torres, discussing the special ingredient of his potent Pisco sours, “so we started using the tart juice of the sancayo cactus, which is here and which is free.” When preceded by a day exploring Colca Canyon, Torres’ concoctions offer a perfect way to catch your breath.