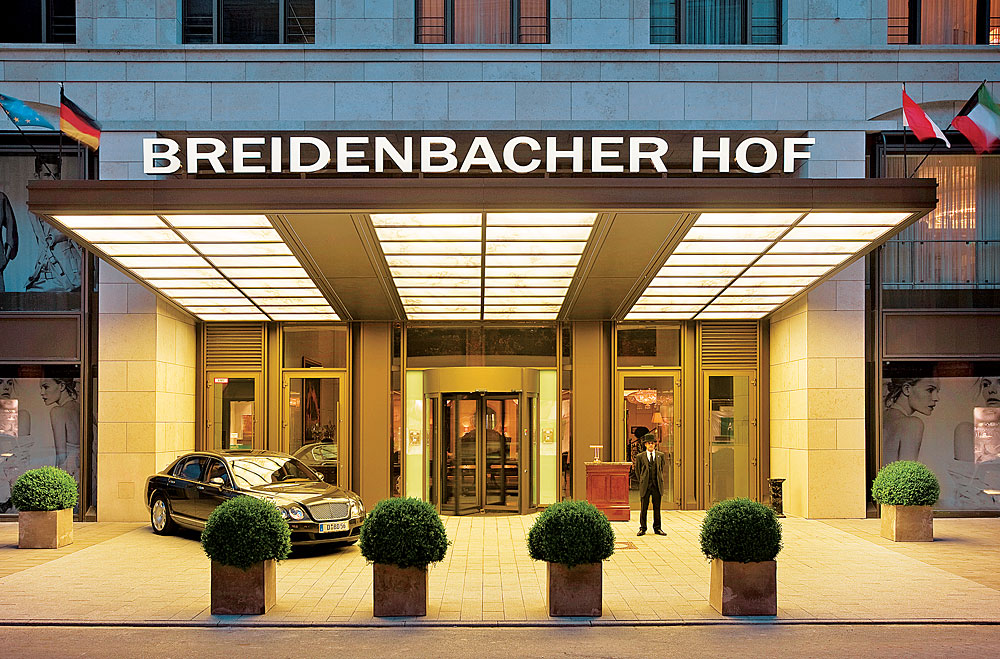 Düsseldorfers are certain that their city is the wealthiest and most fashionable in Germany. And who’s to argue? Gleaming boutiques—from Aigner to Zegna—line both sides of the leafy, canalled Königsallee boulevard in the center of town, while the city’s sense of style is reflected, quite literally, in the whimsical Frank Gehry buildings that rise like undulating mirrors along the harbor. Yet even set against this striking cityscape, the Breidenbacher Hof stands out, not only as Düsseldorf’s newest luxury hotel, but also as one of its oldest.

Conceived in 1806 by architect Adolph von Vagades, the Breidenbacher opened six years later and soon became the crown jewel of Düsseldorf’s social scene. After being destroyed in a bombing raid during World War II, the hotel reopened in 1950 with its old-world formality—and charm—replaced by American-style functionality. The property closed again in 1999 and, after being razed and rebuilt a second time, opened this past May as the first city property in the Capella Hotels and Resorts chain.

Capella, which former Ritz-Carlton vice chairman Horst Schulze founded in 2005, manages resorts in Castlemartyr, Ireland, and Velden, Austria, and plans to open seven other properties between now and 2010. The company bills itself as the world’s first six-star hospitality group, a claim that hinges on the brand’s approach to service. “One of the first things we did was to conduct a survey to ask what luxury customers wanted in a hotel,” says Schulze. “Our survey showed that a lot of people didn’t like dealing with concierges; they said they were arrogant and just stood behind a counter and answered questions. So we have personal assistants in the living room at all hours of the day to do whatever it is our guests need. If you want to go Rollerblading along the Rhine, they will get you Rollerblades.”

Capella’s survey also showed that customers wanted the exclusivity of a small hotel (thus the Breidenbacher’s 95-room size) combined with the sense of activity of a larger property. The Breidenbacher’s living room—a large, comfortably furnished space where guests can have drinks, eat, read, and entertain friends—helps attain this balance, as does the hotel’s cigar bar. The latter space, set on the second floor, features a walk-in humidor filled with Cuban and Dominican cigars and offers a Cognac-and-caviar menu.

Equally meaningful to the Breidenbacher experience is the hotel’s setting on the Königsallee, which, says Schulze, is the best location in Düsseldorf. To be sure, sights abound a short distance in any direction. The nearby Rheinuferpromenade (river walk) is thick with cafés and, at night, illuminated with torches; Old Town is home to more than 250 pubs and restaurants; and the Rhine Tower features a restaurant 560 feet in the air, where it revolves 360 degrees each hour.

Düsseldorf is also home to several cosmetic-surgery centers, including one in the same building as the Breidenbacher that guests can access directly from the hotel. So while some Breidenbacher guests may not resemble supermodel Claudia Schiffer—who was discovered on the Königsallee—when they arrive in Düsseldorf, they might when they leave.