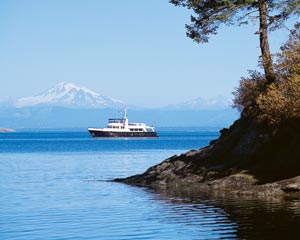 In January 1915, less than a year before Ernest Shackleton’s Endurance descended to its grave beneath Antarctica’s ice floes, Frank Hurley, the expedition’s official photographer, discovered a diversion in observing the killer whales that lurked in the frozen water alongside the hull. The seal-stalking whales, Hurley wrote upon the expedition’s conclusion, “broke through the thin ice as though it were tissue paper.”

I am hoping for a similar wildlife encounter—although most certainly not a comparable fate—as our skiff pulls away from Eagle Nook Wilderness Resort, a secluded 70-acre lodge on Vancouver Island in the Pacific Northwest. Several days earlier, I had arrived at the island aboard an 85-foot Doggersbank yacht named after the explorer’s vessel. The couple who own the newly refitted Endurance are also the proprietors and operators of Eagle Nook, and this summer, for the first time, they are combining their yacht and property to offer a unique two-week, surf-and-turf adventure ($9,950 per person). Guests can observe docile humpback whales (instead of the killer whales that Hurley monitored), hike the hills of the San Juan Islands, savor the gourmet cuisine at Eagle Nook, and unwind with the resort’s spa treatments.

In the skiff, where I am wearing a survival suit in case I should take a tumble into the chilly waters, guide Charlie Everard is steering us through the swells toward Wouwer Island. Earlier that morning Everard and I had lured bald eagles to feed within inches of the hull, and now we encounter a herd of sea lions—hundreds upon hundreds of beasts barking and belching like drunken sailors. It is August, nearly the height of the annual northern migration, when the local colony of sea lions grows to nearly 2,000.

At night, I return to Eagle Nook and its dining room with a cathedral ceiling. While sipping Châteauneuf-du-Pape before our three-course dinner, I attempt to recount the day’s adventure to the owners. They nod and smile politely until I realize that they have seen it all. But this is also why they launched their innovative vacation: to enable their guests to share some of the rare sights that they have enjoyed. “I think that what makes it so special is that everything is water-oriented,” says the husband. “It combines all the attributes of a lodge on the water and a yacht’s amenities.

It’s a great experience. You go on a yacht, get on a helicopter, go to the lodge, go fishing, go hiking. What more could you ask for?”

The two-week stay begins aboard Endurance, a yacht with a top-deck hot tub, satellite television in the saloon and in each stateroom, and high-speed Internet access. For the first week, Endurance cruises through the San Juan Islands before dropping off passengers at Eagle Nook, a 23-room resort with two private cabins. During the second week, you experience a fast-paced schedule of skiff cruises, kayaking, sportfishing, and helicopter tours of British Columbia’s astonishing landscapes. You can also partake in more leisurely activities such as a game of billiards, an outdoor massage, or a session at Eagle Nook’s driving range, in which you whack golf balls from a practice tee across the water to a floating green. But perhaps the most captivating pastime is to sit in the dining room and watch, with the naked eye or with a telescope, bald eagles swoop before the windows. Eagle Nook is nothing if not well named.