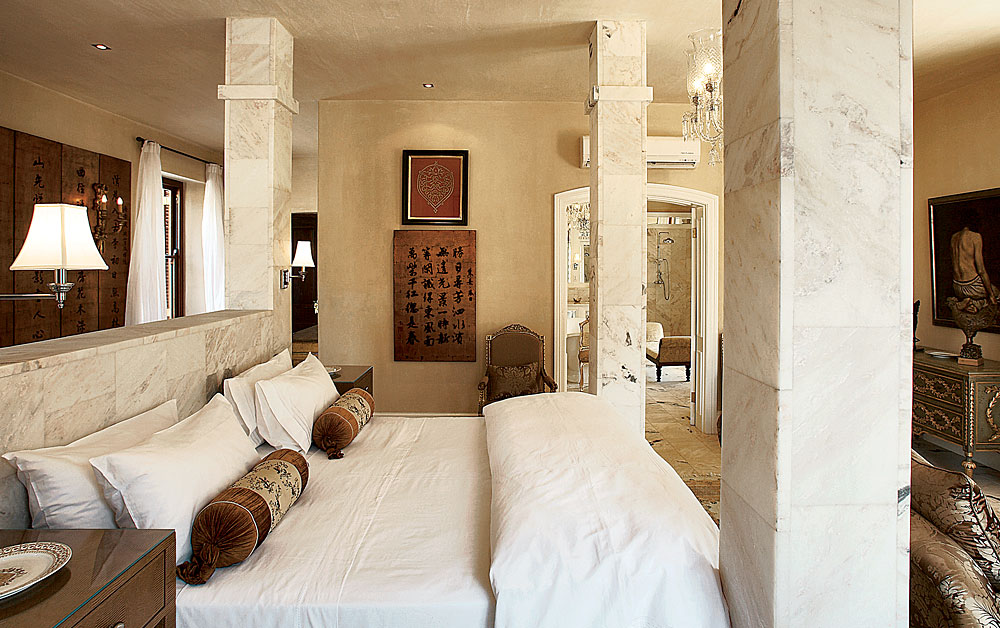 After the revocation of the Edict of Nantes in 1685, a few hundred Huguenots, hoping to avoid religious persecution, fled France and settled on South Africa’s Cape of Good Hope. The ruling Dutch government of the time gave many of the refugees land in a picturesque valley called Oliphantshoek (Elephant Corner), which soon became Franschhoek (French Corner). The French established farms and vineyards in the area, located about 50 miles east of Cape Town, and today the hamlet of Franschhoek is South Africa’s gourmet capital, home to several of the country’s finest restaurants.

The region’s French-like worship of food and wine pairs with a similarly Gallic devotion to design at La Residence, the latest and most extravagant hotel in Liz and Phil Biden’s Royal Portfolio group. The second-generation South African couple’s boutique properties—which include Birkenhead House in nearby Hermanus and the colonial-style Royal Malewane safari lodge in the Thornybush Game Reserve—all feature artful and assorted interiors. “We like an eclectic look,” says Liz, who, along with her interior designer friend Ralph Krall, decorated the rooms at La Residence with works by European, South African, and Asian artists. “There are beautiful old antiques plus a few modern pieces to tone it down. Every room is completely different, and we let guests choose their favorite of the available rooms when they arrive.”

Dining at La Residence also emphasizes choice. “Our guests can eat what they like, when they like, where they like,” explains Liz, who retained several trusted staff members, including general manager Len Straw and chef Johan de Villiers, from the original La Residence hotel, which operated for about five years in a residential section of Franschhoek.

Opened in January, the new 11-suite property stands alone on a 30-acre vineyard with 360-degree views of the surrounding mountains. “The location is incredible, and the building’s design allows for a lot of privacy,” says Liz, who intends to produce wine on the premises. “We don’t have outsiders popping in to have a look or coming for tea.”

Among the more private spaces at La Residence is bedroom number 3—one of Biden’s favorites—which is clad in white marble with accents of gold. The room’s marble four-poster bed is heated so you do not have to touch cold stone. The enormous, white marble bathroom, which is paneled with mirrors, prompted one French guest to exclaim, “Versailles! Versailles!”

By contrast, room 11, known as the Maharajah room, has black-and-white porcelain floors, a heated built-in bed with a headboard covered in an 18th-century embroidery, and paintings of tigers and maharajahs on the walls. Hand-cut crystal chandeliers made in India illuminate this room and others; the same manufacturer produced nearly 60 crystal fixtures for La Residence, including the nearly 15-foot-high lobby chandelier, which arrived in 25 separate boxes. “My husband says I entered the hotel business because I like to shop,” says Liz, a former fashion executive, with a laugh. “But it’s not true. I love to see people enjoying what I’ve put together.”

With their extravagantly romantic La Residence, the Bidens have put together a hotel that masters another French specialty: the art of seduction.