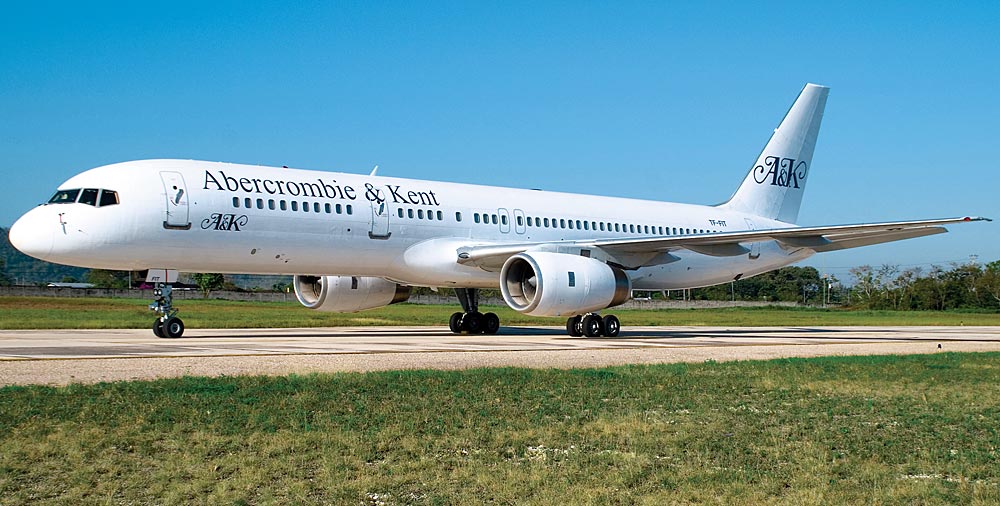 Shortly after takeoff, on a demonstration flight for travel agents and a handful of writers, the passenger cabin filled with a customary sound of first-class travel: the voices of flight attendants proffering hors d’oeuvres and cocktails as they moved through the aisle. This was about the time when normally I would open a book, switch on a movie, or begin to doze off.

But this flight, from New York to Reykjavík, Iceland, aboard a Boeing 757 custom-configured for tour company Abercrombie & Kent and operated by Icelandair, was chock-full of reasons to stay awake—reasons besides Sigrun, the smiling young flight attendant who was kneeling at my side to pour a glass of Icelandic vodka. To snooze would have been to miss out on all the fun.

The essence of first-class flight has become solitude and inaction. From takeoff to landing, bedlike seats, electronic entertainment, and servings of gourmet cuisine and fine wines lull you into an inert state. The opulent Boeing built for A&K, which began offering private tours aboard the jet this year, presents an alternative environment. Instead of carrying 186 passengers, as a 757 does in airline mode, the plane has been reconfigured to host a maximum of 52 guests, each of whom pays $77,750 to $100,000 to crisscross Africa or South America or to go cultural-treasure-hopping around the world. (The next trip, the $99,000 Cultural Treasures, starts in October and has a 24-day itinerary that includes two- and three-night visits to Tahiti, India, Jordan, Russia, and other destinations.) In addition to Sigrun and four other flight attendants—each a striking example of Scandinavian hospitality—the plane’s onboard staff includes four A&K tour guides, a luggage manager, and a chef and his assistant.

Because most flights last no more than three and a half hours, A&K and the Icelandair crew promote socializing instead of slumber. While you can relax in seats that resemble Barcaloungers and are spaced 5 feet apart, you also can mingle in the aisles or gather with other passengers in the teak-appointed dining lounge in the rear of the plane. There, a dinner on our trip began with a Grand Siècle Champagne from Laurent-Perrier and blini with Icelandic caviar. Main courses included roasted fillet of lamb on a bed of polenta, and white-wine risotto with chanterelle mushrooms. “Just like on a cruise ship, we go into town to seek out fresh provisions from local markets whenever the plane touches down,” says chef Sigurdur Jonsson, who formerly headed the kitchen at Iceland’s famed Blue Lagoon geothermal spa.

The jet’s bar offers such spirits as Macallan and Glenlivet single malts; Reyka, an Icelandic vodka filtered through lava; and, for the dauntless, Brennivín, an Icelandic schnapps. No less intriguing is the Icelandic Glacial bottled water: “It flows from a spring that is shielded from the elements by an impenetrable barrier of lava rock,” Sigrun told me, her Nordic accent making the drink sound like something out of Beowulf.

Sigrun’s sincerity is a key part of the plan for A&K, which formerly operated a 757 that fit 88 passengers. “Many of our clients said they would gladly pay double to have a more intimate experience,” said company president Scott Wiseman.

Now they have their wish.