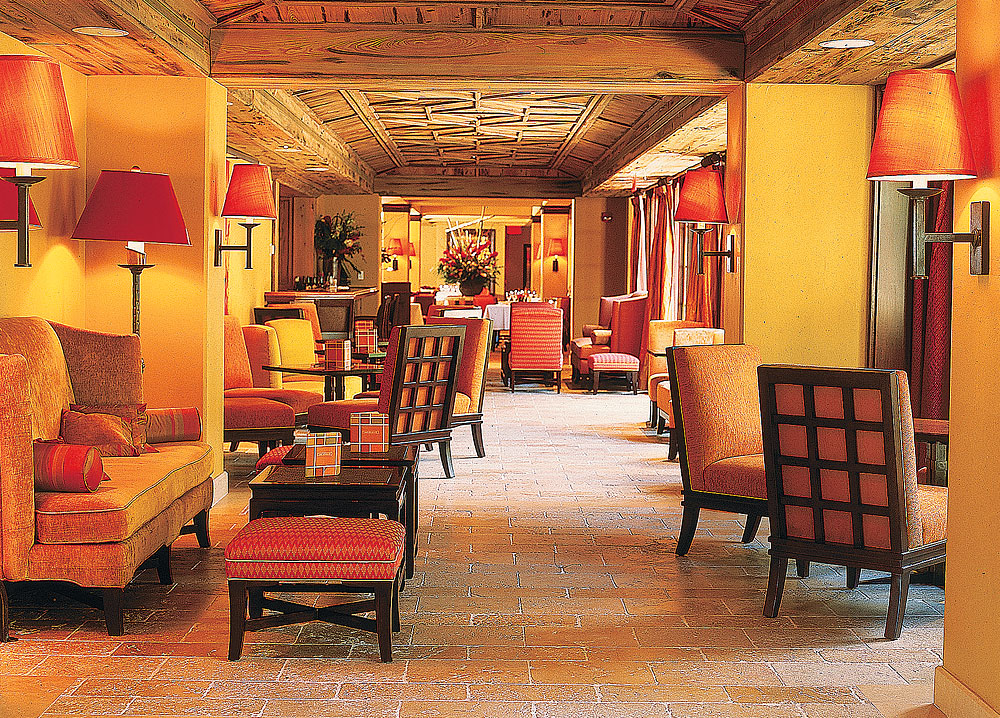 As she hurries through pecky cypress–encased hallways at the Brazilian Court hotel, Leslie Schlesinger rattles off orders and queries to Leticia Bilotta: “Get that drape fixed!” “That cushion needs to be regraphed!” “Is it cold in here?” Bilotta, the hotel’s general manager, nods in agreement with Schlesinger, who owns the fabled property in Palm Beach, Fla., and designed its new interiors. Six years ago, the high-energy perfectionist from Tiburon, Calif., embarked on a room-by-room renovation of the 1920s-era property, and in January she signed off on the hotel’s final three suites.

Architect Maurice Fatio, who designed an addition to the Brazilian Court in 1936, also designed Schlesinger’s home in Palm Beach. So in 2002, after learning that the future of the hotel was in jeopardy because the owner had filed for bankruptcy, Schlesinger, her husband, Richard, and the couple’s three sons acquired the Brazilian Court. Although the family had developed real estate up and down the eastern seaboard, they had never owned or operated a hotel.

Schlesinger, who describes her role in the family business as “walking jobs and busting heads,” began renovating the Brazilian Court’s Bogart Suite in 2003. “Our feedback from guests was, ‘We want more of this!’ ” she says. Thus, she continued operating and remodeling the hotel simultaneously, a process that included enlisting woodworker Alex Cousteau to install mahogany built-ins in all of the guest rooms. “Alex came to one of my show houses 20 years ago and afterward sent me a wooden box with his card,” says Schlesinger. “I was so impressed by the box that I went out to Wellington—horse country!—to see if he was worth it.”

Cousteau’s pecky-cypress ceiling panels—the results of an 11-step aging process—create a Provençal atmosphere outside the Brazilian Court’s restaurant, which is helmed by Schles­inger’s “dear friend” Daniel Boulud. “I’m able to create these things and have all my buddies realize them,” says Schlesinger. “And ultimately the guest is the one who wins the most.”

In 2008, during their renovation of the Brazilian Court, the Schlesingers formed the Obadon Hotel Group and have since acquired the Mayfair Hotel & Spa in Coco­nut Grove; the Traymore Hotel, which is under construction in South Beach; and the Omphoy Ocean Resort in Palm Beach.

It is raining at the Omphoy construction site when Schlesinger arrives for a visit in December. Formerly the Hilton Palm Beach, the Omphoy was “the ugliest building you ever saw,” she says, so she drew up plans for a copper-clad exterior with glass finishes, a glass-bottom pool, and other pools that would reflect onto white walls. “Not in Palm Beach you won’t,” Schlesinger says was the city’s reaction to her vision. “They said it looked like Vegas. ‘Maybe we could use a little Vegas,’ I said. Wrong thing to say.”

The city dictated that the hotel’s facade and footprint could not change, but three years of red tape did not stop Schlesinger. “It’s not the hotel I intended, but at one point I had to say, ‘Leslie, what are you going to do to make this special?’ The one thing I had going for me is the water.”

Once guests enter the oceanfront resort, which opens in April, they will be immersed in water. A two-story waterfall and koi ponds will grace interior public spaces, and the restaurant will appear to float over the ocean. The hotel will also include a beach club, which will be open only to club members and to guests of the Omphoy and the Brazilian Court.