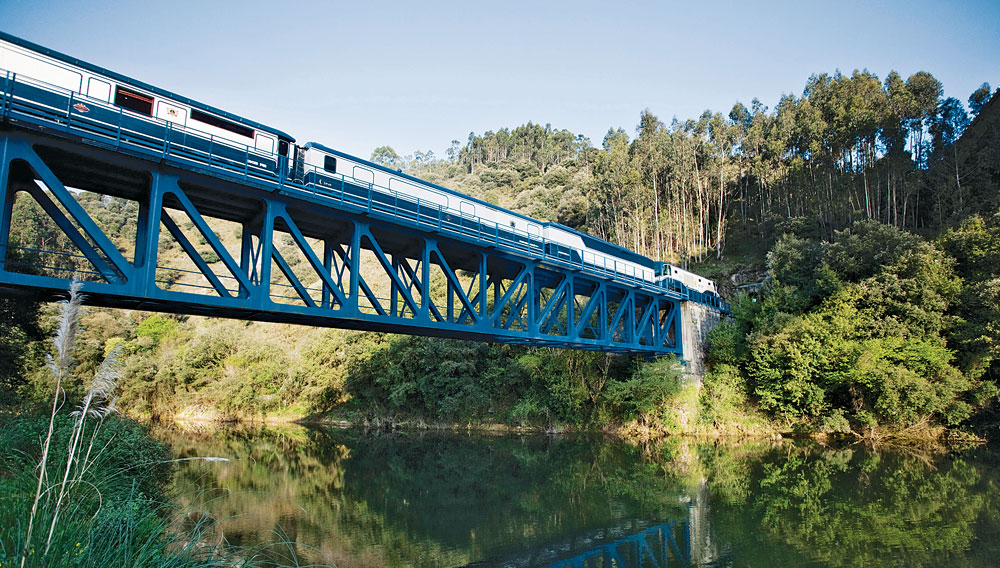 ‘‘Asturias is the real Spain,” says Bárbara Callisto as she points to the region’s misty village of Covadonga. “The rest is just reconquered land.”

Looking out over the emerald landscape—which is conspicuously void of flamenco dancers, bullfighters, and sun-drenched beaches—I realize my concept of Spain might be a bit skewed. But if Asturias is indeed the real Spain, then why has no one heard of it?

Callisto, our private guide aboard the tourist train El Trans­cantábrico Gran Lujo, soon leads us to Covadonga, where in 722 Asturias king Don Pelayo supposedly commenced the reconquest of Spain with his defeat of the Moors. The tour is typical of the eight-day journey along the Transcantábrico line, which since 1983 has guided travelers along the length of Spain’s north coast through Galicia, Asturias, and Cantabria. Using the system of narrow-gauge rails constructed for the coal industry, trains make stops in out-of-the-way locations that have yet to become part of popular itineraries in Spain. And yet it was here, on the nearly 30-year-old route through the rural north, that the state-owned railway company FEVE chose to launch Spain’s most refined rail experience ever.

Debuted last year, El Transcantábrico Gran Lujo is touted as “the most luxurious train in the world.” The train carries Pullman lounge cars that date from 1923 and luxury suites with hydromassage showers, queen beds, leather sofas, and Wi-Fi service. As many as 28 guests have access to lounges, bars, and live music on most nights. Eight-day tours, which venture along the coast of the Cantabrian Sea, are available from March through December and are priced from around $5,000 per person.

Gran Lujo’s passengers spend afternoons off the train, wandering through the medieval alleyways of Santillana del Mar, exploring Santander’s polished shores, and walking among Oviedo’s pink buildings. Breakfast and select meals are taken in the dining car, but most meals occur in regional restaurants, where local delicacies such as fabada (beans, blood sausage, hard cider, and brutally blue Cabrales cheese) are washed down with copious amounts of Rioja, Rueda, and Ribera del Duero.

For those who crave the sunny Spain of colorful travel posters, FEVE in May relaunched the Al Andalus train after an eight-year hiatus (six-day trips from about $3,100 per person). Fresh from an extensive remodel, the 1930s-style train, known as the Palace on Wheels, traverses well-known Andalusia, visiting Seville, Granada, and other southern cities.