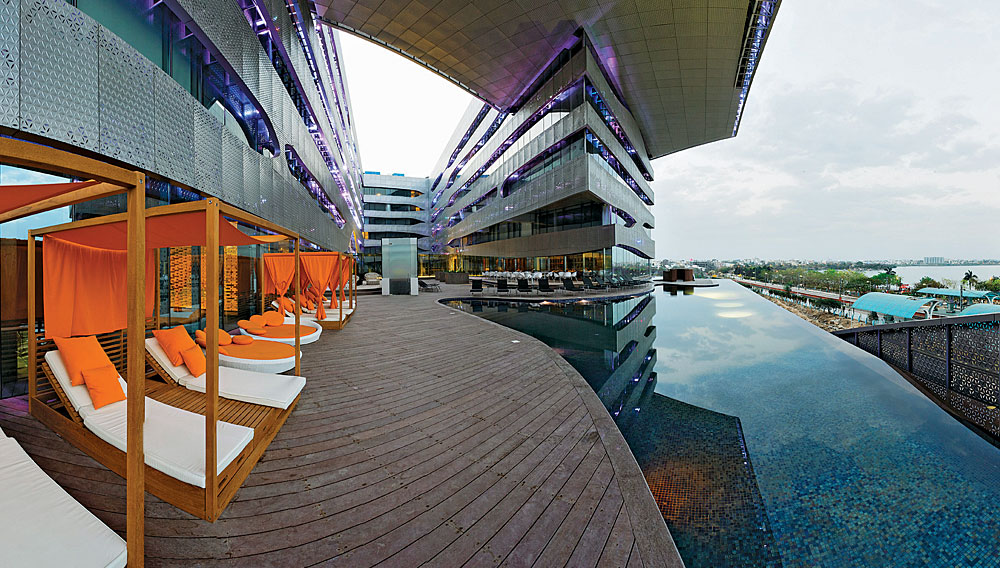 The Biryani beckons. In the shadow of the four-towered Charminar mosque, next to a market stall where customers stand and sip tea with pointed nonchalance, a vendor mans his cart, scooping heaping servings of this spicy rice-and-chicken concoction out of a vat and onto his customers’ plates. The rhythmic tap, clank, scrape, tap of his ladle echoes from the vat, drawing me closer, summoning me to sample this staple of Indian cuisine. This, the 400-year-old Old City, with its bustling markets and ornate, historic structures, is the heart of Hyderabad, the capital of the state of Andhra Pradesh.

The brain of Hyderabad is HITEC (Hyderabad Informa­tion Technology Engineering Consultancy) City, a collection of office parks covering 151 acres that draws tenants from the information technology industry (including recent arrival Facebook). To entice and accommodate these IT firms, as well as biotechnology and pharmaceutical companies, Hyderabad’s officials have built an international airport and invested in other infrastructure projects that have modernized the city.

Better planned and built than better-known Indian cities such as Delhi and Bangalore, Hyderabad also is gaining an edge in attracting leisure travelers. New luxury hotels have opened to accommodate those visitors and provide convenient access to the vibrant markets and centuries-old palaces and mosques that lie within Hyderabad’s Old City. The attractions include Golconda, a 13th-century fort that keeps watch over the royal Qutub Shahi Tombs and Chowmahalla Palace, once the official residence of the city’s sovereigns, the Nizams, who were members of the Asaf Jah dynasty.

The dynasty came into power about 150 years after Hyderabad was founded in 1591. Its members were among the world’s wealthiest people; in a 1937 cover story, Time presented the seventh and last Nizam, Osman Ali Khan, who ruled from 1911 until 1948, as the “Richest Man in the World.” Although the Nizams’ power dissolved a year after India gained its independence from Great Britain, in 1947, their architectural achievements and other aspects of their legacy remain and can be enjoyed by travelers today.

You can even stay in a former home of a Nizam. Taj Falaknuma Palace—the residence of Mehboob Ali Khan, who ruled the city from 1869 until his death, in 1911—reopened in November as a 60-room hotel. A highlight of the property is the leather-paneled Hookah Room, which showcases pipes from the Nizams’ collection.

A more contemporary choice for lodging is the 270-room Park Hotel Hyderabad, which opened in April and represents a collaboration between 25 designers, including Jean-Francois Lesage, Manish Arora, and Tarun Tahiliani. Painted kalamkari designs swirl across the ceiling of the hotel’s Ruby Lounge, and in the unpretentious gentlemen’s bar, Sicca, prismatic tiles printed with depictions of ancient Indian currency frame the bartender as he prepares cocktails.

From behind the delicately carved doors of the hotel’s Aish restaurant, the biryani calls once more. Aish serves a version of this dish that was a mainstay of the Nizams’ royal kitchens. Like Hyderabad itself, this recipe combines new and old elements to produce a savory delight.