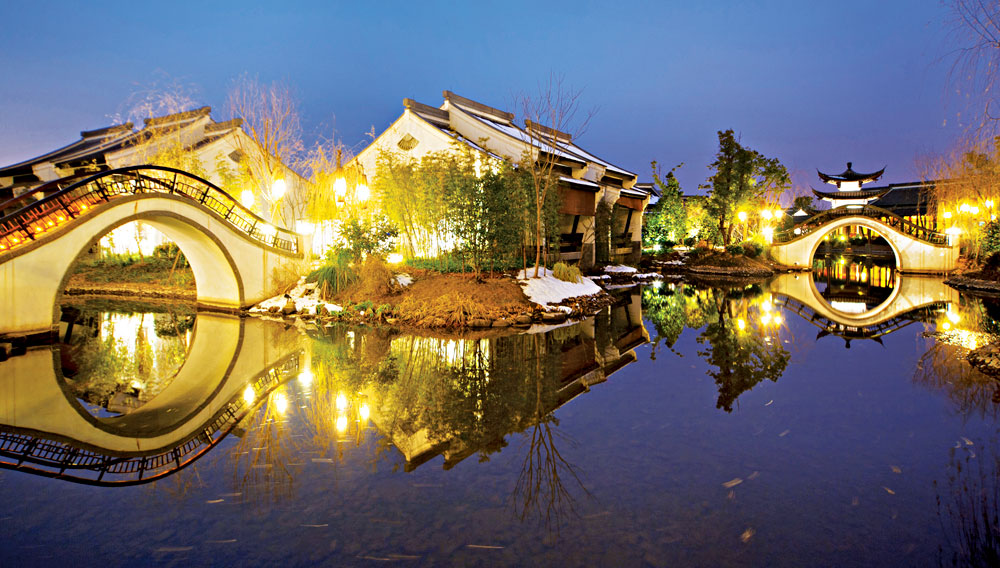 Mornings on Hangzhou’s West Lake begin with a subtle symphony. Docked wooden sampan boats creak and moan, rhythmically bobbing with the lake’s waterline. As a breeze whistles past, dewdrops fall from the tips of willows, echoing through the archways of ancient stone bridges. Cranes and orioles chatter in the distance while soaring over scenic spots named Three Pools Mirroring the Moon and Twin Peaks Piercing the Cloud.

Such a tranquil scene seems implausible in a city of some 8 million people, especially one so close to frenetic Shanghai. But its proximity to Shanghai, just 120 miles to the north, has helped establish Hangzhou as China’s resort town of the east. And though Hangzhou has expanded along one shore of the West Lake, the other side remains a haven of lush hills and valleys, and the area’s ancient monasteries, gardens, and scenic district have been preserved. “In Shanghai, people work away their lives,” says Rudolf van Dijk, general manager at the Four Seasons Hotel Hangzhou at West Lake. “But in Hangzhou, we take time to appreciate the small things.”

The Four Seasons, which opened in October, is one of three new luxury hotels in and around Hangzhou. A short walk from downtown, the property is the only hotel located directly on the West Lake. A moat surrounding the resort’s infinity pool appears to flow directly into the lake, and pagodas housing the 78 guest rooms ($380 to $1,300 per night) mimic the architecture of the historic buildings lining the shore. Modern twists on Chinese design prevail throughout the hotel, especially in the nine-treatment-room spa, where sleek gray-marble soaking tubs and glowing pink screens create an atmosphere both trendy and traditional.

A 20-minute drive west of the Four Seasons is Amanfayun, a more traditional resort that Singapore-based Amanresorts opened on an ancient tea plantation in January 2010. Original cobblestone pathways connect the 42 guest rooms ($650 to $2,250 per night), which are set in converted buildings that once housed plantation workers. Amanfayun’s subdued lighting and isolated location make for an extremely relaxed setting (perhaps to a fault during the evenings). Further tranquility can be found at the resort’s five-house spa, or at the nearby 1,600-year-old Lingyin Temple, where guests can attend Buddhist monks’ afternoon prayers.

Located within the 2,800-acre Xixi National Wetland Park, a 15-minute drive from the West Lake, the 17-month-old Banyan Tree Hangzhou features 72 spacious suites and villas ($395 to $6,000 per night) situated amid winding canals and arched footbridges. Here there is no shortage of activities: Guests can explore an ancient water village, walk among historic Chinese villas and temples, and view the park’s wildlife, which includes 126 species of birds.

The Four Seasons, Amanfayun, and the Banyan Tree will soon be joined in Hangzhou by new high-end hotels from other international brands. Indeed, the birds soaring idly over the West Lake are not the only cranes in the sky, with construction well under way for boutiques, condos, and resorts that, by next year, will include properties from Angsana Hotels and Resorts (a subsidiary of Banyan Tree Group) and Dubai’s Jumeirah Hotels.