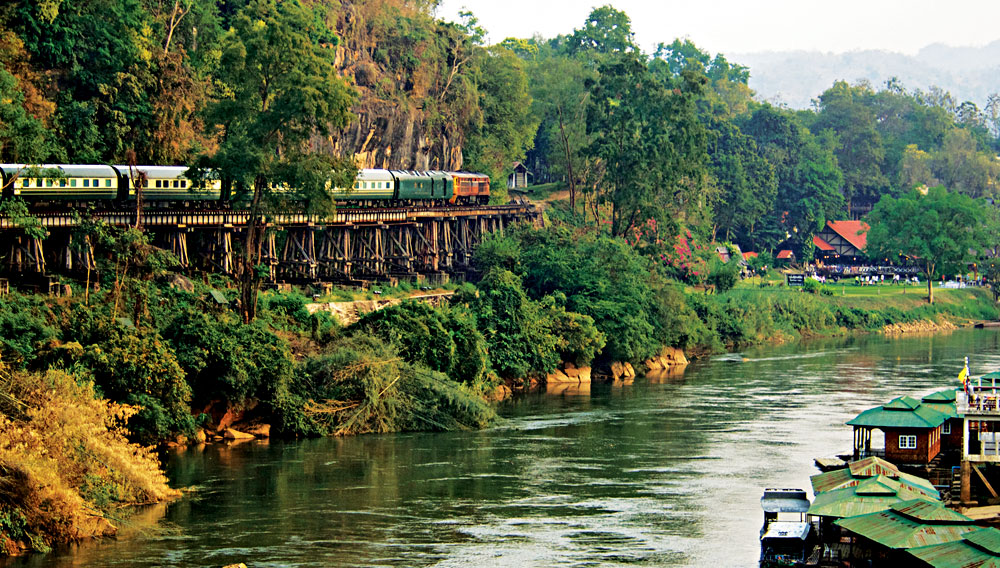 The green-and-gold carriages of the Eastern & Oriental Express lumbered out of Bangkok’s Hua Lamphong station, picking up speed only gradually, allowing passengers in the open-air observation car time to watch the sun set in the distance. From Bangkok, the train always used to head straight to Singapore, but in February the E&O began changing course. Now, on certain dates, it follows the Epic Thailand route and three other Chronicles of Southeast Asia itineraries, all of which are designed to introduce passengers to the people and cultures of destinations seldom visited by Westerners.

On the Legends of the Peninsula trip, the E&O visits the beaches of the southern Thailand resort city of Trang. The Fables of the Hills itinerary travels to Malaysia’s Cameron Highlands, while the Tales of Laos journey crosses the Mekong River on newly laid tracks on its way to the Laos capital of Vientiane.

The Epic Thailand journey would take us to the culturally rich cities of Chiang Mai and Lampang, and to Khao Yai National Park, the country’s oldest wildlife reserve. The first stop would be Isan, and before dinner on the initial evening of our trip, we gathered for a presentation about this flat, arid region near the Cambodian border. We learned that it is home to several 12th-century temples, including Phanom Rung, an elaborately carved sandstone shrine built atop an extinct volcano. The temples are remnants of the Khmer Empire, which encompassed much of Southeast Asia during its rule.

“I was interested in highlighting Isan, which gets very little attention when it comes to international tourism,” said Leesa Lovelace, general manager of the E&O. She explained that two years of research and planning went into developing Epic Thailand and the three other Chronicles of Southeast Asia trips. Some of these off-the-beaten-path destinations do not offer luxury lodgings, but the train serves as a moving five-star hotel, with rosewood-paneled cabins, en-suite bathrooms, and three dining cars serving Eurasian cuisine under the direction of French chef Yannis Martineau. Though it was built in Japan in 1972 and underwent an Asian-influenced redesign two decades later, the E&O—with its floral-patterned carpets and fabrics, wood marquetry, polished-brass fittings, and white-jacketed piano player in the bar car—recalls the Ven­ice Simplon-Orient-Express, whose 1920s carriage transports passengers across Europe.

Plans call for the Epic Thailand journey to take place biannually; the next trips are scheduled to begin October 30 and February 26, 2012. During these weeklong adventures, passengers disembark at a new station each morning for an excursion through the surrounding city, village, or countryside, where they have a chance to meet the locals and experience the culture. Passengers then board the train for lunch and a leisurely afternoon in transit.

Rarely is a Westerner seen in the Isan village of Ban Maichamuak, where the community’s elders welcomed us with a bai sii, a sacred ceremony in which they tied threads around our wrists to bless our journey. As we strolled along the village’s muddy streets, locals demonstrated their centuries-old weaving crafts and invited us into their homes.

“That village is not on any tourist map,” said Lovelace. “We drove around for days looking at hundreds of villages to find one that was desirably located, but also right in spirit and authenticity. Life in that village continues as it does every day, whether we are there or not.”