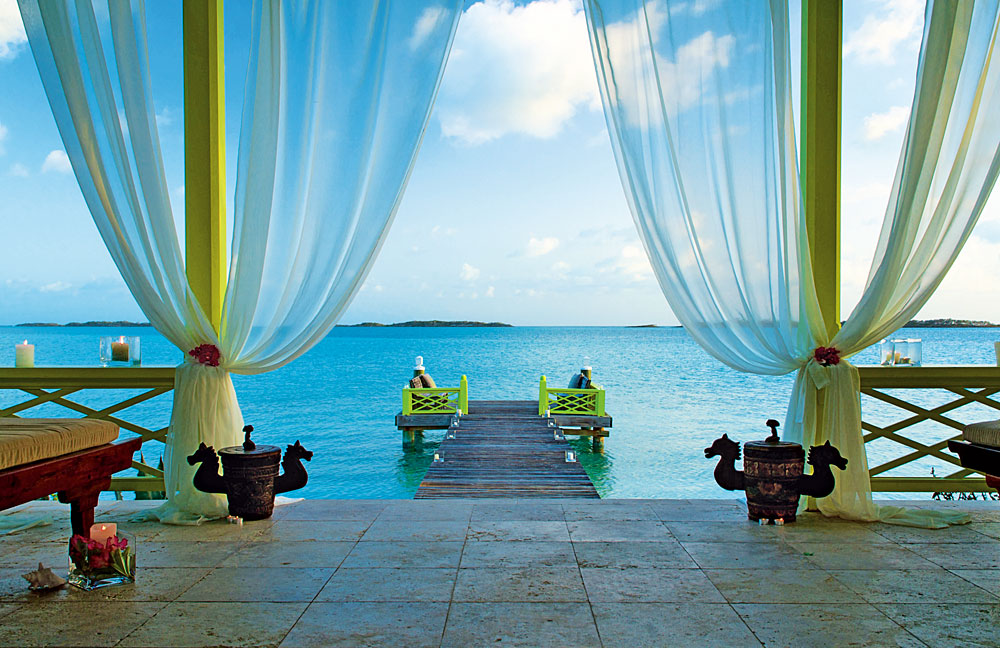 David Copperfield once spent $1 million restoring an antique Orient Express train car, just so he could make it disappear in front of a live audience. So the extent of his latest restoration—of 11 private islands that he acquired in 2006—comes as no surprise. “The whole point is to make it the best place in the world,” says Copperfield of his Bahamian resort, Musha Cay and the Islands of Copperfield Bay. “If I can’t do that, I should give up.”

Copperfield’s cluster of islands encompasses 700 acres and includes 40 beaches and a 2-mile-long sandbar. Guests (as many as 12 visitors can stay for $37,500 per day; 24 for $52,500) spend most of their time on the main island, Musha, which features five beach houses, leisure and dining spaces called the Landings, and such recreational facilities as a swimming pool, a gym, tennis and badminton courts, and nature trails. The Islands provides a 28-foot catamaran, a 23-foot jet boat, Boston Whaler boats, WaveRunners, sailboats, and Windsurfers for cruising among the islands, while golf carts are available for transportation on land. Nontraditional diversions will soon include the Islands’ Valley of the Giants habitat, which Copperfield plans to populate with five rescued giraffes. “We’re also creating a secret village,” he says while leading me on a tour of the resort. “You go into a tunnel beneath a statue that rises out of the ground and exit into a world of monkeys.”

Copperfield—who walks and talks at a rapid pace—has been involved in just about every detail of the Islands’ transformation. “This is how I spend my days,” he says, in reference to making decisions about where to place this Indian urli pot and where to hang that South African headdress (in this case, on the beach and in a room of African artifacts, respectively). “Like my show, everything here keeps evolving and changing. You could come back a year from now, and it would all be different.”

As we walk into one of two master bedrooms at Highview, a 10,000-square-foot manor house on Musha, we see several copies of turn-of-the-century Harry Houdini posters spread out on a bed. (The original posters are located in Copperfield’s International Museum and Library of the Conjuring Arts in Las Vegas; see page 144). Copperfield picks up one of the copies and says something into his walkie-talkie about which poster he wants to hang in the Houdini Room at the Landings. “There is no other hotel or resort in the world that could have a Houdini Room or a séance,” he says to me. “That’s the point of all of this.”

The séance, which takes place in the Houdini Room on a billiards table once owned by Houdini, is one of several Copperfield-enhanced events that guests can experience at the Islands. A treasure hunt is another. “The music for our hunts is scored like a movie,” he says. “You will be transferred in boats, and a pirate floating in the water may whisper a secret as you pass by. It’s like living an epic movie.”

Copperfield also has plans for a haunted area, called Forbidden Island, so his guests can have a Halloween experience every night if they desire. However, he realizes that not all of his visitors will be as intrigued by magic and illusion as he is. “This is also a place where a movie star with a bold-print name can come with her girlfriends and just run around on the beach naked,” he says, adding that those visitors need not worry about their privacy. “When guests rent out the Islands, I will disappear. But if they want me to, I will come and hang out.” —