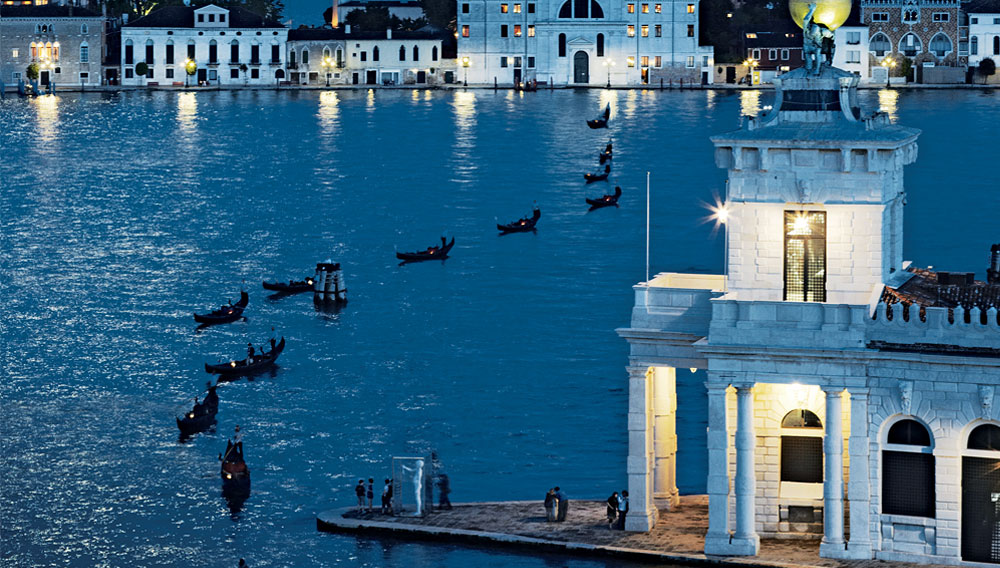 From its ancient canals dotted with gondolas to the Doge’s Palace and Piazza San Marco, Venice is an anachronism with unmatched allure. The many visitors to the Italian island-city can choose among hotels by such international brands as Hilton, Accor, Starwood, Orient-Express, and Best Western. But Francesca Bortolotto Possati, a native of Venice and its only female CEO, says travelers to her hometown should buy local.

“For many of the big, globalized companies, what happens in the city is really not so important,” explains Possati, who for 15 years has helmed the Bauers Venezia hospitality group. “We bring art and everything that goes on in Venice inside our properties and make you a part of it.”

Possati’s family-owned company specializes in turning historic structures into urban retreats with distinct Venetian charms. The Bauers Venezia currently operates four hotels in Venice, the most recent of which, Villa F, opened last year inside a 16th-century residence on Giudecca island, located just across the Grand Canal from San Marco.

Possati’s grandfather, Arnaldo Bennati, started the company in 1930, when he acquired Venice’s Bauer hotel from its original owners. One of his first orders of business for the hotel, which is a few steps from San Marco, was to initiate a decade-long renovation to reintroduce the Gothic-style facade guests see today.

By the time Possati assumed control of the company in 1997, the Bauer hotel was overdue for another update—as was the family business. Undertaking a renovation of her own, Possati overhauled the interiors and split the original hotel—the company’s only property at the time—into two separate entities: L’Hotel and Il Palazzo.

Though interconnected, L’Hotel and Il Palazzo have distinct identities. The 119-room L’Hotel is an Art Deco–inspired feast of marble and gold—and is home to the popular B Bar nightspot—while the 72-room Il Palazzo offers a more subtle and traditional Venetian experience. (The latter property is accessed via private jetty from the Grand Canal or through a discrete alley-side entrance.) Both hotels feature Murano glass chandeliers and fabrics from Venetian textile maker Rubelli, all personally selected by Possati.

Possati’s expansion of the Bauers Venezia group continued with her acquisition of a former convent on Giudecca island in 2000. Vacant for more than a century, the 16th-century structure underwent a two-and-a-half-year restoration before opening as the 79-room Bauers Palladio Hotel & Spa, a resort-like retreat away from the tourist hordes in Venice proper. Possati was careful to preserve the building’s historic details, including a more than 100-year-old fresco that is now part of the hotel’s lobby.

Set adjacent to the Palladio, the new Villa F is the most intimate of the Bauers Venezia group’s four hotels. The apartment-style property—which during the early 20th century served as a pensione for artists, actors, and writers—features 11 suites decorated with Ori­ental rugs and tapestries that recall Venice’s history as a trade hub between the East and the West. Large windows frame the Bridge of Sighs and the cupolas of Santa Maria della Salute.

Three interconnected courtyards make up Villa F’s expansive gardens—a rarity in Venice, where space is at a premium—which include a hot tub and an infinity pool. The hotel’s guests can also find respite at the Palladio’s new spa, which is the city’s largest.

Possati, who is a director on the board of Save Venice—an organization that funds and oversees the restoration of Vene­tian landmarks—was involved with nearly every detail of Villa F’s five-year-long transformation. Throughout the process, she had an eye toward Venice’s—and her family’s—past. “Most of the craftsmen companies we used,” she says, “are the same ones that my grandfather used.”