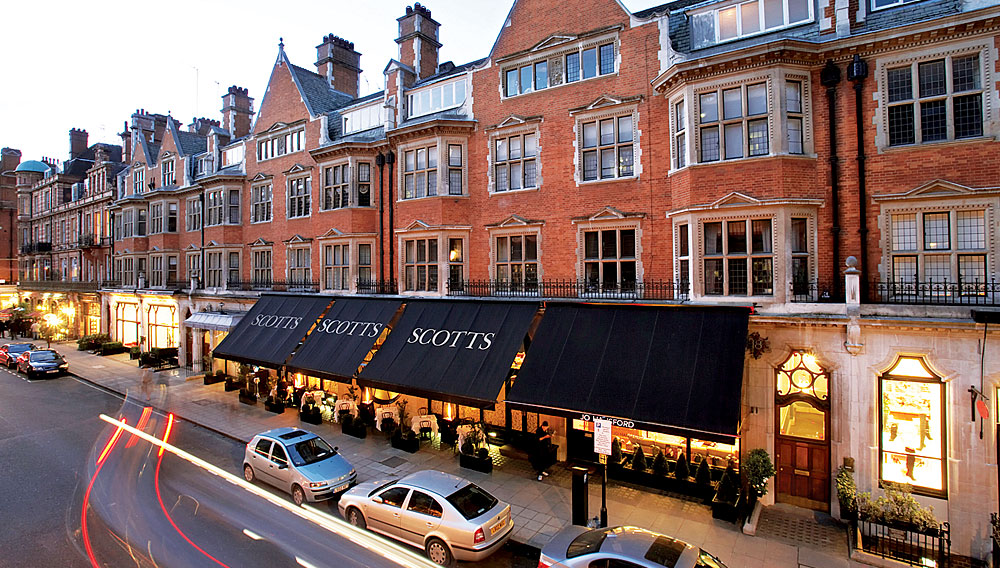 Of all the things that London seems to be short on—sunshine and dispassionate cabbies, to name two—gilded shopping byways certainly are not among them. From Notting Hill’s Westbourne Grove and Brompton Cross in Knightsbridge to Belgravia’s Motcomb Street and the burgeoning Shoreditch Triangle, avenues lined with fashionable boutiques can be found in seemingly every corner of the city. But over the last three years, a new retail row has emerged in Mayfair to rival even Old Bond Street and other legendary London shopping lanes.

Before the autumn of 2006, Mount Street was a primarily residential enclave of brick buildings that housed a few galleries, old gentlemen’s clubs, and members-only casinos. But that began to change in December of that year, when restaurateur Richard Caring relaunched his seafood institution, Scott’s, after a three-year hiatus. He was joined on Mount Street two months later by American clothing designer Marc Jacobs, who opened a richly decorated store in a former antiques shop. “The [Jacobs] announcement kick-started the area’s rejuvenation,” says Anthony Lee, who, as the longtime general manager of Mount Street’s Connaught hotel, is a veteran neighborhood observer.

Today, women striding on überheels jockey for position with construction workers putting the finishing touches on the ateliers of even more newcomers, including the luggage maker Goyard (No. 116), New York clothing designer Carolina Herrera (No. 120), and the costume jeweler Gripoix (No. 108). Despite the frenetic pace of change, the 18th-century Italianate quarter has retained its natty masculine ethos. William & Son, the luxury-goods emporium founded by William Asprey as a storehouse of handcrafted tweed jackets, silverware, and bespoke rifles, refurbished its flagship store on Mount Street last October. Also last year, Dunhill opened a new stand-alone showroom, which is housed—along with a men’s barbershop, a private cinema, a walk-in humidor, and a members’ club with a restaurant and four bedrooms—in the former home of the Duke of Westminster on nearby Davies Street.

Around the corner from Dunhill, the Connaught reopened in 2008 in the midst of a renovation that will conclude this fall with the debut of an Amanresorts-managed spa. Other holdouts from Mount Street’s yesteryear have enjoyed similarly impressive turnarounds—especially Scott’s. The restaurant has retained its patina of splendor, its unfailingly good food, and its undiminished standing on a plinth above the fray, to appeal both to its traditional patrician clientele and to a new generation of signet-ring-wearing Etonians. And in London, there is no shortage of them either.