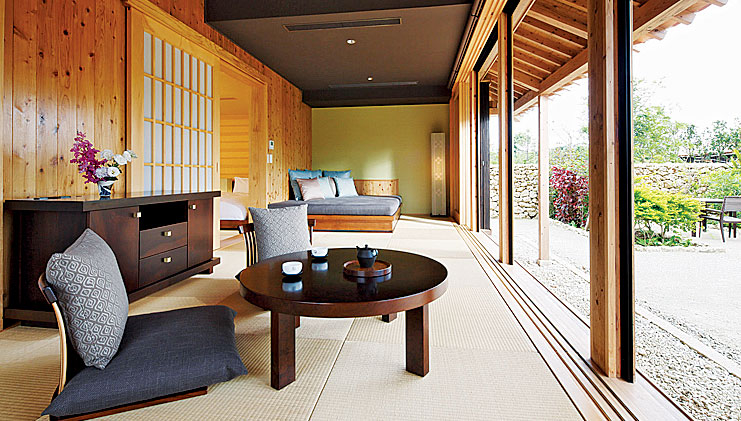 My hands are slick with wet clay as I squeeze, mold, and shape balls of sticky matter into a monster with flaring nostrils and wild tufts of hair. I am nearing the end of an hour-long pottery class at Hoshinoya Okinawa, a traditional Japanese resort that opened in June on the diminutive coral island of Taketomi. An instructor helps patiently as I form my version of the shisas, or lion-dogs, that serve as guardian gargoyles on the island’s red-tiled-roof homes.

Believed to keep evil spirits away, the gargoyles are part of the rich Ryukyu culture that makes this island of just 342 inhabitants a living museum. While the 160-island chain of Okinawa has inevitably changed with the times, the far-flung atoll of Taketomi has remained relatively untouched. A recent census of the 1,500-acre island—which is accessible via an hour’s flight from the Okinawan capital of Naha, followed by a 10-minute ferry ride—accounted for one doctor, no police, six restaurants, one temple, one museum, 328 cattle, 82 cats, 33 water buffalo, and 13 vacation homes. Islanders have their own dialect, and they fiercely protect their Ryukyu heritage, which is more closely related to that of China than of mainland Japan.

Most of Taketomi’s residents live in one of three traditional villages on the island. Hoshino Resorts, the family-owned company behind the Hoshinoya Okinawa, designed the 48-villa property to resemble a village of its own—and spent three years negotiating with local authorities to assure them that its presence would not spoil the integrity of Taketomi.

Built in the typhoon-resistant Taketomi style among thick coastal growth, with access to an adjacent white-sand beach, the 16-acre Hoshinoya brings an element of luxury to the island’s ancient traditions. Buildings are hidden behind white coral gukku walls and a short interior hinpun wall meant to stop evil spirits. A large central swimming pool resembles the rainwater catchment that was used on Tak­etomi before an undersea pipe carrying fresh water was installed from nearby Ishigaki Island.

Within Hoshinoya’s villas, guests sleep in rooms equipped with tatami mats and futon-style beds. Loose-fitting, pajama-like taizaigi are provided for relaxing, whether around the resort or during meals in the spacious dining room. Taizaigi are also appropriate in the Yuntaku Lounge, where visitors gather each evening for complimentary drinks, snacks, and performances by local artists, who might sing or play the three-stringed, banjo-like sanshin.

In addition to making shisas, guests at Hoshinoya Okinawa can participate in shell-ginger-plant weaving classes, stretching and Yonna deep-breathing exercises on the beach, and other complimentary activites at the resort. Off-site excursions include bike rides to Kaiji Beach, known for its star-shaped granules of sand, and sightseeing tours on water buffalo–drawn carts. The tours venture down Taketomi’s neatly swept white-sand roads—which are absent of street lights and traffic lights—passing by village homes landscaped with bright flowers and watched over by shisas.