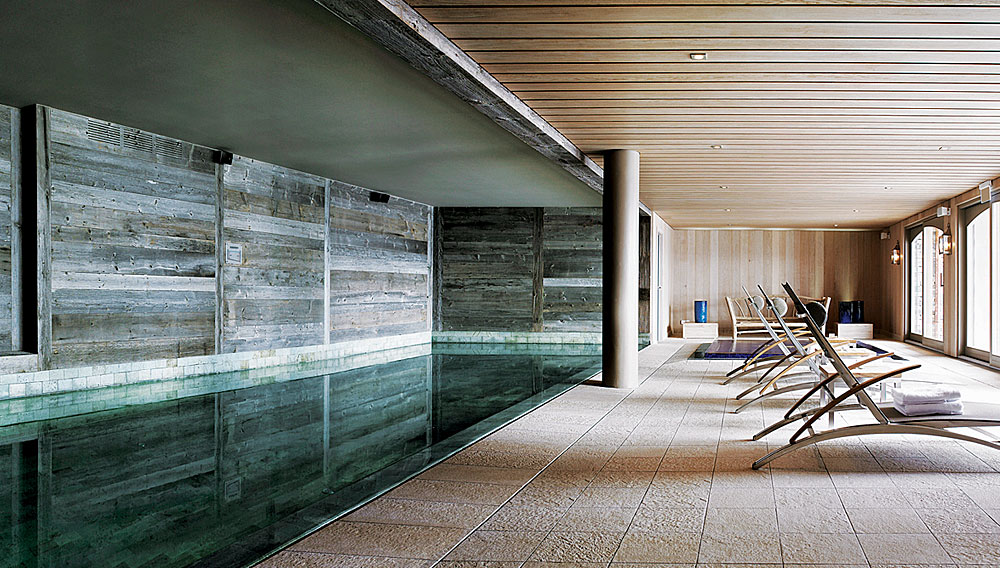 In 1911, Crans-Montana distinguished itself as a ski destination by hosting the first major downhill racing event in the sport’s history. But it was sun, rather than snow, that first attracted visitors to this resort town in the Swiss Alps.

At the turn of the 20th century, health-conscious tourists and tuberculosis patients began flocking to Crans-Montana for its fresh air and mild Mediterranean-like microclimate—said to be Switzerland’s sunniest. By the middle of the century, the town had become a haven for celebrities, many of whom purchased chalets in the area. But as more people acquired property—and several hotels converted to privately owned units—Crans-Montana gradually transformed from a lively tourist destination to a quiet residential enclave. Now, however, two boutique hotels are hoping to breathe new life into the Crans-Montana scene.

Opened last December a short walk from town, the Hotel Guarda Golf overlooks a nine-hole golf course designed by Jack Nicklaus and is adjacent to an 18-hole course designed by Severiano Ballesteros. (Crans-Montana’s golf culture dates to 1908, when the first course opened in town; this September the area will host the Omega European Masters tournament at the Golf Club Crans-sur-Sierre.) An appropriately clublike atmosphere pervades the Hotel Guarda Golf, which has only 25 guest rooms (including six suites) yet offers three eateries plus a spa and wellness area with an indoor pool, sauna, hammam, and four treatment rooms. Sports enthusiasts can take advantage of the fitness room, where a golf simulator enables guests to work on their swings even on Crans-Montana’s snowy days.

Perched high above town, the LeCrans Hotel & Spa has just 15 rooms and suites and three residential units. LeCrans, which opened in February 2009, reflects Crans-Montana’s private-chalet culture with a stunningly chic design conceived by Belgian Christophe Decarpentrie. Each of the one-of-a-kind guest rooms takes the theme of a famous peak or range, such as Everest, Kilimanjaro, or the Dolomites. But the high point at LeCrans is the cuisine: The hotel’s LeMontBlanc restaurant garnered 15 points from Gault Millau Suisse 2010, which also named chef Pierre Crepaud its 2010 Discovery of the Year. At the chef’s table d’hôtes in the kitchen, guests can sample his imaginative culinary creations paired with premium local wines for a remarkable private dining experience.

In addition to its two new hotels, Crans-Montana is preparing for the return of another: The Crans Ambassador Hotel, which first opened in 1972, is undergoing an extensive renovation and is scheduled to reopen in December, offering further evidence that the sun is rising once again on Crans-Montana.