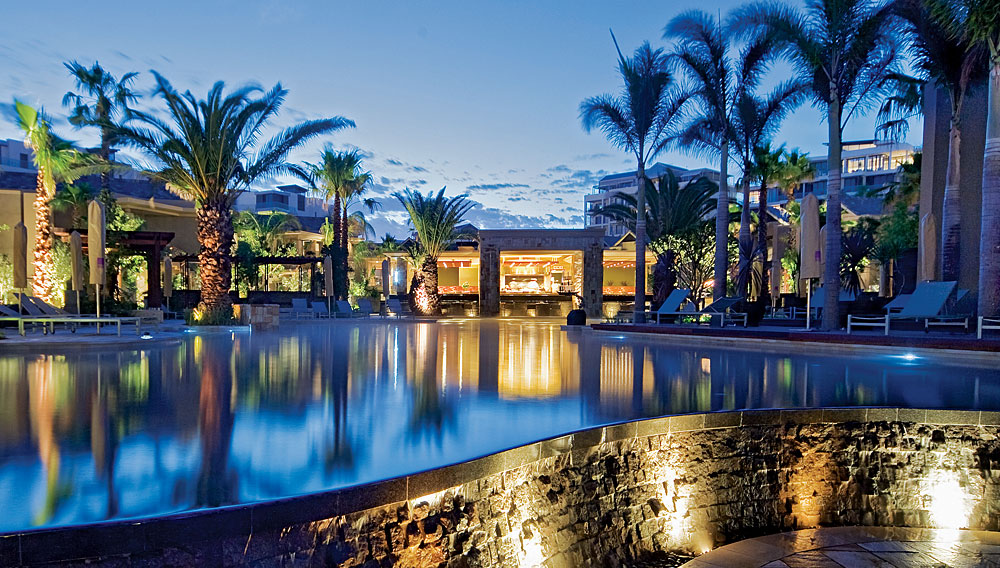 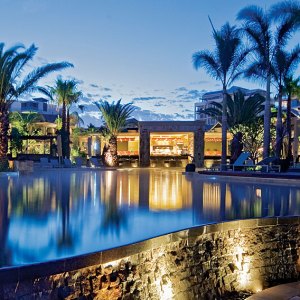 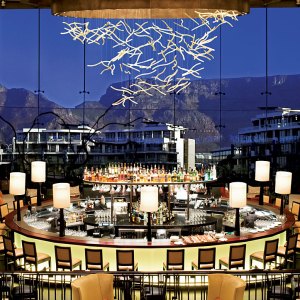 On the One&Only Cape Town’s first official day of operation, I rose before the sun. Parched from the many signature cocktails served at the previous night’s opening celebration, I craved a refreshing swim in the resort’s pool. But as I made the short walk across the footbridge leading to Villa Island, a group of stern-faced men wearing suits and earpieces stopped me: Who was I? Where was I going?

I struggled to formulate a coherent response before Hennie Louw of South African Personal Protection Services intervened. He explained that the grilling was a consequence not of shoddy service, but of the One&Only’s guest of honor, Nelson Mandela. After issuing a quick directive over his two-way radio, Louw informed me that a dip in the pool—next to the former South African president’s suite—was no problem, provided I didn’t mind my slightly overdressed company.

Tight security and high-profile guests are to be expected at a Kerzner International resort. The company, led by South African native Sol Kerzner, operates some of the world’s most extravagant properties, including those in the One&Only and Atlantis collections. One&Only’s newest addition—which opened in April in the upscale Victoria & Alfred Waterfront, just minutes from downtown Cape Town—is a homecoming of sorts for Kerzner, who once owned the Sun City casino resort in Pilanesberg. “For me personally, it’s very special because it’s a place I love,” he says. “It’s quite magical to come back, and I think we’re going to raise the bar for hotels in South Africa.”

In developing the first metropolitan hotel in the One&Only group, Kerzner drew from his portfolio of beach resorts in the Bahamas, Dubai, Mauritius, Mexico, and the Maldives. “I would have been reluctant to build just another Cape Town hotel,” he says. “That wouldn’t have matched up with what One&Only stands for.” The result is what Kerzner calls an “urban resort” that includes a main building on the edge of the marina, plus two lushly landscaped man-made islets: Villa Island, comprising 40 suites, a pool, and a casual dining venue; and Spa Island, home to an Espa-managed wellness facility. The islands are accessible only by bridge from the marina, or via water taxi. “You feel as though you are in a resort,” says Kerzner, “and yet you have the convenience of being in the middle of the city. It’s like a little oasis.”

Charged with the task of bringing this sanctuary to life was New York–based designer Adam Tihany, who worked previously with Kerzner at Atlantis the Palm in Dubai and at the One&Only Palmilla in San Jose del Cabo, Mexico. From his chairs that mimic animal stances to a chandelier of golden crystals in the lobby’s Vista lounge, Tihany avoided the zebra-skin rugs and ethnic sculptures common in African design. Still, his interiors—for which only local materials were used—are clearly African in style: Ebony-colored wood screens and balconies that showcase panoramic views of Table Mountain infuse the resort’s suites with a Capetonian ambience.

In the lobby, Tihany’s golden chandelier floats against the backdrop of Table Mountain, and a fanlike metal staircase leads to Africa’s first Nobu restaurant. Across the lobby at Gordon Ramsay’s Maze, main courses such as a fillet of springbok (a regional antelope) can be enjoyed with a local Pinotage pulled from a shimmering glass-and-steel wine loft that houses the world’s largest collection of South African vintages.

The One&Only also holds an impressive collection of South African artworks, many commissioned for the property. “I wanted the resort’s feel to draw heavily on the rich African culture and heritage that has so greatly influenced my life,” says Kerzner, who applied a similar philosophy to the hotel’s hiring process: At the time of the One&Only’s opening, 90 percent of its more than 400 employees were South African.

Kerzner also hopes to introduce guests to South Africa’s natural wonders. To mark the hotel’s opening, the One&Only partnered with safari-lodge operator Singita Game Reserves to offer a package that includes four nights at the Cape Town property and three nights at any of Singita’s lodges in the Sabi Sand Reserve and Kruger National Park.

Back at the pool, just as the sun was peeking over the horizon, I thanked Louw for accommodating the swim and headed back to my room feeling refreshed. Upon entering my suite, I noticed that housekeeping had made a very early house call, tidying the bed and opening the doors to my veranda to allow the marina breeze to float in—perhaps a breach of security, but a welcome one.