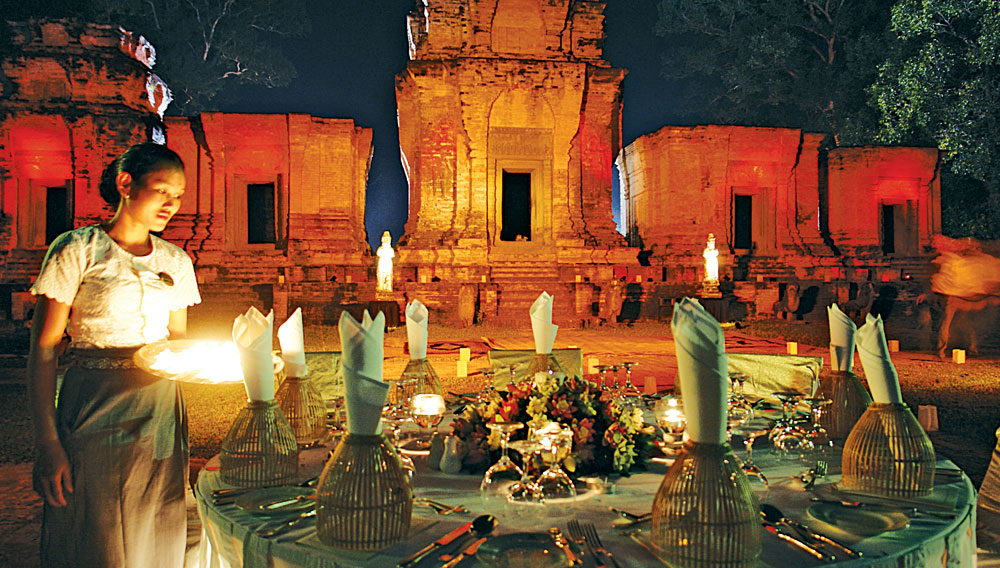 In 1858, a french botanist named Henri Mouhot set off on a journey to Southeast Asia that began with a miserable four months at sea and continued with a trek beset by monsoons, floods, feverish heat, riled elephants, and rivers of leeches. But Mouhot emerged in Cambodia to encounter a vision so magical, he wrote, that it made the traveler “forget all the fatigues of the journey, filling him with admiration and delight, such as would be experienced on finding a verdant oasis in the sandy desert. Suddenly, and as if by enchantment, he seems to be transported from barbarism to civilization, from profound darkness to light.”

That sight was the magnificent Angkor Wat, the centerpiece of the vast complex of Khmer temples outside the city of Siem Reap. Mouhot’s journals introduced the West to Angkor, and today, a century and a half later, more than 1.5 million tourists visit the archaeological park every year. But instead of Mouhot’s verdant oasis, modern-day visitors to Angkor discover ticket booths at the entrance, dry grass where there was once jungle, barking tour guides, and gridlocked temple walkways. The Angkor complex, a UNESCO World Heritage site since 1992, stands to get even more trammeled with the forthcoming Siem Reap International Airport, expected to deliver four million travelers annually by 2014.

In the face of Angkor’s surging crowds, two luxury properties in Siem Reap—Raffles Grand Hotel d’Angkor and Amansara—have started offering excursions that promise solitude among the ruins. Designed to avoid crowds and enhance the Angkor experience, these outings include private tours of areas generally off-limits to visitors; helicopter and boat charters to more remote ruins in the surrounding jungle; and unusual experiences at the temples, from elegant dinners by candlelight to yoga sessions at dawn.

Raffles, a grand French Colonial hotel that dates to 1932, offers more than a dozen tours, including formal meals at some of Angkor’s more hidden sites. On a sultry morning last year, a Raffles guide drove five guests away from the crowds at Angkor Thom and led them down a short path through the forest. In an isolated clearing, just beneath a temple ruin, a table was set with a white cloth, heavy silver and china, and clusters of orchids and roses. Four cooks and two servers stood nearby with chilled Champagne, trays of exotic fruits and pastries, and perfectly cooked omelets. The air was filled with birdsong, and the morning light illuminated detailed reliefs carved into the sandstone.

At Amansara, an intimate and stylish retreat set in the former guesthouse of King Norodom Sihanouk, guests gain special access to Angkor through the resort’s scholar-in-residence program with Roland Fletcher, an archaeologist at the Uni­versity of Sydney and director of the Greater Angkor Project. Last year, Fletcher’s program included exclusive viewings of the interior of the newly reopened Baphuon temple, site of the recent discovery of two of the largest Buddhist statues in eight decades. Sally Baughen, Amansara’s general manager, says the resort also offers such experiences as private sunrise yoga sessions, followed by breakfast, at a small temple. Which temple, however, she will not reveal: “There are still,” she says, “some secret spots.”