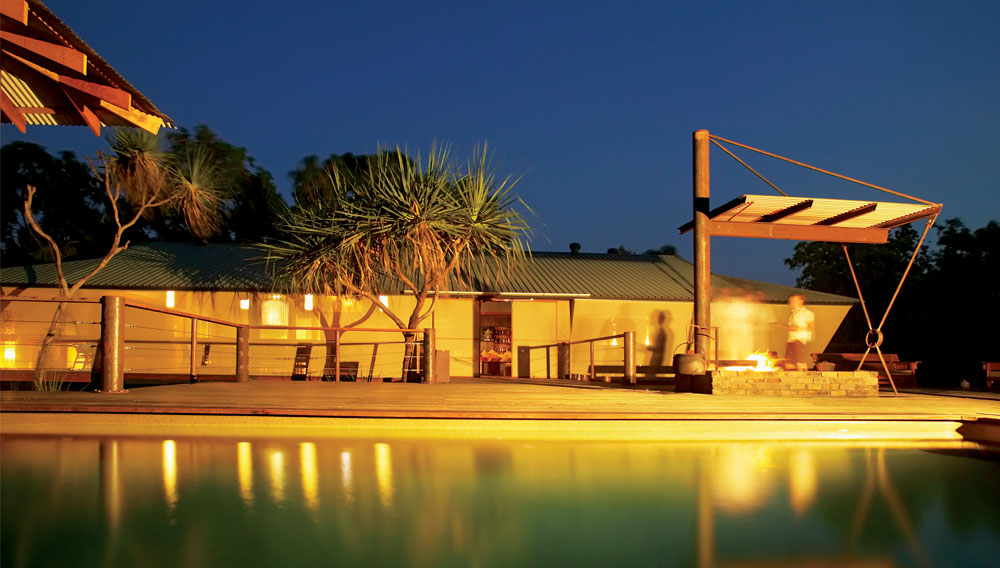 As the sun rises above the Mary River floodplain in Australia’s Northern Territory, water buffalo, wild horses, and flocks of magpie geese begin the daily trek from their nocturnal havens in the forest to the open swamp, where they will feed and cool themselves during the heat of day. At the forest’s edge, groggy travelers, many still in bed, watch this procession through the screened walls of Spartan-elegant safari bungalows. Soon, the guests will rise and embark on a morning migration of their own: toward the main lodge for a gourmet breakfast in the bush.

Thus begins a day at Bamurru Plains, a luxury bush camp that takes a small corner of a vibrant Australian ecosystem and tames it just enough to make travelers feel comfortable—but not so much that they feel at home. “Bamurru is truly unique,” says former camp manager Garry Cross. “It’s 76,000 acres of wildlife in a natural state. There is no one within hundreds of miles of the camp, so you have the whole place to yourself.”

Bamurru, which opened in early 2007, is one of four upscale ecotourism camps operated by Wild Bush Luxury, a Sydney-based company that offers rugged-yet-refined experiences in such settings as the Blue Mountains just outside the city, and the coastal dunes of Western Australia’s Cape Range National Park. At Bamurru, on a stretch of coast about 550 miles south of the tropical jungles of Papua New Guinea, professional guides introduce guests to a truly unusual ecosystem that is part dry grassland, part flooded swamp, and part forest. The area explodes with life, from the birds that cloud the skies to the exotic flora and fauna that have adapted over the aeons to the boom-and-bust cycle of monsoons followed by staggering heat and aridity. “It’s one extreme to another within the nine months the camp operates each year,” says Kat Mee, previously a senior guide at Bamurru, who now works at Arkaba Station, the company’s new property in South Australia. “There are so many different habitats—the exceptionally green and the very dry.”

Each day, guides take guests on such excursions as airboat rides to view the floodplain or Land Cruiser safaris to explore the eucalyptus forests. Bamurru also offers boat tours of a river system that is believed to have the highest concentration of crocodiles in the world.

The camp itself is small, with nine bungalows, a spacious main lodge, and a deck with a pool that offers vistas of the wetlands. In the kitchen, Australian chefs prepare three delectable meals and a host of snacks over the course of a day, which is no small feat given that the camp runs largely on solar power and the closest source of supplies is three hours away by truck. “They feed you well, entertain you with activities in the wild, and make your stay very comfortable,” says Cross. “It’s not the kind of five-star luxury you find in cities. But given the beauty of the place, in a way, it’s better.”