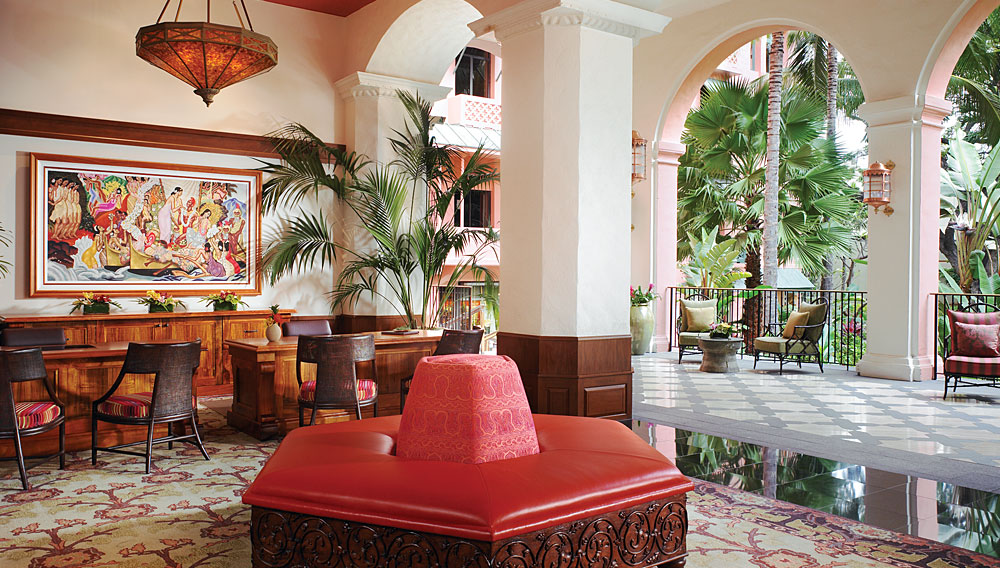 The tropical rain oscillates between drizzle and downpour as Bill Tapia takes the stage, ukulele in tow. He steps dexterously over electrical cords to reach his stool and, after readying his instrument and voice, begins to play for the 1,000 or so guests at the reopening gala of Waikiki’s Royal Hawaiian resort. It is clear that Tapia is no stranger to the stage, this one in particular: The 101-year-old Hawaiian-jazz musician played here when the hotel first opened in 1927.

Tapia’s presence at the Royal Hawaiian’s reopening underscores the importance of tradition to the property’s owners, Kyo-ya Hotels and Resorts, which this January completed a $60 million renovation of the legendary retreat. Built by Ed Tenney, president of Matson Navigation, the resort helped establish Hawaii as a tourist destination. Tenney created the then-400-room property to house travelers who took the multiday journey to Hawaii aboard his company’s luxury ocean liners. The sea-and-land excursion soon became a rite of passage for 1930s-era Hollywood stars and other wealthy West Coasters, who would arrive with their servants and steamer trunks for weeks-long vacations on the beach.

In 1941, after the attack on Pearl Harbor, the U.S. Navy leased the Royal Hawaiian as a rest-and-relaxation depot for sailors. The hotel reopened to the public on February 1, 1947, 20 years to the day after its initial debut.

The Royal Hawaiian’s most recent reopening marks the culmination of a nearly one-year-long overhaul of its public spaces and 529 guest rooms and suites. The project also included the addition of a fine-dining seafood restaurant, Azure, and three new treatment rooms at the Abhasa Spa. The owners retained the Royal Hawaiian’s distinctive coral-pink exterior, which years ago earned the hotel the moniker “the Pink Palace of the Pacific.”

Also left intact were the exteriors of the guest rooms, which, unfortunately, lack balconies (a holdover from the days when ocean-view balconies were not necessarily coveted by guests who had just spent several days at sea). Still, the Royal Hawaiian offers several settings for taking in the sights and sounds of the Pacific, including six private beach cabanas, the poolside Surf Lanai Restaurant, and the newly refurbished Mai Tai Bar.

Out in the hotel’s Coconut Grove gardens, as the rain intensifies and the likelihood of an electric shock increases, Bill Tapia finishes his brief set. But the festivities continue, with Lotus dancers gliding in sync through the pool while pink fireworks light up the sky. The guests then take to a stage on an ocean-view terrace, dancing to jazz and celebrating the newest chapter of what Tapia refers to as “the best damn hotel in the world.”