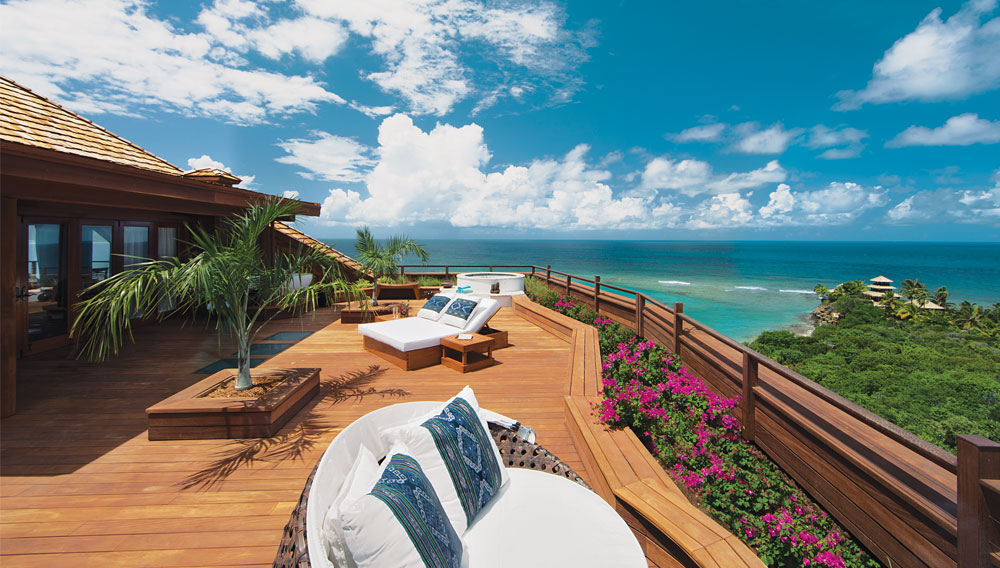 Most days on Necker Island pass slowly and without stress. Pink flamingos amble among the mangroves of the Richard Branson–owned resort, while Madagascan lemurs swing lazily from the trees. Guests of the British Virgin Islands property tend to follow the lead of ET, the resident red-footed tortoise, who spends his afternoons lounging in the shade of a palm tree.

But Necker’s tranquil pace was disrupted on August 22, 2011, when lightning struck the property during a violent tropical storm. The ensuing fire engulfed the resort’s main structure—the eight-bedroom, tiled-roof Great House—in which Branson’s family slept. Everyone escaped safely (including ET, though his feet were badly burned), but the home was destroyed.

Two years later, a bigger and better Great House has risen from the ashes. Debuted in October, the new building assumes the same Balinese style of the original house but features an additional 11,000 square feet plus several 21st-century improvements.

Each of the nine guest rooms in the new Great House has an en suite bathroom and balcony. A 1,500-square-foot master suite, which occupies the house’s entire upper level, features an ocean-view terrace and a two-person hot tub. The house also includes a crow’s nest, an expansive deck adorned with hammocks and sofas, and a mirrored room that can be used as a Pilates studio or cinema. Throughout, the island’s picturesque views remain the focus, especially in the Great Room, which overlooks Virgin Gorda, the uninhabited Prickly Pear Island, and Branson’s neighboring Mosquito Island, where a private residential community is currently under construction.

Branson purchased the undeveloped Necker Island in 1978 for £180,000 (well below the listing price of £3 million). Six years later, the 74-acre island debuted as a private resort, catering to the British mogul’s well-heeled friends and other privacy-seeking travelers. Today the property, which is generally booked by a single party of as many as 30 guests ($60,000 per night, all-inclusive), is one of the world’s most exclusive retreats, hosting an elite clientele of billionaires, Oscar winners, and royalty. But the atmosphere on the island is strictly casual, with an attractive young staff popping bottles of Beaumet Champagne Necker Island à Epernay by the pool, and a fleet of Kawasaki all-terrain vehicles transporting barefoot guests along sandy pathways.

With the bulldozers gone and the construction complete, Necker Island is once again peaceful, the Great House’s golden-tiered rooflines peeking out among the palm trees like a rising sun. To the north, off Anegada Island, the sea swells above the world’s fourth-largest barrier reef, tempting guests to hop on a surfboard or explore the marine life below in the resort’s aero submarine. Like ET, however, most visitors to Necker will be perfectly content to while away the days at the island’s slow and steady pace.