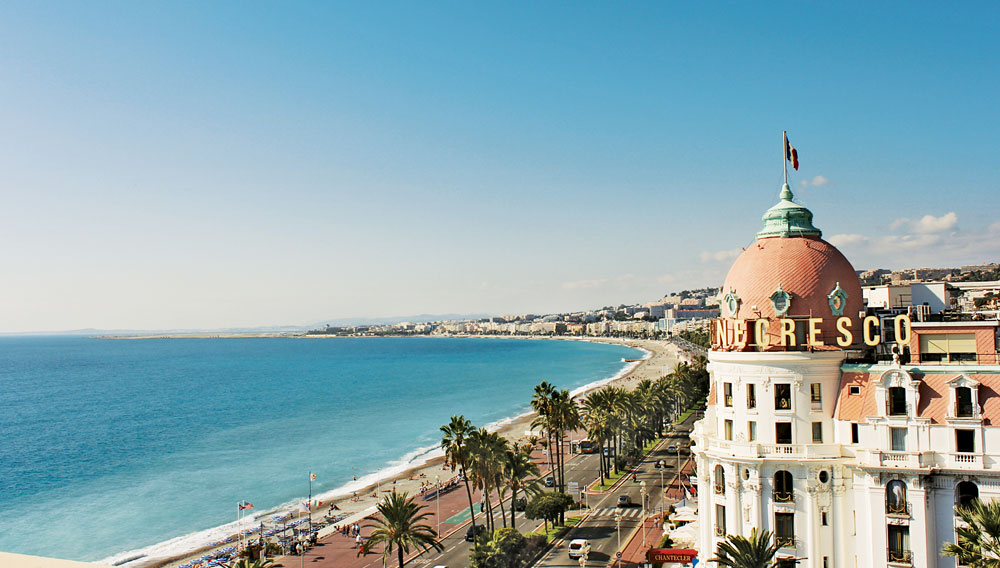 Opened in 1913, the Hotel Le Negresco occupies the pole position on Nice’s Promenade des Anglais, a scenic boulevard that follows the city’s coastline along the Bay of Angels. Capped with a pink-domed tower, the six-story belle epoque landmark overlooks the Mediterranean Sea from across the road and has long been a favored retreat for luminaries ranging from European royalty to the Beatles. The Negresco closed its doors in 2010 to embark on a six-month, $15.4 million renovation in advance of its 100th anniversary this year. The project, which has since continued with an additional $3 million in improvements, is one of several local undertakings aimed at reviving Nice as an ultimate French Riviera destination.

The year 2010 also marked the 150th anniversary of Nice’s reunification with France. Mayor Christian Estrosi chose the occasion to announce and launch an ambitious plan to transform the city—already the second-most-popular French tourist destination, behind Paris—and the surrounding area into one of the world’s premier vacation spots.

Much of Estrosi’s plan focuses on an area just west of Nice at the mouth of the Var River, where a nearly 40-square-mile region is being developed as a green metropolis called the Côte d’Azur Eco-Valley. In three years, the Eco-Valley will host the Union of European Football Associations’ championship soccer matches, known as Euro 2016, at a $213 million, 35,000-seat stadium that is currently under construction. The stadium is expected to produce its own energy and will utilize technologies to recycle groundwater for the playing field and harness wind for natural air-conditioning. The Eco-Valley is also projected to become the home of more than 10,000 new businesses—many of them specializing in renewable energy—in the next 30 years.

In Nice proper, the municipal government is improving the transportation infrastructure to facilitate easy connections to and from the airport, regional trains that connect the entire Cote d’Azur, and the local tram network. Nice’s large network of bicycle paths continues to grow; there are now 120 bike-rental stations throughout the city. For both cyclists and pedestrians, the city is developing a nearly 30-acre green corridor of parks and public areas (scheduled for completion by the end of this year) that will connect the Museum of Modern and Contemporary Art, the Théâtre de Verdure performance center, and the Promenade des Anglais.

The top address on the Promenade des Anglais is currently putting the finishing touches on its own makeover, which has included the renovation of all 96 guest rooms and 21 suites. The new and improved Negresco features six guest floors, each of which adheres to a different artistic theme. On the fourth floor, for example, a corridor is dedicated to—and decorated with original examples of—the works of Salvador Dalí, who was a confidant of the hotel’s owner, Jeanne Augier. Like her hotel, the nonagenarian proprietor, CEO, and interior decorator (and resident of the sixth floor) is a local legend at the heart of Nice’s revival.