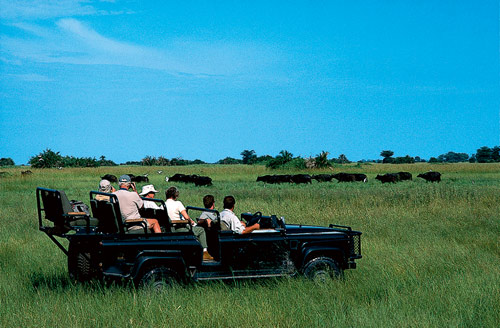 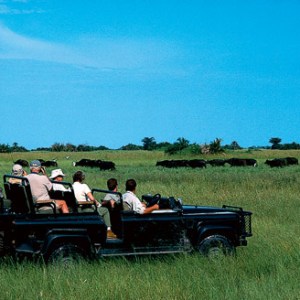 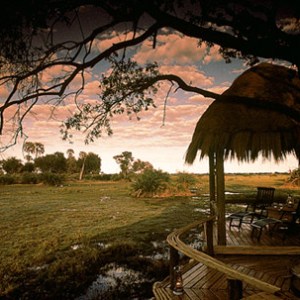 I have a confession to share: I am not an animal person. Friends’ pets frighten me with their pouncing and slobbering; I find zoos rather pedestrian; and don’t get me started on the critters that destroyed my garden last summer. So what, one might ask, was I doing in the middle of Botswana within a stone’s throw of lions, leopards, zebras, giraffes, hippos, elephants, and cheetahs? In all honesty, loving every minute of it.

My journey through Botswana’s Okavango Delta was booked with Wilderness Safaris, a South Africa–based company that has camps in Botswana, Malawi, Namibia, South Africa, Zambia, and Zimbabwe. The camps are classified by the paw system: from three paws (guests erect their own tents) to six paws (you stay in exclusive safari lodges with en suite facilities). Given my trepidation for the wild, I settled on stays at two five-paw camps—both set on raised platforms to keep you far above the roaming wildlife—where accommodations were comfortable, yet outdoorsy.

Of course, the real adventure comes during the daily guided game drives. Each morning at 6:30, the group of about 12 gathers for a quick but hearty breakfast, then loads into the open 4×4 vehicles for a four-hour ride. Depending on the time of year and the location of the camp, the terrain can be dry (in the lower part of the delta) or very wet (farther north, where the annual floods wash in). You can spot animals such as lions, elephants, and impalas in the lower delta, while the hippos, gators, and beautiful species of birds and flora thrive in the wetlands. Exploring in the upper delta also includes rides in mekoros, similar to canoes, through lily-filled lagoons.

After the morning outing, where all eyes are glued to the landscape in search of wildlife or their tracks in the sand, guests return to camp for a large brunch and an afternoon of rest. The exhilaration of spotting animals, documenting your finds, and snapping photos tends to be a bit tiring. Of course, it doesn’t stop anyone from joining the evening game drive, where you have the chance to encounter more wildlife and enjoy the stunning African sunsets, cocktail in hand. The anticipation at night centers on following the large spotlight that the “tracker,” who sits on the front hood of the 4×4, slowly pans from one side of the plains to the other.

The wonder of safari is observing how majestically the animals live in their natural habitats. It is a true privilege to witness their rituals of playing, protecting their young, even mating. And although the first couple of days on safari seem like you’ve reported to a movie set—my fellow passengers and I joked that we were waiting for the director’s call: “Okay, cue the elephants!”—there is never a doubt about who is in charge. The 4×4 drivers keep a safe distance from the animals, a constant reminder that you are a visitor on their turf. Sometimes, you let them just work their way around you, as we did the night a hyena rushed toward our vehicle before darting away at the last minute.

Between the moments of sheer amazement and the times of quiet observation, my delight of safari surprised even me. While the chance of allowing a dog to lovingly lick my face still remains mighty slim, another opportunity to observe animals grandly ruling their kingdom is one I would not let pass.