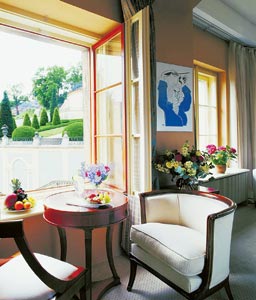 Ivana Stehlikova scans the assortment of books, CDs, and DVDs in the library at Prague’s Aria Hotel. As the music director for the Aria—the Czech capital’s newest and finest boutique hotel—Stehlikova manages the library’s music selection, assists guests with concert tickets, and shares little-known facts about the city. “Einstein lived in Prague,” she tells me. “He played violin, you know.”

I did not, but an Internet search back in my room confirms it: Einstein played violin as a youth and was often seen as an adult walking the streets of Prague, instrument in tow. Yet this city owes its musical renown not to the Nobel physicist. Mozart conducted his debut performance of Don Giovanni in Prague in 1787; Beethoven often traveled here from Vienna to perform; 19th-century Czech composers Bedrich Smetana and Antonín Dvorák taught and died in the city. These musical legends frequented the left-bank neighborhood of Mala Strana, where today, off a plaza known to locals as Music Square, veteran hotelier Henry Kallan has appropriately opened the musically themed Aria.

Kallan worked with Italian architect Rocco Magnoli, designer of Gianni Versace’s signature boutiques, to create the Renaissance-style Aria. The 52-room hotel, which opened in September 2003, occupies a building that once housed the city’s secret police force. Each of its four floors is dedicated to a specific musical genre—jazz, classical, opera, and contemporary—while individual rooms honor a particular composer, performer, or group, ranging from Vivaldi and Verdi to Billie Holiday and ABBA.

But the Aria is significant for more than its musical motif. It is the first luxury hotel to open in Prague since the devastating floods of 2002, and it presents a rare modern lodging option in this 1,000-year-old city. Rooms feature DVD players, computers with complimentary Internet access, Frette linens, and rain showerheads. Whimsical caricatures of each room’s featured musician, created by Czech artist Josef Blecha, hang on brightly colored walls. Musical notes, woven seemingly at random into the carpet, appear to have spilled from sheet music that once cascaded along the ceiling. The hotel’s public areas include a screening room (equipped with acoustics fit for an audiophile), where guests can view musical performances on DVD, and the Winter Garden, an informal meeting space where local businessmen hammer out deals and small groups gather on oversize sofas for conversation and lattes.

Much of the chatter revolves around the evening’s musical entertainment. How should one choose between an organ recital at St. Vitus Cathedral in Prague castle, opera at the Theater of the Estates, or a concert at the famous Rudolfinium? Such questions are Stehlikova’s call to action: She helps guests select their excursions and arranges for the finest seats in the house. Her knowledge and enthusiasm are infectious, providing even short-term visitors a lasting connection with the city’s musical heritage.

Back in the library, Stehlikova expands on Einstein’s deep connections with music. Once, she says, when asked by a young reporter if he could write a description of his theory of relativity in 48 words or fewer, Einstein thought for a moment and replied: “No, I can’t. But if you gave me a violin, I could play it.”

To describe the charms of modern-day Prague presents a similar dilemma. Now, at least, there is a place from which visitors can not only see the city’s beauty, but listen to it as well.